Shaka Zulu is one of Africa and the world’s most well known historical figures.

In 1986, the 10 Part TV Series Starring Henry Cele Shaka Zulu was released, and in my view it has stood the test of time.

It tells the story of Shaka Zulu as it emerges from British records of a desperate British Colonial Office Psychological Operation designed to  curtail the Zulu Army’s advance on the British Colonial settlement at the Cape circa 1824.

The British acknowledge that they are powerless against the Zulu Army and unable to mount a force from Britain in order to repel the Zulu advance. As a result, a plot is hatched by the British Colonial Office to instead dispatch a 12 men group led by Lt Francis farewell under the pretext of forging an alliance between the British Crown and the Zulu Kingdom.

Its designed ultimately to gather intelligence on the Zulu whilst delaying the advance of the Zulu Army on the British Settlement at the Cape.

Farewell and his men land on the Zulu Coast in 1824, and through the lens of the White Man’s first encounter with the inner sanctum of the Zulu Empire, the story of Shaka Zulu is told through the diary kept by Irish Doctor Francis Fynn, one of the most important members of Farewell’s expedition. 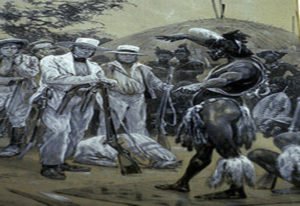 Shaka Zulu is not a Historical account of Shaka Zulu although its based on certain Historical sources like the diary of Francis Fynn and British Colonial Office Records at the Cape.

The Artistic licence taken by the Director frequently throughout the Series suggests that Shaka Zulu, is to be appreciated primarily not as History but a ‘Hero Epic’ similar to ‘Troy’, ‘Hercules’ and Mali’s ‘Epic Of Sundiata’.

Shaka’s story is told as the classic Hero’s journey familiar in Joseph Campell’s ‘The Hero With A Thousand Faces’.

Conceived out of wedlock, Shaka’s birth according to Zulu legend was the fulfilment of a Prophecy that would see the rise of a Zulu Messiah or Son of the Heavens who would lead the Zulu Nation to glory and immortality.

The events in Shaka’s life fall within the broader framework of destiny…However, like all classical heroes, Shaka also has the freedom of choice.

It would be the choices that he makes in his encounter with the White Man or the ‘Swallows’ that would eventually prove his undoing.

The Life and Times Of Shaka

Shaka was the illegitimate Son of Zulu Chieftan Senzangakona.

He would bear this stigma for the rest of his life, and perhaps it served as the fuel for his ambition.

His Mother Nandi was cast out of the King’s Kraal and that of her home, the Langeni Tribe circa 1802. After wandering homeless, Shaka’s mother finally found refuge amongst the Mthethwa.

When Shaka was 23, he was conscripted into Chief Dingsiwayo’s rising Mthethwa Confederacy Army where he had an outstanding six year military career.

When Shaka’s enstranged father Senzangakhona died in 1816, Dingiswayo assisted Shaka in a coup to claim the Zulu Throne.

Once he had assumed Kingship of the Zulu Shaka embarked on a revolutionary Military program.

He re-equipped the Army with short stabbing Assegai spears and long defensive shields for close combat.

A Regimental system was also introduced with different Ranks distinguished by Uniforms, Shields and Headdress of different Colours.

Shaka would also introduce the ‘Cowhorn Formation’, which can best be described as a spear-headed human battering  ram.

The Zulu attacks were devastating and revolutionised Warfare in South-East Africa, and after Dingiswayo’s death in 1817, Zulu expansion continued until Shaka had conquered his biggest rivals, the Nndandwe and the Qwabe Nations.

Its been argued that Shaka’s expansionist Wars began a period of upheaval referred to as the Mfecane as defeated Tribes fled deeper into the African interior, conquering and displacing other Tribes in a vicious cycle of continuous disruption, displacement, violence, chaos and Warfare.

Whilst there is some evidence to suggest a period of massive social change in Southern Africa in the 1820s, its also been argued that the Mfecane has been greatly exaggerated and was mainly a a form of Colonial Propaganda to justify establishing a British Protectorate in the Natal Area for the purposes of obtaining Ivory. 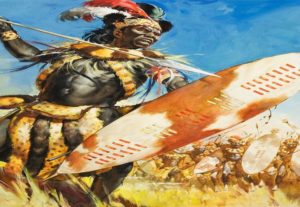 The first Europeans arrived in Shaka’s Kingdom around 1824.

The settlers of the Farewell Trading Company dispatched as an intelligence gathering diversion by the British Colonial Office would soon make contact with Shaka, setting in motion the events in the TV Series.

Shaka Zulu is probably best enjoyed once its appreciated as a cinematic portrayal of History.

There was an effort to really embed the audience in the world of Shaka and the Zulu in the 1820s. The costumes and portrayal of African culture such as dances and rituals remains one of the best ever I’ve seen on Film.

However, beyond the aesthetics, the genius of Shaka Zulu is in its Shakespearean acting and dialogue. The acting in Shaka Zulu is stellar and its clear that a lot of effort was put into every single scene.

Whether we are in the private bedroom Chamber of King George as he sits at breakfast discussing the pressing matter of the Zulus with representatives from the Colonial office in the presence of his Concubines, or we are in the heart of the Zulu Nation as Shaka’s personal advisors warn him against the ‘Swallows’, the dialogue paints the Shaka Zulu story in vivid detail as a human tragedy.

In the end, Shaka’s curiosity about the Swallows with the aim of harnessing their powers for his own purposes in the pursuit of his own relentless ambition proves to be his undoing.

Things begin to unravel as he begins to rely heavily on the Swallows after a near fatal stab wound following a failed assassination attempt is treated successfully by Dr Fynn.

Shaka begins to harbour exaggerated ideas of the White Man’s powers which Farewell encourages in the hopes of convincing Shaka that an alliance with the British on equal terms is indeed a possibility.

After his mother’s death in 1827 Shaka becomes desperate and unhinged as he realises that the Swallows cannot resurrect her.

Furthermore, the promised alliance with the British does not materialise as Shaka’s emissaries to the British Crown are treated with disdain at the Cape Colony, revealing the deception of Farewell’s promise and the naivety of his own beliefs.

In the end, Shaka realises that he has gambled the future of his Empire on misplaced trust, but the damage has already been done. The nation is now in chaos after he has declared a period of mourning and incessant expansionist Wars.

Shaka reveals the dark depths of his disillusionment in a classic dialogue scene in which he frankly tells Farewell that the Swallows have deceived him, placing his entire life’s work and Empire at risk by taking advantage of his naivety, ambition and arrogance.

For the first time, he expresses to Farewell that he understands now how the British have always perceived him from the start…A Monkey that Farewell was sent to tempt and trap with something shiny.

In this case, the allure of an alliance on equal terms with the White Man which Shaka simply could not resist…A fatal mistake.

Not only does this scene reveal the depth of Shaka’s tragedy, but also the complex relationship between Coloniser and Colonised in the Colonial game of Chess.

For instance, despite his own initial mischievous intentions, Farewell appears genuinely guilty and remorseful for being the hand that destroyed what he had now come to appreciate as a mighty African Empire worthy of his and British respect.

However, his ‘remorse’ is useless to Shaka and the consequences of the Colonial Office scheme that had sent Francis into the Zulu heartland can no longer be undone.

You will not see the personal dimensions and psychological contradictions faced by those directly involved in Colonialism dealt with in this manner in a History book.

Dialogue is also used with great comic effect throughout the series in the tensions between the various characters and subplots…The dialogue in Shaka Zulu is truly a gem and its sprinkled generously throughout the Series.

In the end, Shaka’s people lose faith in their Emperor, and after a failed Military campaign on the outer reaches of the Empire, a coup led by Shaka’s two half Brothers leads to his assassination and the end of Shaka’s reign in 1828.

Whilst Shaka Zulu suffers from some typical Blaxploitation tropes, particularly when it caters to the need to portray Shaka as ruthless, vengeful or ‘bloodthirsty’ in certain scenes as well as in its one-dimensional negative stereotypical portrayal of African Traditional Healers, in the end, it excels in its main focus which is to tell the Hero Epic of Shaka Zulu as a human tragedy that unfolded once upon a time in Africa when an ambitious and intelligent African man was forced to confront the forces European expansionism in Africa.

For this reason, the Shaka Zulu series still remains exciting and relevant today, perhaps because the Hero’s Journey it tells will always be a universal human story.

The quality of the production particularly the dialogue, costumes and portrayal of African daily life will ensure that it will stand the test of time for future generations to enjoy.

One can only wonder what could have been had Shaka’s progress not been impeded by the British. Nevertheless, Shaka’s legacy continued to inspire the Zulu Nation as Zulu resistance to Colonial Rule proved to be stubborn.