The Zulu resistance led to a victory at the Battle of Isandlwana which stands out as one of the most signficant Pre-Colonial military encounters in which Africans successfully repelled an invading Colonial Army.

The Battle of Isandlwana Zulu resistance took place on 22 January 1879 initiating the Anglo-Zulu War between the Zulu empire and the invading British Army.

It was a battle in which the Zulus armed with traditional weaponry such as assegai spears and Cowhde shields faced off against a British Army equipped with modern Rifles and artillery.

Background To Battle Of Isandlwana

In 1878 the British started an expedition across the Tugela River and into the Zulu heartland with the aim of invading and occupying Zululand.

In response, the Zulu King Cetshwayo summoned 24, 000 Troops to counter the British offensive.

In January 1879, the main British Column arrived at Isandlwana Hill, setting the stage for a confrontation with the Zulu regiment that had been dispatched to intercept the British.

The Battle Of Isandlwana

On the 22nd of January 1879, the Zulus and the British made contact as the main Zulu force descended on Isandlwana.

Despite their superior firepower, the British were ountnumbered and a series of poor tactical decisions left the British vulnerable to the experienced Zulu Military machine.

The British failed to form a proper denfensive line or ‘laager’ and were devastated by the Zulu ‘Cowhorn’ formation attack which destroyed the poorly protected British flanks.

As the British ran low on ammunition, the British camp was overrun and the invading force virtually wiped out after a series of desperate last stands. 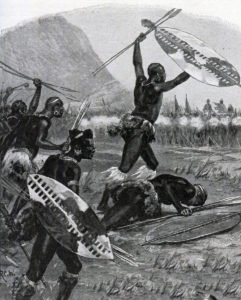 Legacy Of The Battle Of Isandlwana Resistance

The Battle of Isandlwana demonstrated that African Armies had the capacity to resist technologically superrior invading European Armies, and it was the worst defeat suffered by the British against a local African force.

Nevertheless, the Battle Of Isandlwana would prove only to be the opening salvo in the Ango-Zulu War which would culminate in the conquest and destruction of the Zulu Empire under King Cetshwayo in 1879.

The Zulu victory at Isandlwana will always stand out as an example of successful African military resistance to Colonial rule.