Home » Alternative History » The Anunnaki & The Tower Of Babel Incident

In this entry we explore the Bible’s account of the Tower Of Babel incident and its link to the Second Sumerian Anunnaki Pyramid War, as recounted in Zechariah Sitchin’s Earth Chronicles Book 3, The Wars Of Gods and Men.

Grudges and Succession feuds amongst the Anunnaki would erupt into the 2nd Pyramid War in which an attempt was made to build a new Spaceport by Marduk so he could independently contact the Anunnaki Home Planet Nibiru.

As Sitchin contends in the Earth Chronicles’ Wars Of Gods and Men, the 2nd Pyramid War would eventually end in Nuclear destruction of the Sinai Peninsula Spaceport, the Biblical Cities Of Sodom and Gomorrah, and the Sumerian Civilization itself.

The Causes Of The Sumerian 2nd Pyramid War


After the flood, the Anunnaki were settled in their allocated regions in which they exercised their powers administering the various Anunnaki City States in which they were the appointed God.

Tensions and ambition for control still remained beneath the surface, and in particular, it would be the ambitions of ENLIL’s granddaughter INANA/ISHTAR for the improvement of her territory in the Indus Valley Region as well as to extend her influence to Egypt that would lead to the outbreak of the Second Anunnaki Pyramid War.

According to Sitchin, INNANA sought to extend her territory to Egypt by getting engaged to ENKI’s Son, DUMUZI who stood to inherit the ABZU (Africa) Region and its attractive Nile Valley Region from his Father ENKI.

INANNA’s plot did not succeed however as DUMUZI died a premature death by drowning.

INANNA and the ENLILITES believed that MARDUK, ENKI’s other Son and DUMUZI’s brother was responsible for his death as part of a plan to block INNANA’s path to the Egyptian Throne which MARDUK regarded as his personal inheritance.

INANNA sought Justice, and her father EN.LIL sent a message to EN.KI demanding that MARDUK be brought before INANNA’s Clan for Judgement, but EN.KI denied the request.

This would set the ENKIITE and ENLILITE clans on the path to War.

Inanna’s Ambitions For The Indus Valley

Sitchin suggests that the Anunnaki built Civilization according to knowledge encoded on Templates or ‘MEs’ held in custodianship by ENKI and ENLIL.

Amongst other things, these MEs, were the basis for the Rules of Time and Temple construction.

INNANA sought to develop the Indus Valley Region under her control and needed the knowledge encoded on the MEs held by ENKI at his City in Eridu in order to do so, and she resolved to steal the MEs she needed from ENKI by getting him drunk and stealing the MEs while he slept.

INANNA visited ENKI at his Temple in Eridu where after a meal and some drunken sex, she managed to steal the MEs from ENKI’s Temple while he was in a state of drunken sleep.

When ENKI eventually woke up and discovered what had happened, he demanded the return of the MEs from INNANA through ENLIL.

However, INANNA told ENLIL that ENKI had voluntarily given her the Templates, and EN.LIL sided with her.

In response, MARDUK decided to erect a new City called Babylon where an effort to build a tower high enough for him to  ‘reach the heavens’, or rather a Spaceport facility to enable him to communicate directly with Nibiru from Earth without relying on the Sinai Peninsula Spaceport facility was made. 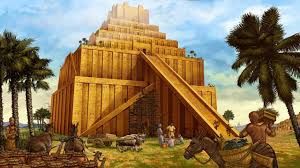 ENLIL aghast at MARDUK’s determination caused the language of Marduk’s followers to be confused so that they would not be able to understand one another in order to build the new Spaceport facility.

MARDUK was only temporarily thwarted as the The Tower of Babel incident signified MARDUK’s pemanent intention to acquire his own means of communicating  with the Home Planet Nibiru, and his continued efforts would lead to full scale War between the rival Clans of Enki and Enlil for the control the Sinai Peninsula Spaceport facility.

As Nuclear Weapons were unleashed on the Sinai Peninsula Spaceport, the Cities of Sodom and Gomorrah as well as the Sumerian Civilization itself were destroyed by a Nuclear Wind.

However, MARDUK’s new City Babylon was spared from the effects of this Nuclear catastrophe, inaugurating the Age of Babylonian supremacy in Mesopotamia and the departure of the majority of the Olden Anunnaki Gods from Earth.

The Tower Of Babel Incident appears to have a more complete context in the Sumerian records which record it as part of a larger ongoing contest for supremacy on Earth between the Anunnaki.

In doing so, it removes the Supernatural aspect of these events as suggested in the Bible and instead presents them as ordinary Political conflicts.

The events leading up to the Tower of Babel Incident and the destruction of Sumer after the nuclear attack on the Sinai Spaceport are recounted in Sitchin’s Lost Book Of Enki.