“Beulah was running.Maybe this was where it started, Jo thought. Maybe Beulah was seeing something more clearly on the nights she had these dreams, a little black child fighting in her sleep against an opponent she couldn’t name come morning because in the light the opponent just looked like the world around her.

Beulah ran in her sleep, ran like she’d stolen something when really she had done nothing other than expect the peace, the clarity, that came with dreaming.

Yes, Jo thought, this was where it started but when, where, did it end?” Homegoing, pg,120

Homegoing by Yaa’s Gyasi is a powerful,confident narrative , beginning with Maame who gives birth to Effia and Esi, two sisters who through a series of unfortunate circumstances are never allowed to meet or know each other. A layered multi-generational family story then unfolds over 250 years during Ghana’s Middle Passage Slave Trade to the bonds that forever tie modern day America and Ghana

Effia is married off to a British white man, James Collins and moves to Cape Coast Castle to live with her husband, meanwhile Esi is captured when her home is attacked and she is sold to slave traders.

Unbeknown to the sisters, in one brief moment both Effia and Esi are located in one place, Cape Coast Castle, one as the wife of a slave trader, and the other as a captive in the castle’s  underground dungeon, awaiting to be shipped to the infamous place of no return. 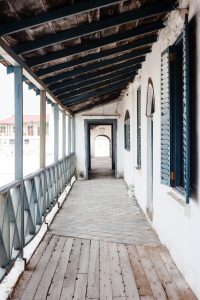 Gyasi’s confident, fluid prose in her debut novel Homegoing is not about blame or heroes.

This story is about remembering, giving faces and names to people who suffered unimaginable atrocities. People filled with dreams, hope,love and had families, all shattered to smithereens by greed and abuse of power.

Gyasi through the descedants of Effia and Esi knits together beautifully the pain, loss, trauma and hope that still reverberates in modern day America, particularly for black Americans.

Homegoing is about the continious re-definition of what is and who is Home? It also interrogates identities and how they’re tied in to all the ancestors , the victims and pepetrators of slavery and the impact thereof.

The nuances of what was lost, who was lost and the journey of becoming in-spite and because of all that has happened, is happening now and will happen for future generations coming.

A relevant narrative today were society continues in ‘Othering’ and grappling with racism, tribalism at the intersection of politics, greed and power.

A must read for any curious mind!