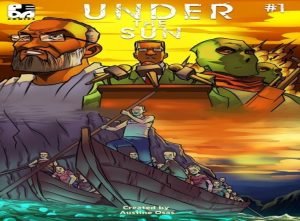 Under The Sun is set in Zamia, a fictional Central African Country where people with Albinism have been forced to migrate to the Island of Kurume in the middle of Lake Tanganyika after being pursued relentlessly for their body parts intended for use in Magical potions.

The Albino residents of the isolated island live peacefully under Government protection until the President is assassinated, and a Civil War breaks out causing chaos and insecurity that threatens the survival of the isolated community.

This situation brings firmly into focus certain anachronistic attitudes and beliefs in relation to Albinism which regrettablyÂ  still prevail amongst some people in Africa today…In particular, the unfair discrimination of people with Albinism, the familiar concept of ritual murder, and the use of body parts as some kind of Talisman to help achieve individual success eg in business or Politics.

In this way, Under The Sun taps into Taboos that resonate with Africans and anyone concerned with Human dignity, life and liberty.

Relevant Socio-Political questions are thus explored within an alternative universe that incorporates elements drawn from actual events and places…For instance, the Island of Kurume is based on a real Island for people with Albinism situate on Tanzania’s Lake Victoria. In addition, the assassinated President draws inspiration from the real life assassination of former Nigerian President, Murtala Mohammed.

According to the creator of Under The Sun, Austin Osas, the assassination of the President is based on a dark Political ideology on a grander scale of evil than the tribal, ethnic and religious motivations usually behind most African conflicts… In addition, it also promises to explore the consequences of blindly following demagogues together with the sycophantic Politics which sacrifices open debate and criticism at the altar of Political expedience and personal gain which corrupts individual conscience and the moral ethos of the State.

The inevitable result is the oppression of the most vulnerable members of Society.

In this way, Under The Sun can be understood as Social Science fiction, focused more on the examination of Society, human behaviour and anthropology, and less on technology and space opera.

Under The Sun shines a much needed torch in one of the darkest corners of the African experience, and I hope to read more works of this kind that utilise speculative fiction as a means to confront questions from deep within the belly of Africa.

I’m certainly eager to download the next installment of Under The Sun, andÂ  it reminds me of of Philip K Dick’s The Man In The High Castle which uses an alternative Post World War 2 setting in which Germany is victorious instead of America and its allies. Philip K Dick’s books have inspired such classic and perhaps even Prophetic Science fiction Films like Blade Runner steeped in discourse on ultimate questions.

In the same vein, Under The SunÂ is an exploration of a dark lingering aspect of the African experience which continues to demand attention and ultimately constructive resolution.

You can download the first installment of Under The Sun on the Pedacomics website, and the Phillip K Dick documentary below is also great if you would like to know more about Phillip K Dick, his influence on the genre of Science fiction, and the concept of speculative Sci-fi driven by the desire to confront and resolve anthropological and ultimate questions.

If you Publish or create African Science Fiction, please feel free to contact me because we would like to bring attention to relevant works in this genre on a more regular basis.

In the meantime, if you would like to check more Afrofuturist Comic Artwork, please visit our Pinterest Page here.