Investigation Of The Ruwa UFO Incident

Reasons For The Ruwa UFO Visit

Perhaps the other unexplored explanation for an extraterrestrial visit to Zimbabwe could lie in Zimbabwe’s Ancient History.

Current speculative arguments suggest that Ancient Sites like Great Zimbabwe are linked to other more Ancient sites around the World in which Civilization was first developed The most notable of these Ancient Sites in my view is the Temple of Gobleki Tepe in Turkey, the world’s first Temple dating back more than 12 000 years.

Archaeological findings at the site coupled with arguments from both mainstream and alternative researchers suggest that the Gobleki Tepe Site is the home of the Proto-Culture of Civilization that spread around the world to Mesopotamia, Egypt, Meso-america, the Indus Valley and Southern Africa.

Indeed, the mystery presented by other African Tribes such as the Dogon of Mali whose Nomo God Culture bears close resemblance to the Ancient Egyptian Sirius Star Religion suggests that Africa shares a hidden history with the rest of the world which is now presently being uncovered and explored although we are not yet certain where it will lead.

With this in mind, the Ruwa UFO Incident may be part of a continuing contact between Zimbabwe and Extraterrestrial entities that stretches from the earliest days of not only African Civilization, but Civilization on Earth itself with Zimbabwe being one of the areas that has been chosen and constantly monitored for Thousands of years since Ancient Times.

For example, the resemblance between the Vulture Bird stone excavated at the Gobleki Tepe Site, and the official Zimbabwe’s Hungwe Bird symbol of the Great Zimbabwe Culture raises questions about the links between Great Zimbabwe and other Ancient Proto-Cultures around the world stretching all the way back to the first Temple at Gobleki Tepe. 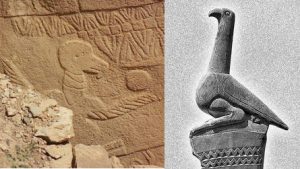 Ultimately the children, adult school teachers and UFO Researchers involved in the Ruwa UFO Incident are convinced that the event was a real Alien Encounter.

We may never know the reasons for the encounter, but the telepathic messages received by the Children from the mysterious visitors coupled with Great Zimbabwe’s possible links to other Ancient Civilizations around the world whose Proto-Culture may have been founded by the unknown and possibly Alien Founders of the Gobleki Tepe, Mesopotamian, Egyptian, Meso-American and Indus Valley Cultures suggests that the Ruwa UFO Incident may have been part of an ongoing contact and Alien observation of human progress that dates back Thousands of years.

The documentary The Ariel Phenomenon investigates the Ruwa UFO Incident providing further updates and information up to 2012 including interviews with the school children as adults who still stand by their initial account of the incident as a UFO encounter.

The Meaning & Purpose Of Afrofuturism

The Conquest Of Native American Nations