The Sumerian Civilization is frequently viewed as remarkable because it allegedly sprang out of ‘nowhere’.

The Ubaid Period Culture is responsible for the enigma of the Ubaid Lizardmen who some have linked to the Anunnaki Ancient Aliens Civilization of Mesopotamia which immediately followed the Ubaid Period.

The perceived suddenness of the Sumerian Civilization is used as grounds for demonstrating Extraterrestrial intervention in Mesopotamia dating back at least 6000 years ago.

In this entry on the Historical origins and development of the Sumerian Civilization, we examine the origins of Sumer which can be traced to an earlier Ubaid Period Culture as well as its unexplained Lizardmen aretfacts found in the Mesopotamian Region. 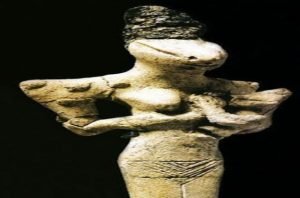 The first human settlements in Sumer were from 4500 to 4000 B.C., and its quiet probable that they date to an even earlier period.

The Ubaid people were the first Settlers and are notable for developing farming, raising cattle, weaving textiles,Â  carpentry, pottery, and brewing beer.

Ubaid farming communities also built towns and Village settlements including small Temple structures which would later serve as the blueprint for the much larger Sumerian Temples such as the Great Ziggurat at Ur.

After a period of interaction mainly through trade in metals and minerals most notably the Lapis Lazuli which later became a Sumerian signature used in Jewellery and State monuments like Babylon’s famous Gate Of Ishtar, the Ubaids intermingled with surrounding Groups to form the group collectively referred to as ‘Sumerian’.

This later period from around 3000 BC marked the beginning of Sumerian Civilization proper beginning with the construction of Eridu, the first Sumerian City State.

Eventually these City States expanded to include Nippur, Lagash, Kish, Ur and Uruk.

An unresolved mystery of the Ubaid period is the Ubaid Lizardmen serpent idols that were uncovered during archaeological excavations.

The Ubaid Lizardmen resemble Serpent Gods and the Anunnaki Ancient Aliens Extraterrestrial entities which some suggest were responsible for infusing the Ubaid culture with the knowledge and tools to implement the early Ubaid period Civilization. 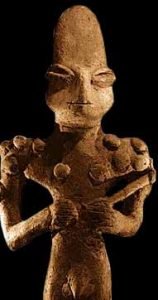 Unfortunately, unlike the Sumerians who developed Cuneiform writing, the Ubaid Culture did not develop writing and as such, there is no written account of the role the Ubaid Lizardmen serpent idols played in Ubaid period Culture.

We are left to fill the gap utiising the Sumerian records which do not make a direct reference to the Ubaid Culture or Lizardmen but nevertheless refer to the role of Anunnaki Ancient Aliens in the creation of the Sumerian Civilization.

The mystery deepens when we consider that the Serpent was the symbol of EN.KI, the Chief Anunnaki God responsible for teaching mankind the Arts and Sciences necessary to bring forth Civilization and to whom the first Sumerian City, Eridu was dedicated.

In addition, the spread of the Serpent Cult to other early Ancient realms associated with the Anunnnaki in Meso-America, Egypt and the Indus Valley suggests that the possibility that the Lizardmen of the Ubaid may very well be the Anunnaki Ancient Aliens referred to in Sumerian Texts, the Quetzalcoatl tradition of Meso-America, Egypt’s Serpent Cult symbolised by Thoth or Ningishzida in Sumerian, and the Naga Serpents of the Indus Valley.

All these Serpent based Cults came to exist in areas or Regions denoted specifically as designated Anunnaki areas of control and influence in the Sumerian Texts.

Further speculation can also be found in the Reptilian Conspiracy, suggesting that these Serpent entities are actually the Reptilian entities that founded Civilization and remain in control of the Reigns of Power today from behind the Shadows.

The Reptilian perspective gets more interesting when one considers the information provided by African Traditional Healer/Shamaan Credo Mutwa in an interview with David Icke in which he confirms the arrival of Reptilian entities in Africa called the ‘Chitauri’ who also introduced language and farming to Ancient Africa…Its the featured Home Page Documentary, and I can only suggest that you check it out and draw your own conclusions.

It would be a mistake to treat the Sumerian Civilization as sudden due to its Historical traces and evolution dating back to the earlier Ubaid period Culture.

Nevertheless, since the Ubaid Civilization did not leave a record of the role played by the Ubaid Lizardmen Serpent-like Gods, we are left with the records of the Sumerian Civilization which state that their Civilization was bestowed by the Anunnaki Ancient Alien Gods.

In particular, a Serpent God who seeded Civilization, and also had the world’s first City dedicated to him. Furthermore, his Cult appears to have expressed itself in all parts of the World in which early Civilization can be traced.

To add to the mystery, we have confirmation of the Reptilian presence in Ancient Africa.

In the final analysis whilst the Sumerian Civilization had a clear Historical predecessor in the Ubaid Civilization, some questions relating to how the Civilization was seeded and guided remain unanswered…What role was played by these early Ubaid Lizardmen Serpent beings, and are these entities the Anunnaki Ancient Alien Extraterrestrials referred to in the Sumerian Texts?