Melanin is a chemical substance which possesses properties that we can objectively observe and draw conclusions about the truth about Melanin as a chemical and its relationship to Skin Colour.

Such an approach to Melanin reveals some interesting things.

What Is Melanin: The Compound

Chemically, melanin is composed of Carbon, Hydrogen, Oxygen and Nitrogen, with the word Melanin being taken from the Greek word Melas for ‘black’ or ‘dark’ which refers to the group of natural amino-acid pigment cells found in most living things.

These Melanin Cells belong to a special group of pigment cells called melanocytes. 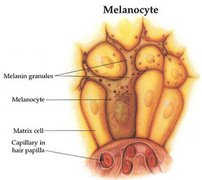 The three basic types of melanin are eumelanin, pheomelanin, and neuromelanin.

Eumelanin is the darkest, and is made up of two kinds of melanin, brown eumelanin and black eumelanin.

The Third and lightest form of melanin is Pheomelanin which can never go darker than maroon in colour.

The Brain and Central Nervous System also contain melanin in the form of Neuromelanin which is critical for optimal Brain and Nervous system functions.

Melanin In The Human Body

Melanin appears to be a critical and versatile part of the body’s chemistry necessary to sustain life itself, especially if its role in the Central Nervous System is considered.

In addition to its importance to Brain and nervous system functions like vision, melanocytes also play a role in determining Skin colour or pigmentation.

Eumelanin and Pheomelanin are the determinants of Skin colour or pigmentation.

The specific skin tone produced depends on the person’s DNA.

If the DNA produces Eumelanin, then a person will be between brown and black in Skin tone.

On the other hand, if the DNA produces Pheomelanin, the individual concerned will not be darker than maroon in Skin tone.

It therefore seems that Skin tone is determined not by the quantity of Melanin, but rather the type of Melanin a person’s DNA can produce.

Albinism results from the failure of melanin skin pigmentation cells to bind to the surface of the skin or epidermis.

Important to consider though is that Eumelanin or ‘dark’ Melanin contains a higher concentration of dark Carbon Atoms than Pheomelanin.

As a result of this higher Carbon concentration, the main advantage of possessing Eumelanin is in the absorption of the Sun’s UV Radiation and protection from UV skin damage.

There may possibly be other metabolic advantages that can be derived from this greater conductive capacity of the Sun’s radiation as a source of energy for Biological processes in the Human body.

This possibility can be understood in terms of pure Physics since the more efficient the body is as a receptor of the Sun’s UV rays, the more energy it can harvest to power the body and mind.

The Source Of Melanin

The Carbon, Hydrogen, Nitrogen and Oxygen that make up Melanin like other elements on Earth came from exploded Stars dating all the way to the Big Bang or beginning of the Universe.

Since elements on Earth have been traced to exploding Stars, Melanin as a compound made up of these basic elements is probably a product of the Universe.

Certain Space phenomenon like Black Holes, Dark matter and the darkness of Space itself have also been attributed to a possible high Carbon concentration in Space.

The Advantages Of Possessing Melanin

According to Professor Kaba Kamene in Spirituality Before Religions, in order to understand the true importance of Melanin, it must be appreciated that Melanin is composed primarily of Carbon which is the building block of most matter and life in the Universe.

For this reason, the Carbon in Melanin enhances the body’s Physical, Spiritual and Mental processes in the same way Chlorophyll enhances biomechanical processes in Plants.

As a result, the possession of higher amounts of Melanin in human beings may lead to greater efficiency of the Body’s Biochemical processes resulting in improved awareness and abilitues to achieve Higher Spiritual Consciousness.

Melanin itself is a neutral chemical substance.

The identity politics that have grown and strengthened around it can probably be best understood in Historical terms in an effort to address the negative psychological effects of Slavery and Colonialism rather than in Scientific terms.

Nevertheless, there seems to be a developing field exploring the actual Biological, Psychological and Spiritual advantages that can be derived when the Human body posseses higher levels of Eumelanin, and can therefore absorb the Sun’s UV energy more efficiently for the purposes of drving the body’s physical, spiritual and mental faculties.

Its possible that these advantages may be explored in Anthropology to account for such things as differences in Cultural aspects like Art and Religion.

This body of knowledge may also have been part of the Metu Neter Ancient Mystery Knowledge of Ancient Egypt.

In spite of all the above, one thing seems reasonably clear and that is Melanin is part of the Stardust that formed the Universe, the Earth and all Human beings.