The builders of the City of Tiahuanaco may be Anunnaki Ancient Astronaut Aliens or a Lost Civilization.

Tiahuanaco is regarded as the oldest of the Ancient Cities of South America, dating back to about to about 600 AD. However, for different reasons Ancient Astronaut Theorist Zechariah Sitchin and alternative researchers like Graham Hancock claim that Tiahuanaco is much older, dating back almost 15 000 years.

The main structures at Tiahaunaco are the following:

i) The Akapana stepped Pyramid;

ii) The Kalasaya enclosure built with rectangular stone blocks and tall columns, and is the location of the Gateway of the Sun, one of Tiahuanaco’s outstanding structures with mysterious decorations of winged figures;

Both the Ancient Astronaut Theory and Graham Hancock point to the Astronomical alignment of the Kalasasaya Complex at Tiahuanaco as a clue to Tiahuanaco’s age.

The agreed reason for the establishment of Tiahuanaco on the shores of Lake Titicaca is the large amount of Tin Ore deposits found in the area which would be extensively used in the manufacture of Bronze.

The Ancient Astronaut Theory claims that based on these apparent coincidences, the Sumerian record can assist in identifying Viracocha and the builders of Tiahuanaco. 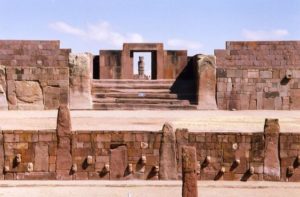 In particular, the need to replace dwindling Tin supplies, and the extension of Anunnaki Territory by Enlil after the first division of Earth’s realms between Enki and Enlil following the initial Anunnaki operations that had begun at Eridu in the wake of the Anunnaki Ancient Astronauts’ immediate arrival on Earth.

Since the division of the Earth between Anunnaki Gods Enki and Enlil by the Anunnaki Council after the initial settlement at Eridu was established, Anunnaki Ancient Astrinaut activities had gone ahead in earnest with gold mining activities in Africa resulting in the Igigi Rebellion and the creation of the Primitive Worker by Enki to ease the burden of the Anunnaki Alien Gods.

The Ancient Astronaut Hypothesis claims that after the Tin needed in Mesopotamia was discovered on the shores of Lake Titicaca, the Anunnaki resolved to further develop the surrounding area and built Tiahuanaco as a new City State.

At Tiahuanaco, the God Viracocha was portrayed as a Storm God which was consistent with the Anunnaki Ancient Astronaut God Enlil’s characterization in the Sumerian Pantheon.

As such, its possible that the Viracocha of Ancient Meso-American Codex and memory is in-fact the Sumerian Anunnaki Ancient Astronaut Alien God Enlil, and also that Tiahuanaco was built as an extension of the leading Enlilite Sumerian City State of Nippur as part of the ongoing Ancient Astronaut Earth Colonization project.

The reasons for Tiahuanaco’s decline are not excatly known, but at its peak, the Tiahuanaco Civilization influenced and controlled what is now eastern and southern Bolivia, parts of Argentina, Chile, and Peru.

If the Ancient Astronaut Hypothesis and Graham Hancock are correct about Tiahuanaco’s age, then the Timelines would suggest that it was destroyed in the Great Deluge.

0 replies on “The Anunnaki Alien Builders Of Tiahuanaco”