“Comrades, there is no true social revolution without the liberation of women. May my eyes never see and my feet never take me to a society where half the people are held in silence. I hear the roar of women’s silence. I sense the rumble of their storm and feel the fury of their revolt.”
Thomas Sankara, Women’s Liberation and the African Freedom Struggle

Thomas Sankara was a revoluntary and true humanist who left a mark beyond his country.

In his short near four-year-term as the president of Burkina Faso which ended when he was killed  in a military coup in October 1987.  Sankara revolutionised politics in post-colonial Africa. He sought to change the lives of Burkinabè people, particularly women, the poor and disenfranchised. Of his achievements, Women’s empancipation came as second highest priority during his term in office.

Sankara criticised Burkinabe men, including some of his fellow revolutionaries who hampered the advancement of women in their own families and within the country. Transformation would be incomplete, Sankara is quoted saying, if “the new kind of woman must live with the old kind of man”  He was a leader for the people and a proponent of Pan-Africanism. He challenged status quo and conventional ways of doing things.

Thomas Sankara , the first son and third child in a family of 10 children was born on the 21st of December 1949 in a small town called Yako in central Upper Volta (Haute-Volta as the territory was called from 1896 to 1960). He was born to Joseph and Marguerite Sankara. Thomas  initially bore a different  name Thomas Isidore Noël Ouédraogo.  Ouédraogo is one of the most common family names among the Mossi people. Sankara’s father who is Silmi-Mossi assumed the name Ouédraogo when he joined the French army in the World War II at the request of the Mossi chief of Téma, whom his family was allied. Thomas was in his teens when his father changed the family name back to Sankara.

Sankara grew up in relative privilege being the son of one of the few African functionaries then employed by the colonial state. However, as he grew Sankara would become aware of the plight and adverse living conditions of his friends  during playtime. He would also become sensitised to the living conditions of the wider world around him.

At eleven years old, a few days just before Upper Volta obtained its independence from France, Sankara and some of his friends organised a mock ceremony to lower the French flag and raise the colours of the new nation. This resulted in a fight between the European boys and African boys which though Sankara was not part of the school director demanded that his father punish him with a beating, his father refused.

Sankara excelled in Math and French and participated in church. This impressed the priests who encouraged Thomas to attend seminary school once he finished primary school. When Sankara later changed his mind and his father told the priests that Thomas will not be joining a seminary, they responded by saying the father had not prayed hard enough for his son. 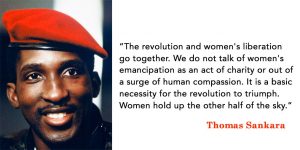 Sankara continued to observe the political turmoil in his country. When a military academy was established by Lieutenant-Colonel Sangoulé Lamizana, Sankara was finishing his secondary school. He joined shortly after and threw himself into service. Military academy would come with a full scholarship for Sankara who  was also passionate about music, he played the guitar.

In 1970 at the age of 20 Thomas Sankara was sent for official training in Madagascar. While he was in Madagascar, he witnessed a popular uprising of students and workers that succeeded in toppling Madagascar’s government. It was also in Madagascar where he first read the works of Karl Marx and Vladimir Lenin, and this profoundly influenced his political views for the rest of his life.

Sankara returned to Upper Volta 1972, he rose through the ranks becoming a Lieutenant in 1976. He married Mariam Serme in Ouagadougou in 1979 , they had two children together.

In 1983 Sankara finally accepted a position as Prime Minister next to  President Jean-Baptiste Philippe Ouédraogo. When Sankara took his oath of service, in his speech ‘’the people” meant “peasants, workers, artisans, artists, students, and democratic organisations that defended the interests of the popular masses”

During his service as president, Sankara would change the colonial name of his country from Upper Volta to Burkina Faso which means “land of the upright men”. Thomas, a young black president in one of the poorest countries in Africa directly criticised the policies of some of the world’s most powerful nations as witnessed by President François Marie Adrien Maurice Mitterrand  in his 1986 visit to Ouagadougou.

Sankara’s government would accomplish more than any  African leader is yet to achieve to date in such a short time.  Some of the radical changes Sankara is known  for include but are not limited to the following:

From the outset , Burkinabè leadership under Sankara emphasised the emancipation of women as one of its central goals. In Sankara’s 1983 orientation speech, women’s advancement featured second in a list of national priorities.

Though fraught with its own challenges and resistance including resistance from women themselves, Sankara was not deterred. He would work towards the upliftment of the Burkinabè women in a patriachial society that exploited women’s rights. He was one of the very first African leaders to appoint women to high government positions and to recruit them actively for the military. Female genital mutilation was outlawed so was forced marriages and polygamy.

Specific measures for women were built into many social and economic programs. These included literacy classes targeted towards women, establishment of primary health care units in each village as well as support for women’s cooperatives and market associations.

Many women appreciated finally seeing someone on their own gender in at least a few positions of authority. Whilst a genuince shift in power would take longer these gestures in action influenced a previously impossible narrative in post-colonial Africa. Today whilst there is still much work to be done milestones have been achieved towards women’s rights, equality and equity in all spheres of life. It is leaders like Sankara who were ahead of their times that have inspired some of these changes in regard to women’s emancipation within societies today.

Improving the ways of governing in post-colonial Africa has never been easy.

Despite of all the good efforts and progressive reforms during Sankara’s time in office there have been reports of human rights abuses including cases of torture detention and other violations. Sankara’s revolutionary zeal led him to allegedly target certain elements of the society as enemies and they were persecuted. By 1987 Sankara’s government was also in trouble. In his attempts to root out corruption Sankara set up public tribunals that tried nearly 1000 government officials and civil servants for the misuse or theft of public funds. Many lost their jobs, plenty without just cause and this angered many of the country’s elite.  Sankara’s policies also antagonised France.

It is suspected that his right-hand man president Blaise Compaoré, was plotting a coup to oust Sankara. Compaoré had lost faith in the revolution. On the 15th of October 1987 Thomas Sankara was killed by an armed group along with 12 other officials in a coup d’état organised by Blaise Compaoré.  Sankara’s body was dismembered, and he was quickly buried while his widow Mariam and their two children fled the country. Sankara was 37 years old at the time of his death.

Blaise Compaoré, would assume the role of president. He immediately reversed the nationalisation of the country’s resources, overturned nearly all Sankara’s policies and re-joined the international monetary fund as well as the world bank. Compaoré would remain in power for 27 years until he was overthrown by the popular protest in 2014.

Over 30 years has passed since his death and yet the legacy of Thomas Sankara still reverberates in Burkina Faso and across the continent of Africa and the world.  The author of Sankara’s biography Ernest Harsch once said in an interview that Sankara was ahead of his time as an African leader in regard to the emancipation of women.

Sankara promoted women’s rights  putting it on the nation’s agenda as high priority, he appointed women into high cabinet positions at a time when it was unusual in post-colonial African politics. Sankara was also determined to improve the livelihoods of his people in an era where most African leaders are in power largely for self-aggrandizement, filling their own pockets and that of their immediate family members or favouring a particular group or set of people at the expense and suffering of the masses.

0 replies on “Thomas Sankara & Women’s Emancipation: A Man Ahead Of His Time”