Monopoly has a new ‘Money Grab’ Chance Card that may seem harmless but in reality, despite making it irritating to stand in the middle of a game, the introduction of this new Monopoly Chance Card may be a sign that our Civilization is normalising a late stage Capitalist ‘Bread and Circuses’ Dystopia in the face of inflation caused by a declining Fiat Currency which has magnified our present Economic and Cultural decline. 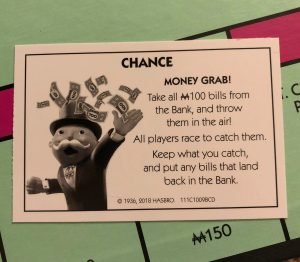 I’ve been playing Monopoly since I was 8 years Old,  and I recently bought a new Monopoly Board for Christmas thinking Monopoly will always be one of those hallowed Childhood memories that would not be tainted by the Capitalist Dystopia of our Post-Covid world.

However,  this is precisely what happened when a random night of Monopoly with my Wife turned into yet another stark reminder of our Civilization’s decline.

The fact that our current Civilization is in Economic and Cultural decline is well documented and I wont labour the point here, but the fact that Monopoly, a Strategy game about Capitalism now feels the need to cater to a base ‘make it rain’ instinct says a lot about the game of Capitalism in its current form today.

Historians have long observed that the decline of Civilizations like Ancient Rome was characterised by the same self-destructive pleasure seeking ‘bread and circuses’ Narcissism that appears to be infiltrating Society today.

The new version of Monopoly appears to normalise and cater to this ‘easy money’ pleasure seeking Narcissim that is becoming the new normal.

On another level, the new Chance ‘Money Grab’ Card in Monopoly also feeds into the late stage Capitalist Dystopia portrayed in TV Shows like Squid Game in which Chance random ‘Wins’ are the only avenues available to escape the Dystopian Rat Race of a Capitalist Society.

It therefore comes as no surprise that Hasbro, the Games Company that owns Monopoly is planning to release a full on ‘Cash Grab’ Game complete with a Paper Money Blaster for Players to ‘Blast and Grab’.

The fact that the very notion of a ‘cash grab’ has made its way into the Game of Monopoly can be viewed as an acknowledgement that in reality we live in a world in which our current Monetary System is a Fraud in which Money has no intrinsic value.

This is really the difference between the old version and new version of Monopoly, the implicit acknowledgement that the Money the Players are fighting to accumulate in the Game is not real after all, both on the Monopoly Board and now in real life as well.

Such a development in a Post-Covid World is hardly surprising in light of the excessive money printing carried out by Countries like the United States in order to fund ‘Stimulus Packages’ and to provide Social assistance to Citizens.

This has led to increased inflation thereby undermining the value of  Fiat Currency and created a Bubble Stock Market sustained by excessive Money Printing by The Federal Reserve and other Central Banks around the World.

In addition, the increased money printing has worsened the Cantillon Effect which has seen greater wealth accumulation by the Top 1% at the expense of everyone else because the Top 1%  have access to money before the majority via the Central Banks which enable the Top 1% to use Fiat Currency to purchase Real Assets with Paper Money before the Money has been devalued by inflation once it reaches most people in the broader Economic system.

In our present Economic era, the most extreme examples of this phenomenon in which Fiat Paper Currency is abused by a Ruling Class with privileged access to the Central Bank Money Printer have been provided by Zimbabwe and perhaps Venezuela.

Thus the new Monopoly ‘Cash Grab’ concept is a stark reminder of the true state of the Dystopian Capitalism of our era where the Fiat Money we struggle to accumulate in the Rat Race of Life has no intrinsic value and one of the ways out of this meaningless Dystopian Rat Race is some random fortuitious event that will ‘make it rain’ and solve all our problems.

Perhaps a new version of Monopoly should be created where the Players accumulate Bitcoin instead of Paper Money.