The Longest March a is non-fiction book by Fred Khumalo the much acclaimed author and journalist. Published in 2019, The Longest March  is inspired by true historical event in South Africa. In 1899 just before the second Anglo-Boer war, led by Mr J.J. Marwick, representative of the Natal Native Affairs Department and six Republican policemen 7000 Zulu men and women walked about 400 kilometres in 10 day on foot from Johannesburg towards home in Natal and Zululand.  Though these miners could afford to pay the required train fares, they were not given passage.

Phillipa and Nduku short for Ndukuzempi are lovers engaged to be married. Phillipa is a coloured woman born of a mixed-race father (who could pass as White) and a Black Motswana woman. Phillipa falls in love with Nduku a black Zulu man, much to the distaste of Phillipa’s mother who is black. She preferred Phillipa to associate herself with whiteness (which Phillipa had the privileges of adopting into if she chose) and marry a white man. Unknown to Phillipa she is caught in a love triangle that involves herself, Nduku and Xhawulengweni, Nduku’s lover.

Phillipa and Nduku’s relationships is fraught with challenges, it being an inter-racial relationship which was highly frowned upon in their time.Complicating matters along the journey Phillipa discovers she is pregnant, carries Nduku’s child. Xhawulegweni hates Phillipa with passion as he believes she stole Nduku from him and has contributed to Nduku’s weakness

“He drank the poison of fear and meekness from the likes of you. From White people”. The Longest March, pg. 127.

Xhawulegweni who belongs to a notorious gang called Umkhosi WeZintaba which claimed to protect the miners against white oppressors yet stealing monies from the very people it claimed to protect plots to eliminate Phillipa from the love triangle by having her killed. Complications arise and the carefully planned assassination of Phillipa implodes in an unexpected manner.

Through his characters, Fred Khumalo takes us through a treacherous journey of 400 kilometres in rugged terrains on foot. The Longest March is about giving faces and humanising the lived experiences of the thousands of Black miners forced  out of mine properties, risking everything including real possibilities of being arrested for vagrancy, being shot at by Boer commandos, or becoming lotters and rioters to face a bleak journey back to Natal their homelands. 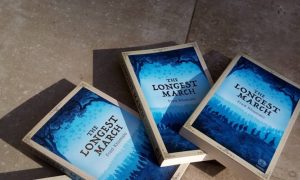 A very long march into exploring our essence

Nduku, Phillipa and Xhawulegweni are haunted by ghosts of their past. Fred Khumalo brings the reader to empathise with the complexities of his characters. They’re searching for their place in world that is not ready to accept them.

They expore tough often avoided question of human-being. Who are they? What are they? Where is Home? Who is home? What do they stand for? The world they find themselves in would rather prefer to box them within contexts and labels that make society comfortable with its own discomfort.

Nduku and Xhawulengweni have a homosexual relation. Theirs is born from genuine love and attraction for each other and not out of the loneliness of the life of miners. Far from home and separated from their wives and children, the goldfield mines take on a life of its on, producing Omakotshana. These are boy-brides that dressed as women and provided sexual needs among other favours to older men in exchange for money and spoils

Fred Khumalo’s story-telling writes into history coloured (mixed-raced) people of South Africa. He empathises with their plight on belonging. Historically coloured people of South Africa were viewed as ‘better’ than black people but less than White people. This often created struggles in occupying spaces without having to chose between identifying as black or white.

In his book,our personal favourite Dancing The death drill also inspired by true historical events of the sinking of the SS Mendi, Fred’s main protagonist is a mixed race man, Pisto Motaung. Pitso in-spite of choosing to identify as a black man faces a myriad of challenges. Through Pitso, Fred gives a face to the complex nature of being a coloured person in country like South Africa which has often been divided as either Black or White.

The Longest March 1899 is a hidden lesson in history

Fred Khumalo in his book writes back history for the then disempowered. Inspired by his research in a book 1899: The Long March Home: A little known incident in the Anglo-Boer War by Elsabe Brink, Fred got into his car and traced back the journey of 7000 courageous men and women writing them back into history.

The Longest March is a lesson in history at a particular important time. From the 1879 defeat of the Zulu nation by the British, led by King Cetshwayo to the fragmentation of the Zulu nation, tribalism, the Zulu march to home and the second Anglo-Boer war.

Fred also critics in his book the problems with both religious belief systems like Christianity as well as the traditional African belief systems, focusing mainly on the Zulu tradition and culture.

These events have influenced and modelled the South Africa we know today.

The Longest March is another book written by Fred Khumalo that should be taught in schools, next to Dancing the Death Drill and Seven Steps to Heaven by the same author

Rise Of Civilization: The Akkadian Empire