Following Space X’s recent successful test flight to the International Space Station, the possibilities and hopes for Colonisation of not only Mars but Space in general are at an all time high.

The euphoria is perfectly understandable and natural given the immense progress that’s been made, and the amount of work it has taken to get us there. 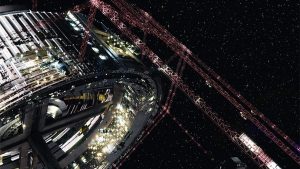 Nevertheless, lost in the euphoria is a conversation on the possibility of a hidden dark side to our ambitions in Space.

In short, will human settlement in Space result in the Utopian society envisioned in the imagery depicting our Colonisation of Mars or will the social injustice, inequality and politics that have plagued life on Earth also be replicated on future Space Colonies?

Whilst certain Films like Ridley Scott’s Alien Franchise have excelled at exploring the theme of Space Colonisation to shed light on the future roles of big business, artificial intelligence and government in Space, the Alien Monsters In Space motif it skillfully employed can become cliche.

After watching the opening sequence some time ago, I mistakenly dismissed The Expanse as another Monsters in Space cliche I was seriously mistaken.

Based on a book series by Daniel Abraham and Ty Franck under the pen name James S. A. Corey, The Expanse is set in the 23rd Century after Humanity has colonised and set up settlements on Mars and the Moon as critical asteroid mining operations for minerals and most importantly, water are carried out on the hard labour and backs of the Belter underclass.

The United Nations controls Earth and the Moon, whilst Mars has established itself as an independent military colony.

In The Expanse, we get a glimpse of the politics and conflicts that may play out in Space should Mars secede from Earth, and how the social oppression familiar on Earth may be mirrored in Space in the ensuing conflict involving Earth, Mars and the Belters, as each group begins to assert its own separate interests in Space. 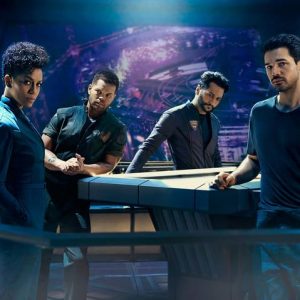 Taking some visual cues from the most recent Alien Films, The Expanse manages to render its own unique vision of Space technology and exploration, and is definitely not another cliche Space TV Show.

Whilst our faith in the Human endeavour to conquer Space has been characterised as a form of new Space Religion, in my view, blind optimism may be necessary at this stage in order for us to overcome the massive obstacles required to accomplish the task of Colonising Space.

In the midst of the euphoria, however, The Expanse is a necessary cautionary tale that encourages us to imagine beyond the initial settlement and Colonisation of Space.

We are made to consider the possibility that ultimately the same issues and questions of Power, Politics and Social injustice that we have failed to resolve on Earth will come to haunt us even in Space.

In The Expanse, the message is articulated through a deft balance of plot, characters, science and special effects to deliver a compelling critique of a Utopian vision of the Human Space Project.

On another level, The Expanse can also be treated as a call to resolve the issues that have plagued us on Earth before we transport them perhaps unwittingly into Space.