The Egyptian African story of creation was developed by competing Theological Priestly Schools, and two of the most prominent African Egyptian Creation Stories were called the Ennead of Heliopolis and the Memphite Theology recorded on the Shabaka Stone by the 25th Dynasty of the New Kingdom.

African Egyptian creation mythology is best appreciated as a Scientific Metaphoric story explaining the Origins of Life in the Universe and the Natural Laws that govern it.

THE HELIOPOLITAN AFRICAN MYTHOLOGY OF CREATION

The African Egyptian Heliopolitan story of Creation was developed at Heliopolis (On – Innu – Innu Mehret) and is based on the manifestation of the Deity RA as the Principal Expression of the Supreme Being at the moment of creation.

The Heliopolitan African creation story of Egypt states that initially the Universe was a vast inactive ocean of watery nothingness called “Nun” in which were contained all the Laws of the Universe and the Seeds of life which were still in an inactive dormant state.

The Supreme Being of the Egyptian African story of creation then begot itself out of the Nun and rose to a mount of dry land upon which the Neteru Deity “RA” manifested through an act of Self-Creation by exercising Conscious Will on the Nun to bring it into an active state which resulted in RA’s emanation as the Principal expression of the Supreme Being out of the primordial Nun once it was activated by the Will of the Supreme Being.

Since RA self-emanated from the exercise of will on active Nun (Energy) by the Unseen Supreme Being according to the Egyptian African Creation myth, the Egyptians portrayed RA using a Symbol that combined a Falcon (Will) with a Red Solar Disc (Active Primordial Energy or Nun) and a Snake coiled around the Solar Disc representing the Intelligent Exercise of Will over Pimordial Matter by the Unseen Supreme Being which had led to the First Emanation of the Deity RA. 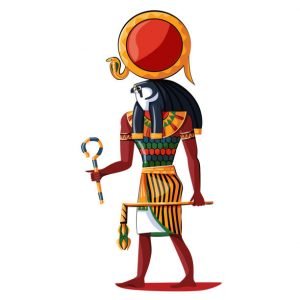 In this way, sky and earth as well as the Natural Laws of Modality which oscillate between Hot and Cold that apply in the space between the Sky and the Earth came to exist.

From Nut and Geb, the Deities: Osiris, Isis, Seth and Nephthis were born.

THE MEMPHITE AFRICAN MYTHOLOGY OF CREATION

The other important and highly advanced Egyptian African creation story is from the Cult at Memphis.

In this version of the Egyptian African creation story which is inscribed on a Stone Slab dating back to King Shabaka of Cush in Nubia (25th dynasty – 6th century BC), the First Emanation of a Deity from the Unseen Supreme Being from the Primordial Nun was a Primordial Hill called Ptah followed by Atum.

However, unlike RA, in the Heliopolitan Egyptian creation story, in Memphite Theology, Ptah and Atum do not emanate from the exercise of Intelligent Will over Energy, instead they emanate from Thoughts in the Supreme Being’s mind which are expressed as Utterances or Sound (The Greek Logos).

Memphite creation mythology goes on the state that from the remaining Primeval Nun, the following Pairs of Principles that govern the Natural world emerged as part of Atum:

The Memphite Egyptian creation story then goes on to name the remainder of the 8 Principles that govern Natural Order.

These Eight Deities are created when Atum (Atom) divides itself into other Deities made up of a total of 4 Pairs.

who are said to have given birth to four other Gods:

(v) Osiris (the God of omnipotence and omniscience)

(vii) Seth (the opposite of good)

In the Memphite African Theology, Ptah is pure Consciousness as the Principal Emanation of the Unseen Supreme Being.

The Egyptian creation story of the Memphite Cult of Ptah was the official State Religion of Egypt from the period of the Ancient Egypt’s First Dynasty.

However, Ptah was subsequently replaced by RA as the head of the Egyptian Ennead Pantheon when the Egyptians created a more accurate Calendar by tracking the movements of the Sun which gave them the ability to take into account the Quarter missing day in each year once every 4 years, allowing the Ancient Egyptian Africans to predict the Flooding of the Nile more accurately.

The fact that the Sun was the key to predicting the Flooding of the Nile meant that the Temples of RA were elevated which led to a decline in the status of Ptah.

However, by the 4th-6th Dynasties, the Osirian Revolution, the world’s first Revolution which was carried out by Egyptian Commoners against the Egyptian Old Kingdom Monarchy led to a change in the Egyptian creation story which saw an elevation of the status of Osiris as Hero and Protector of the vulnerable Commoners to become the Principal Emanation of the Unseen Supreme Being, and thereby replacing RA at the head of the Egyptian African Pantheon.

In this way Ausar (Osiris) came to represent Pure Consciousness as the First Emanation of the Supreme Being. 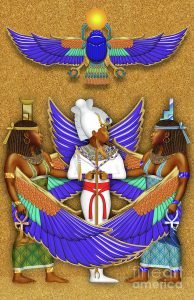 The Egyptian African Creation story is ultimately an attempt to explain the origins of Life and the Universe in accordance with the Natural Laws that govern it.

As such, Egyptian African Creation mythology should be interpreted as a Metaphor for the Manifestation of our Universe and how the Natural Laws that govern it came to exist.

Its clear that the African Egyptian creation story is rich in Scientific and Philosophical ideas which continue to influence our world today and which had a significant impact on Ancient Greece.

Furthermore, some of the concepts of the Egyptian African creation story such as the Atom (Atum) as the basic building block of matter were only discovered recently by modern Science even though they were already understood in Ancient Egypt by at least 3 000 BC.

0 replies on “The Egyptian African Story Of Creation”