Before Dr Obenga’s Thesis that Egyptian writing was the oldest in the world based on the Egyptian Medu Neter Hieroglyphic Writing, the mystery of the origins of writing had seen various conclusions drawn, the most prominent of which is that the origins of world Writing can be traced to Ancient Sumer in Mesopotamia where the Cuneiform Script was developed as suggested by Scholars like John D. Ray, a British Scholar who concluded that writing came to Egypt from Sumer.

However, despite these differing points of view, Ancient Historical records demonstrating that the Egyptian Hieroglyphic Writing is the oldest in the world have always existed dating back as far as the Phoenicians and Ancient Greece such as in Plato’s Phaedrus dialogue where Socrates attests to the fact that the ta grammata, or, “the letters”, were transmitted to the Greeks by the Ancient Ethiopians being an inheritance given to the Ancient Africans of Egypt by the Egyptian Neter Thoth (Tehuti).

Strong support for the argument that the Medu Neter Egyptian Hieroglyphic Writing is the oldest in the world dating to 3 400 BC when the Pre-Dynastic Nubians of Egypt developed the  Medu (Metu) Neter Hieroglyphic script is based on the excavations led by Dr. Giinter Dreyer, Director of the German Archaeological Institute in Cairo in 1998 which discovered the most ancient written texts in world history at Abydos, in Upper (Southern) Egypt.

This discovery in the form of more than 200 Tablets of written Medu Neter Hieroglyphs that were found at Abydos, provides convincing evidence that the Ancient Egyptian Medu Neter Writing system developed by the Africans of Pre-Dynastic Egypt is the oldest in the world.

The Ivory Tablets found at Abydos which form the basis of Dr Obenga’s Thesis that the origins of the oldest writing system in the world can be traced to Egyptian Hieroglyphic writing circa 3 400 BC in the period of Africa’s  Pre-Dynastic Nubian Egypt  are scripts consisting of written signs with a specific sound or Phonetic value, and radiocarbon dating has established that they are much older than Sumerian Cuneiform Script.

Based on the findings at Abydos which suggest that the origins Of Egyptian Hieroglyphic Writing are in Africa, Dr Obenga contends that the following is the actual Chronological order in which writing across the world developed: 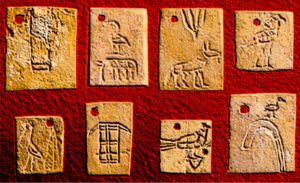 According to Historian Dr Theophile Obenga, Egyptian Hieroglyphic writing is the oldest in the world and it originated in Pre-Colonial Africa circa 3 400 BC in the era of  Pre-Dynastic Nubian Egypt because:

The Sumerian Cuneiform script did not spread beyond Mesopotamia and ultimately, it makes sense that writing originated in Africa because Africa is also the cradle of mankind.

0 replies on “Egyptian Medu Neter Hieroglyphic Writing: The Oldest In The World?”