The Anunnaki Alien Gods Of Teotihuacan

Teotihuacan was established either by an unknown Lost Civilization or the Anunnaki Ancient Astronaut Alien Gods of Mesopotamia between 3000-4000 BC although the largest structures of the City weren’t completed until 300AD.

This is based on Graham Hancock’s Lost Civilization hypothesis and Zechariah Sitchin’s Ancient Astronaut Hypothesis argument that Teotihuacan belongs to the lost Realms of the Anunnaki Alien Gods.

Anunnaki Alien Gods In The History Of Teotihuacan

According to Ancient Aztec Codices and Oral Tradition, Teotihuacan was established by a fairk skinned God called Quetzalcoatl who brought with him the knowledge of Civilization and Gold mining.

The Pyramids of the Moon, Sun and Temple Of Quetzalcoatl which were modelled on the Giza Pyramids.

In addition, Quetzalcoatl’s arrival appears to and also coincide with the arrival of the Olmecs in Ancient Meso-America.

Both the Ancient Astronaut Hypothesis and Graham Hancock agree on the Teotihuacan connection to Ancient Egypt.

Teotihuacan’s connection to Ancient Egypt would not only explain the Pyramids at Teotihuacan but also the presence of the African Olmecs in the region.

On this score, Ancient Astronaut Theorists venture further than Graham Hancock by relying on the Sumerian record to fill in the gaps on the identity of Quetzalcoatl and the Architects of the Gold-mining Civilization at Teotihuacan.

In Lost Realms, Sitchin refers to the Sumerian records account of the Tower of Babel incident which suggest that after the Anunnaki Ancient Astronaut God Marduk’s defeat at Babel, he took over the realm of Egypt and displaced Anunnaki God Thoth or Ningshiidza as Lord of Egypt.

In response, the Anunnaki God Thoth migrated to the Meso-American region where he settled at Teotihuacan. 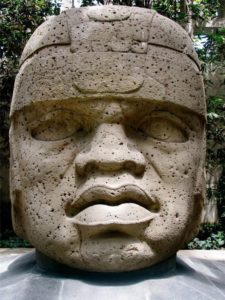 If this interpretation is correct and the Anunnaki God Thoth did come from Egypt and settle at Teotihuacan, then the presence of the Olmecs can also be explained as part of the African contingent that had accompanied the Alien God Thoth from Egypt.

The Historic role of the Nubian Kushites in Ancient Egypt is already acknowledged even in mainstream History, and its therefore possible that Thoth may have been accompanied and assisted by African Nubians in the establishment of Teotihuacan from 3000 BC.

The reasons for Teotihuacan’s decline and eventual collapse are unknown, but by 750AD the City had been abandoned.

However, if the Ancient Aztec codices are to be believed, then the City was destroyed by a great Deluge during the era of the Fourth Sun.

The decline of Teotihuacan would pave the way for the rise of the next great Empire of Mesoamerica, the Aztecs.

Rise Of The Songhai Empire