The Aztecs and the Capital they built at Tenochtitlan is a remarkable example of Technological and Cultural development.

At present, the accepted mainstream historical account is that Tenochtitilan was built by the Aztecs but in Lost Realms, Sitchin’s Ancient Astronaut Hypothesis suggests a connection to the Bible which may link Tenochtitlan to Enoch and the Anunnaki Ancient Aliens.

Aztec History has been uncovered through Archaeological excavations and written Codices such as the Codex Boturini compiled by the Aztec themselves and from oral traditions recorded by Catholic Priests after the Aztec conquest.

In this series of the Lost Realms of Meso-America, we will start with exploring both the accepted mainstream and proposed alternative Ancient Astronaut History of the City of Tenochtitlan.

Origins Of The Aztec Nation

The Aztec were intially part of the groups of peoplessettled at Teotihuacan, and their homeland was called Aztlan or ‘White Land’.

The Aztec were a lesser Tribe paying tribute at the time until they decided to secede from the declining Kingdom at Teotihuacan.

According to Aztec Mythology, their leader Tenoch received a vision directing the Aztec to leave Teotihuacan in order to find new territory for the establishment of their own Kingdom.

The legend goes that the Aztec were given a specific sign which would mark the place of the new Kingdom.

The sign would be an Eagle perched on a Cactus.

The Aztec left the Teotihuacan  and after wandering in the wilderness they came to a deserted Marsh where they saw an Eagle perched on a Cactus on the border of Lake Texcoco.

The Aztec immediately began settling on the Marshland and started the process of claiming the wild uninhabitable Marshes for the purposes of building what would become the venerated City of Tenochtitlan. 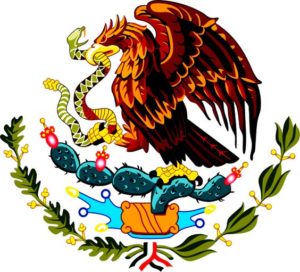 The Lost Realm Of Cain

In The Lost Realms, Zechariah Sitchin suggests that if considered more closely using the Ancient Astronaut Hypothesis, the origin story of the Aztec can be traced to Ancient Sumer.

More particularly, to the lost generation of Cain referred to in Genesis of the Hebrew Bible.

According to Genesis, Cain was banished from the presence of the Lord and sent to dwell in the land of Nod, East of Eden.

We are also further told that Cane and his Wife conceived and bore a Son called Enoch, and that Cain built a City, and called the City by the name of his Son Enoch.

The Aztec origin story of wandering in the wilderness until they found a promised location to build a City is similar to the Exodus story in the Hebrew Bible and the myth of Etana in the Sumerian Texts.

Things get even more interesting if one considers that the name of the Aztec City Tenochtitlan actually contains the word “Enoch”.

Furthermore, the Aztec Calendar suggests that the era of the Aztec was that of the Fifth Sun following a previous Fourth Sun of the ‘Black Headed Peoples’ that had been destroyed by a great deluge.

This is quite intriguing since the Sumerians referred to themselves as the ‘Black Headed Peoples’.

In addition, the Aztec creation myths bore a close resemblance to the Sumerian creation story in which man was fashioned out of Clay mixed with the Blood of a God.

The role played by the Sumerian Male and Female dieties Enki and Ninti is mirrored in the Aztec myth which also depicts the creation of man by the joint effort of a Male and Female deity by mixing Clay with the blood of a God.

Once all these similarities are taken into account, there is also the further possibility the Sumerian connection may potentially resolve the enigma of the ‘mark of Cain’.

In this respect, the mark of Cain may be the lack of facial hair, a genetic trait possessed by the Ameri-Indians of Meso-America as the descendants of Cain.

When all these correlations are drawn together, Ancient Astronaut Theorists contend that they provide a basis for connecting Tenochtitlan to the Alien Anunnaki Gods Of Mesopotamia.

Decline Of the Aztec Empire

At its apex, Tenochtitlan was occupied by more than 140, 000 people, making it the most densely populated city amongst the Civilizations of Mesoamerica.

In 1519, a large Spanish expedition under the command of Hernan Cortez was dispatched into Aztec territorry.

The Spanish Conquistadors entered Tenochtitlan in November 1519, and encountered a faloursishing Aztec Empire under the leadership of Montezuma II.

Initially mistaking Cortez for Quetzalcoatl, the Aztec God of the Fourth Sun who was expected to return according Aztec Prophecy, Montezuma welcomed Cortez and his expedition.

This fatal mistake would eventually lead to Montezuma’s kidnapping and death followed by the looting and pillaging of the Aztec Empire for Gold by the Spanish.

In addition, smallpox, mumps and measles devastated the Aztecs, and when a final attack on Tenochtitlan was launched in 1521, the Aztec Empire was effectively ended. 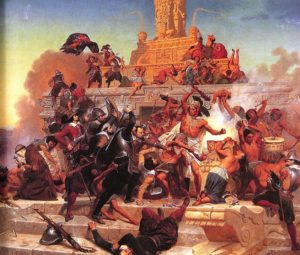 In the final analysis, the achievements and high Culture of the Aztecs remain impressive.

The destruction of the Aztec Empire was possible in part because the Aztec believed Cortez to be one of the Olden Gods of Meso-America who had returned according to Ancient Prophecy.

Its quite possible that the dieties of Aztec Religion and the founders of the Aztec Civilization were in-fact the Gods and Demi-Gods of Sumer continuing the saga that had begun with the commencement of Civilization in Sumer around 3500 BC, by expanding their influence and culture to Meso-America.

In particular, the Biblical Cain may have brought with him the knowledge and arts of Civilization from Ancient Sumer and built the City Of Tenochtitlan.

Its perhaps for this reason that certain features of the Sumerian civilization like Sumerian mythology, stepped Pyramids and the Astronomical alignments of structures became part of Aztec Civilization.

The alternative interpretation of Aztec History from the Ancient Astronaut theory that links Tenochtitlan to Sumeria and the story of Cain in the Genesis is presently not accepted by mainstream history.

In addition, there are also recent arguments suggesting an early African presence in the Americas such as the Olmecs that may also provide us with alternative perspectives on the builders of Tenochtitlan.

Nevertheless, it remains to be seen whether this position may change in time as more archaeological discoveries are made.

0 replies on “Tenochtitlan Aztec City Of The Anunnaki”