Einstein’s Theory of Relativity theoretically established the possibility of collapsing and connecting two regions of Space-Time in order to create a wormhole that would enable us to move between vast distances at up to 10 times faster than the speed of light.

The Stargate Portals at Ancient Sites were regarded as the means by which the Gods transitioned between the realm of the Gods and Man.

For instance, the Gate of The Sun at Tiahuanaco is supposed to have served as the gate for the entrance of the God Viracocha who according to ancient belief was responsible for building the site. 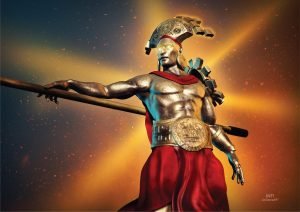 Similarly, other Ancient Sites in South America like the Gate Of The Gods at Peru’s Puerta De Haya Marca site were also believed to be Gateways through which chosen Heroes of the people would travel to join the Gods and periodically return to observe and report on the people’s progress.

Macchu Pichu is also said to incorporate 3 Portals through which the 3 Sons of the Gods came and established the Incan Civilization.

Its no surprise that Ancient Egypt also has its own Stargate.

In particular, the Sun Temple Of Nyuserre was said to harness Earth Vibrational Energy to create Spiritual resonance that would enhance enlightenment in order to facilitate transportation and communication with the ream of the Neter Gods.

The fact that 14 Earth Ley Lines converge at Stonehenge also suggests that it was built harness Earth Energy in order to power an interdimensional Portal.

Similarly, Gobleki Tepe, the world’s oldest Ancient Site is also constructed atop Ley lines, this coupled with its astronomical alignment to the Cygnus Constellation has led some to suggest that it was another Stargate Portal through which the Ancient Gods entered our realm.

It should come as no surprise that a Stargate is also said to have existed at Eridu, the first Sumerian City established by the Anunnaki in Mesopotamia.

Although it is currently buried in the desert Sands, it would have served as the Portal used by the Sumerian Gods.

The concept of Ancient Stargates is not inconsistent with modern Science.

The references made in Ancient Texts to certain structures as magical gateways of the Gods can possibly be interpreted as a reference to Stargates in the language and idiom of the time.

Ultimately, the Stargate theory does not form part of the mainstream understanding of Ancient Sites, even though it may serve as an explanation for some of the Ancient mythology and is Scientifically possible.

The research on the Stargate Theory is ongoing and some interesting observations are made in the featured Stargates Of The Ancients documentary.

History Of The Anglo-Ashanti Resistance Wars