Squid Game, is a Netflix series which can be regarded as a modern critique of late stage capitalism made in Korea by Hwang Dong-Hyuk which within 10 days of its release became the platform’s highest-ranking show in 90 countries. Squid Game as a critique on the problems associated with late stage capitalism owes its popularity to anxieties of modern life.

Squid Game is the first South Korean drama to top the US Netflix charts and its core message is ‘can l ever repay this debt’, the haunting mantra of modern day late stage capitalism.

Squid Game’s leading character Seong Gi-Hun problem’s are typical of most people in a society showing the signs of late stage capitalism.

Gi-Hun is in debt, troubled and living off his mother’s meagre earnings. He is also divorced, has a daughter he cannot support and battles with alcoholism and gambling addictions. Then together with hundreds of cash-strapped contestants He accepta an invitation to compete in children’s games for a tempting prize (45.6bn Korean won (about R568m), but the stakes are deadly!

The 456 contestants are horrifically introduced to their fate in the first game “Red Light”. In this game a giant robot shoots to kill anyone who moves after it shouts, ‘red light!’ an instruction to freeze and not move.

More than half of the participants are killed without mercy. Panic sets in for the remaining contestants and a voting system is decided on either to continue with the game or not. The irony is towards the end of the season, contestant number one, a dying old man with a brain tumour and who makes the deciding vote to end the games initially, leading to the release of all participants turns out the be one of the rich who initiated the game in the first place for their amusement, the ‘VIP team’. 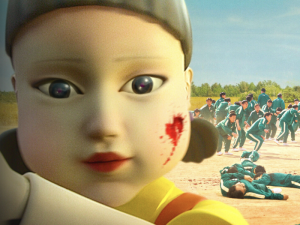 Squid Game has nine episodes, each running for an hour long at most. Korean children’s games are played in each episode as and anyone who fails any of the games is eliminated, in this case, killed. Squid Game depicts a dystopian, macabre late stage Capitalist society in which marginalised people are pitted against one another in traditional children’s games. While the victor can earn millions in cash, losing players are killed.

Various factors start to interact and influence the group of contestants in Squid Game. From the formation of tribes (borders, nationalism, ‘them and us ‘etc), turning on each other as resources ‘deplete’ (artificial scarcity created by the rich and powerful to betrayal, hedonism, suicide, challenging the ‘God’ concept, as each participant fights to survive and win the prized money which increased with each dead contestant.

The drama is quite compelling.

It is not a suprise the time period the author was inspired to create and write Squid Game was in itself a period in which the world suffered from the 2008 global financial crises  which has been the invidious punctuation point of late stage Capitalism to date.

In America many people lost their homes and livelihoods, and the ripple effects were felt through the world.  Rates of suicides increased, and the dystopia of a capitalist world came to visit most people’s home in jarring and irreversible ways. 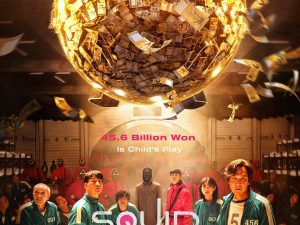 Most people in our late stage Captialist Society today are scrapping for breadcrumbs and are ‘used’ as ‘puppet dolls’ for entertainment for the rich and powerful, showing the drawbacks with late stage Capitalism.

In addition, late stage Capitalism also encourages mass consumption, is unsustainable, and provides an incentive for business owners to harm the environment for monetary gain.

Furthermore, from the.Covid-19 crisis it is clear how vulnerable, unstable and unreliable our late stage Capitalist society is.

Death game genres like Squid game, Survivor series, Fear Factor, The Hunger Games among others are therefore important critiques and commentaries on late stage Capitalism as a system of social organisation.

In dystopian surroundings, whether that’s Battle Royale, the Hunger Games, Maze Runner, Exam, or Squid Game, characters play to the death. Life is trivial, victory is lavish, the rules are strategic but there’s a huge amount of luck involved: in Squid Game, there’s a tug-of-war.

Johnson elaborates over Zoom: “If you get put on the weaker team, you just lose, bad luck, you die. In Battle Royale, and you have a flick knife instead of an Uzi, you just lose.”

In his view, the genre is, at heart, a critique of the “central implicit idea of the late-capitalist world, that everything is hard work, everything is skill, everybody gets to where they belong in a perfect global society. All those claims are shown to be nothing.” 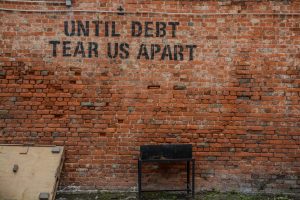 Squid Game owes its success to underlying anxieties of modern late stage Capitalist society, and the COVID-19 pandemic has only heightened those anxieties. The threat is debt, poverty and ever growing inequality.

Helen Garnham, head of equalities at Rethink Mental Illness, describes how debt brings together denial, a sense of impotence because it often feels as though “nothing can be done, it can just seem overwhelming”, and a “huge stigma, people don’t like to admit to debt or seek help, they feel they have to manage it on their own”. Garnham points out this irony, that so much work has gone into reducing the taboos around mental health, “that’s what we’ve been trying to say, it’s OK not to be OK”, but debt, such an important tributary to mental illness, is still wreathed in shame.

Household debt in South Korea has risen in recent years and is now equivalent to more than 100% of GDP – a level not seen elsewhere in Asia. Indebtedness has gone hand in hand with a dramatically widening income gap, exacerbated by rising youth unemployment and property prices in big cities beyond the means of most ordinary workers.

As Squid Game illustrates, a sudden redundancy, a bad investment or simply a run of bad luck can force people to turn to high-risk lenders just to keep their heads above water in today’s late stage Capitalist Society. 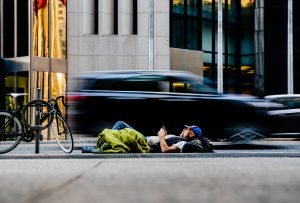 The 456 contestants in Squid Game are a media representation of most people in late stage Capitalist Society today; which explains why Squid Game is popular and relatable across all cultures, race, language.

The misery of crushing debt in a failing late stage capitalist system is global and universal.

We are in real-time all in a Squid Game!

0 replies on “Squid Game: A Critique Of Late Stage Capitalism”