The Coronavirus pandemic appears to be another Sputnik Moment not only for America but the rest of the world.

In order to understand the current Coronavirus Sputnik moment, we must revist the Cold War.

After the shock and awe of the moment had subsided, the United States responded by accelerating the development of Military and Space Technology which ultimately led to improvements in Education and the landing of the first man on the moon under the Appollo program.

It remains to be seen whether a post-2008 Financial Crisis America is capable of the same kind of decisive response it was able to muster against the Soviet Union in the 1950s.

At this point however, it seems that the Network Revolution has produced the contradiction of Network Age Companies worth Billions but whose virtual products do not appear useful in a situation such as the present.

Even the promise of Artificial Intelligence predictive modelling has failed to deliver a useful model to help in tackling the pandemic.

The Network Revolution has given us Companies like Facebook, Google and YouTube who despite being recognised as the most valuable companies, are actually incapable of producing anything of practical use in a situation such as the present.

So why are these Companies valuable, and what has led to this anomaly which has been exposed by a Biological threat that cannot be resolved with the virtual ‘products’ of Network Age Companies?

In ‘Who Owns The Future’, Silicon Valley Insider Jaron Lanier makes the point that the rise of the Internet has led to an unexpected concentration of wealth and power in a few Corporations that run the most dominant Servers online.

In the Network Age, the production of value has been shifted to Siren Servers and their ability to process big data.

But what has this actually produced?

The Coronavirus makes it clear that what has been produced is nothing more than what Jaron Lanier terms Behaviour Modification Empires who use big data to manipulate User behaviour Online in order to build predictive models that will result in higher advertising revenues for Siren Server Owners.

The extension of Siren Servers to the Economy through Algorithm Based High Frequency Trading has also resulted in the creation of wealth that is not linked to any actual production, but rather to the ability of Algorithms to utilise data in such a way as to formulate Trading Patterns that generate profits.

These data based profits do not result in any additional production in the Economy but are based purely on analysis.

In such a world, I wonder whether we can speak of any ‘value’ in the world economy when no additional goods or services need to be added in order to create it, and it is simply enough to observe patterns by processing data in order to identify opportunities.

Is it therefore a surprise that despite America’s ‘wealth’ it doesnt have enough medical equipment like basic masks to deal with the Coronavirus pandemic?

What can be deduced from this new definition of wealth which has no correlation to physical reality is that it exists purely in Computers, and that we have become fundamentally a Virtual Civilization.

Civilization As A Fiction

Civilization has to some extent been reliant on virtual fictions from the outset, requiring some sort of joint hallucination and imagination when it came to concepts such as ‘Money’, ‘Law’, ‘Nationalism’ and ‘Religion’.

As such,  whilst some form of imagination has been necessary to maintain and advance Civilization, most fictions have actually been useful and served a practical purpose.

The fiction of Money in its original form is one good example which led eventually to the concept of Credit and the expansion of the Global Economy.

Nevertheless, in the Network Age, the fictions of Civilization have been distilled into something Toxic divorced from reality and that does not serve us.

In the realm of physical reality, the best technological advancements are now used in War to develop ‘smart bombs’ and drones whilst Networks are used mainly for advanced data analysis in order to fabricate distorted concepts and vessels of value.

In reality, Network effects have also exarcabated the ‘bread and circuses’ phenomenon typical at the decline of the Roman Empire by providing us with our own unique blend of visceral distractions in the form of Entertainment like Music, Sports and Pornography which are available 24 hours a day, for 365 days of the year thanks to the Internet.

In the end, what is the point of all this if we cannot come up with a solution to the Coronavirus and have to shut down the world because of a Germ?

Why are Google and Facebook so valuable when they cannot provide a single tool outside the realm of virtual computer reality to deal with the Coronavirus Pandemic?

The Rise and Fall Of Civilizations

The History of Humanity is filled with the stories of Civilizations that have risen and fallen mainly because of their hubris. 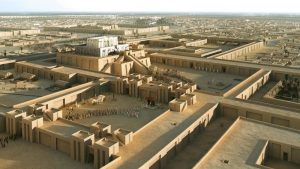 Perhaps the Coronavirus is a wake up call to our Civilization to understand that we do not live in a virtual reality.

Our solutions and technology should acknowledge our basic Biology because in failing to do so as we remain pre-occupied with the construction of virtual Citadels and fictions, something as basic and Biological as the Coronavirus will come along and remind us of who and what we really are.

Whilst its true that the story of how we got here can be explained by reference to the decline of the World Order established after World War 2, these explanations that highlight the issue as a crisis of Capitalism are correct in that they point out the limitations of Central Banking and the effects of Globalization, its also important to realise that we are not confronted merely with a crisis of markets, but rather the entire Cognitive Model we have used to contruct our Civilization with the assistance of Network Effects.

If the Coronavirus is anything to go by, it seems the result has been a Virtual Civilization that does not produce anything real, and as a result we find ourselves in the present predicament where even the wealthiest nations lack the basic equipment to deal with the basic Biological reality of the Coronavirus.

So far the solutions proposed even in South Africa suggest an attempt to preserve Capitalism rather than to acknowledge its weaknesses, limitations and abuses in the Network Age which makes the concept of free markets obsolete due to the use of dominant Siren Servers on Financial Markets.

In reality, the solutions advanced make me question why the Cold War was even fought because they all point to some kind of Social Welfare based Socialist Order being recognised as the best means for dealing with the crisis.

One wonders whether we should not have built a Society based on what is being implemented now to resolve the crisis, and if the crisis would have existed at all if we had.

The fact that China has demonstrated that its Command style Economy and Political system is effective at not only dealing with the virus domestically, but also in producing actual goods and products to supply to the rest of the World to combat the crisis suggests that Socialism or Centralised Planning rather than corrupt ‘free markets’ may have yielded something better.

American prestige has been seriously dented, and it remains to be seen whether the Coronavirus pandemic  will turn out to be a Suez Crisis moment that decisively and irreversibly shifts Global Hegemony to China and its allies.

The Coronavirus pandemic also places America in the same position as it was with the launch of Sputnik in 1957, but Covid 19 demands a response from America as well as the rest of the world which has been equally endangered and exposed by the Pandemic.

Lets hope in future the use of Artificial Intelligence will grow beyond creating Behaviour Modification Empires and Smart Weapons.

The Coronavirus was an opportunity for A.I. to deliver on its promise but at this stage we cant tell if it well ever be used for anything more than manipulating Voters.

We are at a critical point in our History as a species, and the Coronavirus Sputnik moment is an opportunity to reflect and consider how we can re-organise our entire Civilization.

0 replies on “The Coronavirus Sputnik Moment”