As a result, Ancient Astronaut Theorists claim that the great antiquity of the Sphinx may point to the fact that it was built by the same lost Alien Civilization that may have left some of the unexplained Out Of Place Artifacts.

Also In support of the Ancient Astronaut Hypothesis argument that the Sphinx may have been built by Aliens is a forensic facial reconstruction of the Pyramid face and Khafre’s Statue which shows that the face on the Sphinx did not belong to Khafre but may actually be that of a woman.

Unexplained Riddle Of The Alien Origins Of The Sphinx

Further evidence in support of the Ancient Astronaut Theory that the Sphinx was built by Aliens is shown by the Astronomical significance that lies in the fact that the face of the Sphinx is in the form of a Lion.

Roughly every 2000 years and because of the phenomenon of the precession of the equinoxes, the Sun on the Spring Equinox rises against the background of a different Star constellation. For the past 2000 years that constellation has been Pisces, the Christian fish symbol.

Prior to the age of Pisces, the Sun rose against the background of the age of Aries Constellation signified by the Ram.

For this reason, the Ancient Astronaut Hypothesis states that The Sphinx may represent the constellation of Leo the Lion which would have been the stellar background against which the Sun rose around 10 000BC.

All this points to the possibility that the Sphinx was built by an unknown group of Aliens.

Furthermore, in the Earth Chronicles, Zecharia Sitchin suggests that the Sphinx was designed and precisely located in terms of exact latitude and longitude by the Anunnaki Alien Gods of Mesopotamia.

In Book 3, The Wars of Gods and Men, Sitchin presents a diagram of the layout of the area of the Sphinx in Giza all the way through to Sinai Israel and Lebanon.

From the layout, a dotted line runs from Giza to where Sitchin proposes that the Anunnaki Alien Gods built Spaceport facilities in the Sinai which were connected to the Egyptian Pyramids, with the Great Pyramid where the Sphinx is located being used as part of a runway line directing incoming Alien spacecraft. 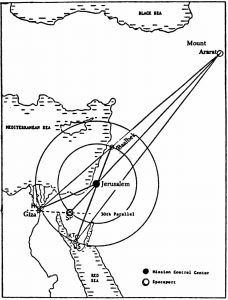 Ultimately, the lack of consensus among academics coupled with the alternative Astronomical and Archeological findings uncovered by Ancient Astronaut Theorists raises a possibility that the Sphinx may have been built by Aliens because it is much older than the current view promoted in Egyptology.

While a few academic scholars and amateur archaeologists such as Hancock propose the existence of a Lost Civilization that may be responsible for the Sphinx, none of them really takes the leap in dealing with the next logical questions which would be who were the lost Builders of the Sphinx and where did they come from before they built the Sphinx?

Whilst his theories are disputed, Zecharia Sitchin has attempted to answer this question of who built the Sphinx by stating that the Lost Civilization that built the Sphinx is that of the Aliens known as the Ancient Astronaut Gods of Mesopotamia or the Anunnaki.

Given the doubts raised and lack of consensus, it would not be sensible to completely close ourselves to the possibility of alternative explanations both now and in the future claiming that the Sphinx was built by Aliens because the mysteries of other Ancient Sites like Gobekli Tepe still remain unresolved.

0 replies on “Ancient Astronaut Origins Of The Sphinx”