Perhaps nothing epitomises the horror of the Trans-Atlantic Slave Trade more than the dreaded Middle Passage.

It was the mid-point of the Trans-Atlantic trip as European Ships transported Slave cargo across the Atlantic to the Plantations on the West Indies after they had off-loaded their goods in exchange for Slaves on the African Coast.

The journey took at least three to four months, and is a true testament to Slavery’s inhumanity.

Journey On The Middle Passage

Slaves captured in the African interior were brought to Slave Forts such as Elmina Castle where they were kept or rather ‘stored’, waiting in large dark, disease-ridden holding cells for months before their Ships were ready to leave.

In the meantime, Africans would be languishing in the Slave Fort Cells with no concept of what lay ahead, or even where they were.

Once the Ships were ready to leave, Africans were densely packed onto the Ships, lying in rowed chains on the floor of the Shipâ€™s hold, and on shelves all around the hull.

In order to cater for â€˜collateral lossesâ€™, some Ships carried more than 500 Africans per trip. It was also standard practice to separate women and children, and to mix Africans from different Tribes so as to limit the prospects of a revolt which were unsurprisingly frequent.

For the entire journey, Slaves were at the total mercy of the Shipâ€™s crew, and because the Slaves outnumbered the Crew, the prospect of a Slave Revolt always loomed.

In order to exercise Psychological control over the Slaves, any show of resistance was met with brute force including regular floggings or throwing difficult Slaves overboard. In addition, African women were available for the sexual entertainment and amusement of the Sailors at any time, and many were raped.

Food came in the form of a cereal porridge that was basically thrown at the Slaves who had to scramble amongst each other to get a portion. With no ablution facilities, conditions were filthy as Slaves slept and ate in their own excrement.

This descriptionÂ fromÂ ‘The Interesting Narrative of the Life of Olaudah Equiano’, a former Slave records the horrors of the Middle Passage:

At last, when the ship we were in, had got in all her cargo, they made ready with many fearful noises, and we were all put under deck, so that we could not see how they managed the vessel. …The stench of the hold while we were on the coast was so intolerably loathsome….The closeness of the place, and the heat of the climate, added to the number in the ship, which was so crowded that each had scarcely room to turn himself, almost suffocated us. This produced copious perspirations, so that the air soon became unfit for respiration, from a variety of loathsome smells, and brought on a sickness among the slaves, of which many died — thus falling victims to the improvident avarice, as I may call it, of their purchasers.â€

Unsurprisingly, the death toll on Slave Ships was high with at least 25% of the Slaves on board dying per trip. Diseases like dysentery, smallpox and scurvy were rampant, and the sick were frequently thrown overboard to prevent the spread of disease on the Ships because it was argued that sick Africans posed a threat to the remaining cargo and crew. 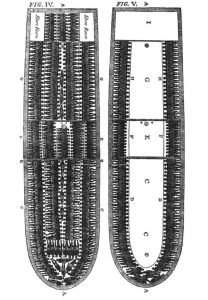 The number of Slaves thrown aboard or who chose to commit suicide by throwing themselves overboard was so significant that Sharks began to follow Slave Ships in order to feast on Slave corpses.

Slaves were not the only victims of the Middle Passage however, because the harrowing experience also exerted a toll on Slave Ship Crews with a reported death toll as high as 20% being reported amongst them. In the end, the Middle Passage traumatised both the Slaves and their Captors as they were confronted with the naked inhumanity of their business.

Legacy Of The Trans-Atlantic Slave Trade

Surviving records in the form of Letters, Crew diaries, logbooks and Ship company records have helped us get insight into the middle passage.

Famous Court cases such as the one involving the revolting Mende Slaves of the Ship Amistad, British Parliamentary investigations, and the efforts of Abolitionists like William Wilberforce also helped bring light to the horrors of the Middle Passage, its impact as proof of the nefarious nature of Slavery, and why it should be abolished.

This led to the Abolition of the Trade by the British in 1807, although Slaves continued to be brought into the United States until 1862.

It is those Africans that would hel shape the modern world in the face of such odds. 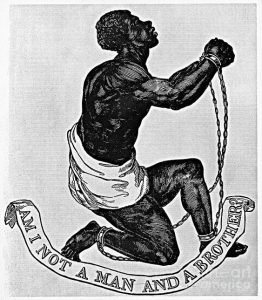 The Middle Passage scene from the Steven Spielberg Film Amistad, starring Djimon Hounsou has been praised for its depiction of the dreaded Middle Passage.

In Part 2 we look at next stage of the journey as the survivors of the Middle Passage begin life in the Alien world of the West Indies Sugar Plantations.

For more on the History of Pre-Colonial Africa, Slavery and Black resistance you can check out our Archives here: