Slavery has existed in various forms throughout history.

In the Slavery series, we revisit Slavery in Africa, and the various forms in which it has existed over time beginning with Slavery in South Africa at the Cape Colony.

Origins Of The Cape Colony

The Dutch landed at the Cape in 1652 with the aim of establishing a refreshment outpost for Dutch East India Company Ships enroute to the East.

However, as time went on. after initially establishing trade relations with the Khoisan occupants of the Cape Colony, the Dutch settlement expanded and became permanent in 1657 when the Dutch East India Company granted land rights to 9 Employees.

These land rights were over Khoisan grazing pastures and they sparked a series of Wars culmintating in the 1659 Dutch Khoisan Wars.

The result was the establishment of a Dutch settlement enclave which would be expanded into a Fort and form the foundation for increased European immigration and settlement at the Cape. 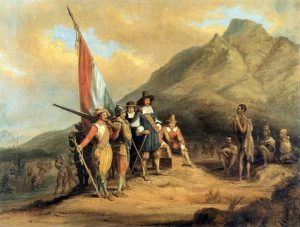 Slavery At The Cape Colony

Increased Dutch settlement created a demand for labour which was supplied by the new Khoisan working class that had been absorbed into the Dutch enclave.

In addition, from about 1658 onwards, Slaves were brought to the Cape mainly from Asia, Madagascar and Mozambique where they were put to work on Dutch East India Company Farms and Colonial Infrastructure Projects with most Slaves working on Settler Farms as labourers and domestic servants.

Slavery at the Cape continued until the Dutch lost possession of the Colony to the British.

The period of British occupation commenced from 1805, and Slavery at the Cape was eventually abolished in 1834 with the abolition of the Transatlantic Slave Trade.

Legacy Of Slavery At The Cape

Slavery at the Cape Colony produced a unique Culture characterised by the evolution of the Afrikaans language and Cape Malay culture which evolved into what is now a distinctive ‘Cape Coloured’ and ‘Afrikaner’ identity in modern day South Africa.

The Asian influence brought by imported Slaves also led to the introduction of Islam which still remains a significant aspect of Cape Culture today.

In the final analysis, Slavery at the Cape was motivated intitially by the commercial demands of the Dutch East India Company and Settler community.

However, the unintended consequences of Slavery at the Cape left an indelible mark on South Africa as the identities and cultures that emerged out of the era of Cape Slavery would be the basis for South Africa’s Racial Aparthied State that would be eventually overthrown by a Mass liberation struggle whuch would create the modern South African State.

Enjoy the featured documentary on Slavery at the Cape Colony:

0 replies on “Slavery In South Africa At The Cape Colony”