Sitchin’s Ancient Astronaut Hypothesis suggesting that a Race of Alien Beings called the Anunnaki started Civilization in Ancient Sumer is false and wrong according to Academic Historians like Dr Michael Heiser.

In this entry, we look at whether the Ancient Astronaut Theory is false based on the Cuneiform Translation errors in Sitchin’s work according to Ancient Semetic language Scholars like Dr Heiser and Dr Clyde Winters.

Whilst they are referred to as Gods in Sumerian literature, there is no reference or connection between the Anunnaki and the Planet Nibiru as claimed by Zechariah Sitchin’s Ancient Astronaut Theory.

In particular, the Sumerians themselves did not believe what Ancient Astronaut Theorists claim that the Anunnaki descended from the Planet Nibiru which orbits every 3 600 years.

The references to the Anunnaki and Nibiru in support of the Ancient Astronaut Theory are a wrong distortion of Sumerian Astronomy and literature which becomes clearer once Nibiru is understood in accordance with actual Sumerian Astronomy.

According to the  “Tera-Neter” Tile discovery made underneath the early Egyptian Dynastic Temple at Abydos, the Anu were the first people of the Nile Valley and founded Kemetic Civilization when they developed the Ta-Seti Culture of Pre-Dynastic Egypt recognised as the world’s Oldest Civilization.

The translation of the Glazed Carving depicting the Anu as the first people of Egypt describes the Black “Anu” Man as “The High Priest Tera Neter of the Temples of the God Seth of the Cities of the Anu Peoples”.

Although it is disputed, the Tera Neter Tile has been used as evidence to demonstrate that the Anu were the first settlers of Egypt or Kemet that developed a High Kemetic Civilization which may have been the result of a developmental cycle going back as far as 10 000 BC which was then inherited by Egypt’s First Dynasty under Narmer.

According to the Anu Theory, the origin of Civilization in Egypt can be found in the first Black African settlers of Egypt, specifically the Ethiopian Anu.

It is from the Anu of Egypt’s Pre-Dynastic period that the Egyptians get most of their laws and culture including learning to Honor Kings and Gods, how to bury them, sculpture and writing all of which were invented by the Ethiopian Anu who first inhabited Egypt.

As such, references to the Anu in Sumerian Texts may be a reference to the indigenous Anu People of Pre-Dynastic Egypt rather than the Sumerian Anunnaki Ancient Alien Astronaut Gods of Sitchin’s Earth Chronicles.

The Mula.Pin Tablet contains the Astronomical knowledge of the Sumerians, and its contents also suggest that the Ancient Astronaut Hypothesis is incorrect.

In this Tablet, Nibiru is recognised specifically as one of the 7 Planets which the Sumerians knew of, which were Mercury, Venus, Mars, Jupiter, Saturn, the Sun and the Earth.

As such, Nibiru was not the name of a 12th Planet of the Sumerians as claimed by Ancient Astronaut Theorists. Instead, it was just one of the 7 Planets the Sumerians already recognised and observed.

The term Nibiru meant a place of the crossing and could be associated with any Planet during the Equinox. It was not considered an additional Planet beyond Pluto as claimed by the Ancient Astronaut Hypothesis because the last observable Planet to the Sumerians was Saturn.

From the above its clear that the Ancient Astronaut Theory and in its interpretation of Sumerian Astronomy is false especially on the place held by Nibiru in Sumerian Astronomy which did not regard it as an actual Planet but simply a location in the Skies.

Sumerian Cylinder VA243 is often used by Ancient Astronaut Theorists as proof that the Sumerians had knowledge of 12 Planets.

However, on closer inspection, the seal’s inscription does not at all refer to Gods of the 12th  Planet, but actually depicts a Star Constellation according to standard Sumerian iconography. 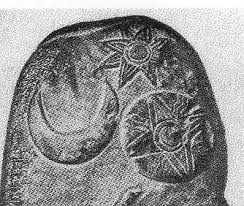 Sumerians depicted Stars and the Sun using separate symbols, and the symbol used on Cylinder VA243 is that of a Star Constellation shown by a single Star surrounded by the other Stars that would have made up the Constellation.

It is not a symbol of the Sun surrounded by the other Planets of our Solar system to make up 12 Planets as the Ancient Astronaut Hypothesis claims.

Cylinder VA243 therefore does not support the existence of Nibiru as a 12th Planet, let alone the idea that the Anunnaki came to Earth from this particular Planet.

Therefore, the Ancient Astronaut Hypothesis is false in its interpretation of Cylinder VA243.

In addition, Dr Clyde Winters has provided an alternative interpretation of Cylinder VA243 which suggests that Sitchin’s mistranslated Cylinder VA243.

To summarize, Cylinder Seal VA243 is a good luck Talisman reminding the bearer of the seal to worship their Gods and has nothing to do with space travel by Anunnaki Ancient Astronaut Gods.

The inscriptions on Cylinder Seal VA243 therefore appear to have served as a Talisman or Amulet.

In the final analysis, based on the above, Sitchin’s Ancient Astronaut Hypothesis is a false but intriguing idea on the Extra-terrestrial Origins of Man and Civilization.

Nevertheless, whilst the Ancient Astronaut idea may be appealing, the various elements Sitchin uses to construct it are probably not supported by the Sumerian Texts themselves.

From this perspective, Sitchin’s Ancient Astronaut Theory is wrong and can only be saved by providing the reference sources for the original Texts he used so we can understand if Sitchin interpreted them in their actual Ancient context.

In the absence of this, we are presented with a false Ancient Astronaut narrative that is appealing but may really be a selective construction of separate quotes and Ancient strands of ideas woven together into what appears to be a cohesive idea that is actually a product of Sitchin’s own imagination.

Check out the video on the Anunnaki in the Sumerian Texts, and the websites sitchiniswrong as well as fringepop321 for an alternative perspective on why Sitchin’s Ancient Alien Astronaut Hypothesis is wrong.