“The Defendant’s Plea of ‘Not Guilty’ to the charge of Sexual Behaviour Undermining The Social Order has been entered into the Record”, the Judge said as he turned his stern gaze to the Restoration Inquisitor while Nzinga, the chained Brown-skinned female Defendant with Hazel eyes stared defiantly at the Courtroom ceiling which was part of the Kalakuta Empire’s Ziggurat Shaped Central Administrative Complex.

The Restoration Inquisition was the high point of The Re-Institution Party’s rise to Power after it had created the Kalakuta Empire which was founded on the African continent when all the former independent African states and territories were united under the leadership of Samori Toure in 2246.

After 2250, The Kalakuta Empire gained control of the global trade in African minerals and resources, and expanded its influence to eventually control the entire world after using the profits from the Mineral Trade to build the World’s most powerful Quantum Siren Server which had infiltrated all the other major Global Computing Networks and enabled the Kalakuta Empire to become the world’s most powerful State.

In 2301, a Moral Restoration Inquisition was initiated by the Kalakuta Empire after a worldwide Government study had revealed that between the Ages 15-30 there were more Male Virgins than Female ones throughout the World.

This discovery had precipitated the Virgin Crisis throughout the Empire, and the Restoration Inquisition had been instituted as a way of understanding, arresting and reversing the crisis.

The Requisition Inquisitor and Judge were both dressed in Orange Kente Cloths decorated with Brown Adinkra Truth symbols together with Wooden Judicial Masks shaped in the face of the Ancient Kemetian Neter Maat.

“Begin your address.”, the Judge ordered motioning to the Inquisitor.

Guza, a Tall dark Man with an athletic build and a gaze that penetrated his Judicial Mask then slowly stepped to the Podium and commenced his animated address.

“Our problems began in the 20th Century when the United States and other Western democracies gave in to Women’s demands for sexual liberation!

Before the 1960s our women’s sexuality was always tightly controlled throughout the World because we all agreed that if a woman had multiple sexual partners, she would eventually fall pregnant.

This would create problems for Society because if a man is not present to take care of the child, then the society as a whole will have to take care of that woman and her child which will mean that both Mother and Child will become the burden of the State.

In addition, before the arrival of modern technology if a woman had slept with many men, then nobody would have been able to tell who the father of her child was.

The arrival of Birth Control and DNA Testing Technology should not have relieved Women from their primary responsibility to always know through their own virtue who the Fathers of their Children were, and yet this technology only served to reinforce Women in their promiscuous ways.

For these reasons, our Civilization always wanted to ensure that women didn’t sleep around so that they didnt get pregnant out of wedlock.

The Social Welfare Programs we introduced to assist Single Mothers only encouraged women to sleep around even more because they knew that the children born of their trysts would be the burden of the State.

With sexual liberation, our great Society effectively funded women’s promiscuity as the single mother phenomenon became more acceptable because women would no longer have to face the consequences of their Sins.

The Abortion Laws also only saved Women from dealing with the results of their promiscuity.

Furthermore, with time, women acquired more rights under the Law and as they moved up the Social ladder, they came to need us less as Men, so they became even more entitled whilst they saw less value in submitting to us as their natural Guardians and Protectors.

From the above, if we are to learn anything from History, it is that in order to prevent the collapse of our great society, we must stop women’s sexual freedom because it encourages the decay of our Social Order.

In-fact, I will go as far as to suggest that the decline of the Western democracies that allowed us to usurp their power and position so the Kalakuta Empire could become the dominant World Power was a direct result of the gradual decay in Western Societies because of the sexual liberation of women.

In the end, the cultural decline weakened Western democracies to such a grave extent and we will not let the same thing happen to us.

So today because of women’s sexual liberation, we now find ourselves in the ridiculous situation where there are more Male Virgins than Female Ones.

This is nothing less than a Crime against Mother Nature Herself, and we all understand that the need to correct this problem is the reason for this Inquisition.

As this woman stands before us today, our Righteous Movement is called upon to show the courage necessary to implement the Final Solution by condemning the Women of our Society who are all guilty of Sexual Behaviour Undermining The Social Order.

The unequivocal condemnation of Women is the only logical step, and I call upon you to carry out your duty to the Empire by finding Women Guilty as charged.

This will pave the way for us to abolish all the Laws and Freedoms that have allowed Women to become promiscuous so that we can return to the world of our forefathers before Women’s sexual liberation when Women did not have children out of wedlock.

The Siberian Gulags have already been prepared to imprison and execute all Women who resist our New World Order promoting Female Chastity for a safe and secure Society.”

The Restoration Inquisitor slowly stepped off the Podium to uproarious applause as he finished his address. 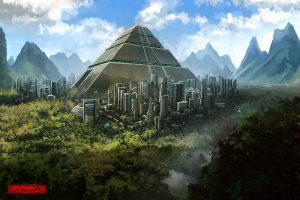 ‘Thank you for your concise submissions. Let us hear if she has anything to say in the defence of Women’.

The Judge impatiently motioned Nzinga to speak with his hands as the Bailiff slowly escorted Nzinga to the Podium.

“Firstly, it should be noted on the record that I do not recognise the legitimacy of this Inquisition even though I have chosen to address it. Please let the record reflect that for the sake of future generations”, Nzinga spoke in a humble but firm tone as a deafening silence fell across the room.

The silence was sporadically punctuated by laboured breaths escaping from the Judicial Masks.

“Women have been blind to our faults from time to time, however, the myopia of this Tribunal defies both fact and description, Nzinga continued.

You all speak of a crime against the Social Order because you have discovered that there are more Male Virgins than Female ones.

Firstly, who are you to presume to know what Natural Social Order Mother Nature intended?

In addition, is it really true that all Men have been flawless in carrying out their duty to look after Women and Children?

It is not true, and you conveniently ignore this reality simply to create the impression that all single mothers are promiscuous as if they all bore their children out of fornication or adultery.

Have you paused to consider the Men who have deserted their children and their mothers with no valid reason?

Its correct to state that Women clamoured for rights and liberties which included the freedom to enjoy the same carnal pleasures as Men because in reality we could see no reason why the Male body deserves more carnal pleasure than our own.

Do we not come from the mould of the same Creator?

Women are also not responsible for the fact that our Female bodies by necessity made us the child bearers and thus the Biologically more vulnerable sex. As a result, from the beginning, the mating game required us to pair with a Male Partner who we could rely on to ensure our survival when we were Pregnant as well as that of the family that would be created once the children were born.

Faced with continued desertion and abandonment from unreliable Men, we had no choice but to learn to fend for ourselves and children. So we studied, acquired skills, learnt professions and started businesses on our own so we could provide without the help of Men.

In these circumstances, once we were able to provide for ourselves, it was important for us to exercise the right to make decisions about our own bodies without interference from Men. We must also not forget that Technological changes in the 21st Century led to the introduction of Universal Basic Income which further lessened our need for Men as providers.

I will however admit that Women have made some mistakes in the exercise of our sexual freedom.

Many of us used our sexual freedom to seek short term sexual pleasures with unstable Men and then saddled the few reliable Male providers with the responsibility of looking after our children born out of wedlock.

We have also not always appreciated good men in this era of sexual liberation, because the good men have generally paid the price for our freedom. Even in marriage, some of the women used Sex as a weapon to control their Husbands.

However, despite all this what we have always wanted is our respect and recognition in Society as the mating game has evolved throughout the ages.

For these reasons, in my view, these charges of Sexual Activity Undermining The Social Order are nothing more than an expression of Men’s long held desire to control our bodies and sexual freedom.

If this is not the case, why has this Tribunal also not confronted all the irresponsible Men who abandoned their Children?

Therefore, this charge of Sexual Activity Undermining The Social Order is nothing more than a thinly veiled attempt by Men to curtail Women’s hard won freedoms, and we can never really defend ourselves against this witless charge because it is absurd, meaningless and malicious!”

The Judge rose instantly, and in a fit of rage tore his Kente Cloth.

“Sacrilege..There’s need to hear anything further!!!

She is Guilty as charged, and is Sentenced to Imprisonment for Life with Torture in the Siberian Gulags.

If this is the state of our Society, then its clearly in the Empire’s interests to expand the Restoration Inquisition.

We are therefore issuing a Decree with immediate effect for the expansion of the Inquisition throughout the Empire.

This is the only remedy left to us to resolve this Crisis.”

The Judge immediately signed the Executive Order handed to him by the Requisition Inquisitor.