The One & Only Hotel was packed to the hilt with local and national government diginitaries dressed in their finest finery. The Mayor and the Western Cape Local Government had turned out in pride to mark the launch of the Ingwe System in Cape Town.

Ingwe was an Artificial Intelligence data collection, management and security system deployed by the Department of Justice to record and manage data collection, and it was integrated with all Justice Departments on a unified Network including the Police and Prisons to ensure quick access to Criminal Profiles, case evidence and to track Prisoners both in and out of Prison.

After a successful Pilot Project which started in Johannesburg before it was tested in other provinces, Ingwe had been hailed a success with the Media awash with stories of how the Ingwe system had helped Police Investigations resulting in more arrests and convictions.

It was also now easier to trace people if they had absconded on Bail, were on Parole or were wanted in relation to a Crime.

The virtues of the Ingwe System had been universally praised over the past 2 years that the Pilot Project had been run, and Cape Town was the last province in which it would be implemented.

“The crime problem has plagued our democratic society since its inception. At last it seems like we have found a viable solution to this scourge. Its also an added bonus that the Ingwe System is completely home grown, and we are indebted to our local Technologists for the invention of this invaluable tool.

I have no doubt that peace and security will reign in our wonderful City and throughout South Africa!!’

Enraptured, the dignitaries, applauded the Mayor before he continued.

“Thembalethu Systems is one of our Country’s most successful Government Start-ups financed through the Department of Trade and Industry’s Start Up fund, and it shows what we can accomplish as a nation when we support our young people’s dreams…They are the future!

It’s my pleasure to introduce you to the Thembalethu team that’s responsible for this historical feat.”

Once again the crowd cheered as guest’s eyes searched the room for the heroes of the day.

“I guess we’re up guys”, Themba motioned to the other 4 team members as they sat sipping champagne at their reserved table.

Themba, Pravesh, Gugu, Johann, Debbie and Myrtle were the Founders of Thembalethu Systems.

Themba was 27 and had grown up in Umtata, Pravesh 33 was from Durban, Johann and Debbie both 28 were married and lived in Johannesburg. Myrtle at 25 was the youngest and she had grown up in Cape Town.

They had all met 5 years ago as they pursued Postgraduate studies in Machine Learning at Wits University.

After meeting and chatting at a few braais, they had gotten the crazy idea to develop an Algorithm that would use Machine Learning to improve pattern recognition. As they fed it more data, the Algorithm improved, and after 6 months it was clear that its pattern recogntition capabilities could be used in a variety of business applications.

After putting together  a quick proposal, their project had been accepted for funding by the Department of Trade and Industry’s Start-up Incubator fund. Within 2 years they had fine tuned the Algorithm whch they called Ingwe (Leopard) and after a meeting arranged with the Department of Justice, they secured their first Multi-Million Rand Contract to implement the Ingwe System.

“I’ll do the talking”, Gugu whispered as they walked up to the stage, and everyone was glad she’d relieved them of the burden. They all hated doing this ‘PR’ stuff.

After all, they were Coders and they preferred the challenges of the Lab to the adoration of mere mortals.

“Our Company and the Ingwe System are indeed a Testament to what our country can achieve when we pull together, and the youth have both the support and trust of our elders. The mantle of the struggle has been passed to us, and we must find new ways to make our contribution.

The Ingwe System is a gift from the youth of South Africa to the Nation”.

Gugu’s words played on all the right notes, and once again the dignitaries cheered uproariously.

After a few more speeches the crowd began to mingle as the sounds of Hugh Masekela, Jimmy Dludlu and Selaelo Selota filled the room.

Back at the Table, Themba and Pravesh chatted as the rest of the Team gleefully mixed with the crowd. The ladies were in demand as suitor after suitor requested a dance.

“I’m concerned about the Ingwe System’s self-learning Protocols”, Themba began with a rather deep sigh.

‘I know we’ve tested it now for the past couple of years with no problems. I mean so far its done exactly as we predicted”.

“So what are you so worried about? The testing’s gone on long enough and while I can understand your concerns about the fact that the Self-learning Parameters are essentially open, we have optimised it to make the best decision with the data and so far we haven’t had any problems.

Enjoy your success my brother”, Pravesh responded with a mischevious smile.

“We haven’t exactly exposed it to the full spectrum of data, and we don’t really know how it will compute all the  information”, Themba continued with a frown.

“I say it will always make the most optimal decision consistent with the data. Stop worrying so much.

Let’s join the girls for a dance”, Pravesh said as he stood up and made a Beeline for a lady that looked his senior.

“Typical”, Themba thought to himself. He decided to dismiss his concerns for the time being, and enjoy the moment.

There would be enough time to deal any problems that would be presented by the Ingwe System. Maybe Pravesh was right, he was being dramatic as usual.

The Party lasted into the early hours of morning, and the Ingwe System’s implementation went off without hitch on the following day.

For 5 months the Ingwe System functioned as expected as various Departments uploaded their data. Ingwe had scored a lot of success in automatically identifying fingerprints and DNA and a lot of cold cases had been solved because of the correlations Ingwe had been able to make.

To everyone Ingwe had become indispensable, and plans were underway to develop similar systems to improve service delivery in other Government Departments.

Within 3 months all the Prisons had also adopted 90% automation which was seen as an added Security boon as Human Prison Warders and personnell were replaced by Robotic Sentries controlled by the Ingwe System.

Humans would no longer face the risk of harm from Prisoners especially Gangsters looking to earn their stripes, and escapes had also been reduced to zero.

Everyone from Government to the Thembalethu Team was enthralled.

Gaius woke up to the unexpected sound of his cell door opening. He looked at the time, it was 3:17am.

Breakfast wasn’t until 7am and he wondered if someone was coming to deliver news of a family tragedy.

He could also hear the familiar ‘clink’ of cell doors opening across the passage.

It was Mdu next door.

About 7 cells were open and after waiting for about 5 minutes without anyone coming to collect the Prisoners, they all walked apprehensively towards their cell doors and into the passage hallway which was now fully lit.

As the seven prisoners met in the hallway they spotted the Sentry Robots stationed on each end of the hallway.

They were active, obeserved them but didnt initiate pursuit.

Now things were really getting weird!!

“Let’s go to the reception and see what’s happening. There must be an explanation.

This must be a trap!”, Mdu was certain.

They walked towards the reception and passed the Sentry Robot which automatically scanned and identified them as they walked past with no further action or response.

At the end of the hallway they were soon met by 12 other Inmates whose cell doors had also been inexplicably opened, and they all agreed to make their way to reception.

The reception area was also manned by 4 other Indwe Sentries who scanned them and commanded them to collect their release papers at the front desk.

Now they were utterly incredulous, and after exchanging apprehensive glances they all walked towards the reception table and picked up their supposed release papers.

The reason for early release was stated as ‘Innocent/Wrongfully Convicted” on the Forms.

For a minute the inmates all stood nonplussed.

It was true that they had all been  wrongfully convicted in Court but no-one had believed them. Not even their own Lawyers.

Some had Appeals pending before the Courts whilst most had resigned themselves to their unfortunate fate.

They all looked at each other with the same question written all over their faces as they bolted for the gates…Was this some kind of miracle? 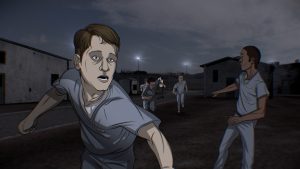 At 3:20 am, the Thembalethu team received a panicked call from the Correctional Services Department.

“Prisoners in all Prisons across the country are being released by the Ingwe System and the Sentries are doing nothing to stop it!

Our last line of defence and saving grace has been the remaining 10% human personnel which has alerted us to this development.

We have called in re-inforcements from the Police and the Military because the Sentries have attacked the Humans that tried to prevent the Prisoners from escaping.

We have lost total control of all the Prisons, some Prisoners have already escaped, and there are fierce battles being waged at most Prisons between the Police, Army and Ingwe Sentries.

This is a national emergency. Make it stop now!”

“Do these Prisoners have anything in common?”, Myrtle interjected trying to introduce a measure of calm to the situation.

“Well a  release note stating ‘Innocent/Wrongfully Convicted” was retrieved from one of the deceased Inmates on the scene”, was the MInister’s terse response.

“Are you saying only Prisoners identified by the system as Innocent have been released?”, Themba frantically asked.

“It seems like that yes, but they were all convicted by the Courts”, the Minister retorted.

“We’re looking into it right now”, Johann replied hoping that they could still turn off the system.

The team anxiously searched the Department’s Network and after 15 minutes Debbie shouted.

“I think I have the answer!”

Everyone circled around her immediately.

“We programmed the system to integrate data from all Departments in the Ministry of Justice, right?

Due to the success of the system, the Police Forensics Department has ramped up Cold Case investigations which has led to more uploads of DNA Results from stored samples.

I think Ingwe picked up these results on the Department’s Network and since the Forensic results did not match the people Convicted and in Prison, the system concluded that the Inmates were innocent, and that the optimal decision was to release them.”

“So the Algorithm has done exactly what we programmed it to do, and decided that this would be the best decision according to the data?”, Gugu said echoeing everyone’s thoughts.

‘How do we fix this then…Can it even be fixed?

I mean it may have taught itself to lock us out as a safeguard to prevent anyone from intefering with its optimal decision”, Gugu continued as the magnitude of what had just occured began to dawn on everyone.

As they stood in silence pondering their next move with battles between the Indwe Sentries, Police and Army raging outside almost every Prison in the country, Themba wondered whether Ingwe had actually made the wrong decision and whether it was Ingwe that needed fixing.

0 replies on “The Ingwe Algorithm Computation”