The Shabaka Stone is a granite Rectangular Block dating from Ancient Egypt’s Twenty-fifth Dynasty that Ruled Egypt from Nubian Kush, and according to Professor Kaba Kamene and Dr Gabriel Oyibo, the Shabaka Stone is the first Ancient African version of the Physics Big Bang Theory first written in Metaphoric Egyptian Hieroglyphic Religious Script.

The Shabaka Stone is inscribed with Egyptian Hieroglyphic Medu Neter Writing System Text, and the Shabaka Stone was made by King Shabaka, Son of Nubian King Piye, the Founder of the 25th Dynasty when he copied the contents of a decaying Papyrus first written during Egypt’s First Golden Age Dynasty during the Old Kingdom circa 3 000 BC.

According to Professor Kaba Kamene in Spirituality Before Religion, the Shabaka Stone records Ancient Afrikan Religious Philosophy that dates back to Pre-Dynastic Egypt and it is actually a Metaphoric Scientific Ancient African version of the Big Bang Theory that first speculated on the Big Bang Moment of Creation and explained the origins of the Atom, the building block of matter.

Mathematician Dr Gabriel Oyibo was nominated for a Nobel Peace Prize for his work on the Shabaka Stone after he developed Mathematical Equations from the Shabaka Stone which demonstrated that the Shabaka Stone was actually an Ancient African statement of the Unified Field Theory of Physics integrating Quantum and Particle Physics to explain the  fundamental forces and elementary particles of the Universe.

After developing the Theory Of Relativity, Albert Einstein died in search of the Grand Unified Field Theory for which Dr Oyibo was subsequently recognised for discovering by the Nobel Peace Prize Foundation.

Shabaka Stone: The Big Bang & Origins Of The Atom

Dr Kaba Kamene contends that The Shabaka Stone is based on the Egyptian Memphite Theology of Creation, which explains the Big Bang moment creation of the Universe in terms of a Metaphoric story that actually reveals the Origin of the Atom, the Building Block of all matter in the Universe according to modern Physics.

According to the Memphite Theology recorded in the Shabaka Stone, the Egyptian Neter Deity Atum was the first Primal Expression of the Supreme Being after the emergence of the Land (Hill) Ptah that rose from the Primordial Waters (Nun) after The Unseen Supreme Being emanated from the Nun Primordial Waters of inactive chaos using pure Thought expressed as Utterances or Sound (The Greek Logos).

The Shabaka Stone goes on the state that from the remaining Primeval Nun, the following Pairs of Physical Principles that are the principle Laws Of Nature emerged to form part of Atum:

(4) Amun, i.e., (Amon) and Amaunet, i.e., the Seen and the Unseen.
The Memphite Egyptian creation story of the Shabaka Stone then goes on to name the remainder of the 8 Principles that govern Natural Order.

These Eight Deities are created when Atum (Atom) divides itself into other Deities made up of a total of 4 Pairs according to the Shabaka Stone.

who are said to have given birth to four other Gods in the Shabaka Stone:

(v) Osiris (the God of omnipotence and omniscience)

(vii) Seth (the opposite of good)

Thus in the Memphite African Theology recorded in the Shabaka Stone, the Deity Atom (Atum) as the first Building Block from which everything else was formed explains how the Atom came to become the basic building block of matter from the effects of Supreme Being’s Thoughts as pure Consciousness expressed as Vibrations or Sounds in the Primordial Waters (Nun).

These same sounds used by The Supreme Being at the moment of creation are called Heka or Hekau in Ancient Metu Neter Kemetian Spirituality .

At the moment of creation, the Supreme Being by uttering the Hekau Aunkh! into the Primodrial Nun symbolised by the Ankh caused the creative explosion/eruption we now call the Big Bang . 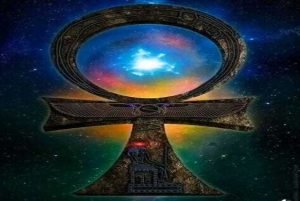 The fact that the Metaphoric Religious Metaphoric story recorded in the Shabaka Stone is actually a Scientific Theory and Explanation of the Big Bang origins of the Universe was explained convincingly by Dr. Gabriel Oyibo.

Dr. Oyibo came from Nigeria, and received his PhD in Aerodynamics and Mathematics in 1980 from Rennselaer Polytechnic Institute in Troy, New York City.

After Einstein could not come up with a Grand Unified Field Theory on the primal Forces and Building Blocks of Nature following the Great Einsten/Bohr Debate on Quantum Theory, Dr. Oyibo developed his own equation called “GAGUT”– , the “God Almighty Grand Unified Thesis” which is expressed as: G ij, j = 0, and this Equation solved the Unified Field Theory Problem Einstein also attempted to solve.

Dr Oyibo’s Equations based on the Shabaka Stone essentially mean that the Big Bang is the outcome of The Utterances (Hekau) of the Supreme Being which were expressed as the Wave Formations that produced the Electromagnetic patterns resulting in the emergence of the Atom and Matter regulated by the system of Natural Laws governing Matter usually ascribed to Newtonian Physics.

In addition,  Dr Obiya contends that according to the Shabaka Stone, the  element of Matter produced by the Supreme Being’s Utterenances or Wave Formations is Hydrogen which is the simplest Atom from which all other Atoms can be formed by simply combining Hydrogen Atoms in different numbers to make up the basic elements of Nature recorded in the Periodic Table.

In Dr Obiya’s view, the separate Elements of the Periodic Table are just combinations of basic Hydrogen Atoms in different numbers.

On this basis Dr. Oyibo demonstrated how the Ancient Kemetians contributed to world Civilization by developing an understanding of Chemistry that allowed them to manipulate elements and make compounds using a Science that was later called Alchemy (‘the mysterious Art of the Kemetians’) by the Ancient Greeks and Arabs.

In addition to being selected for the Nobel Peace Prize, Dr. Oyibo was chosen for the United States Presidential Medal of Scientific Research and he has taught at many prestigious Universities like Massachusetts Institute of Modern Technology (MIT) and the Cambridge International Biological Centre.

In the final analysis, the fact that the information contained in the Shabaka Stone dates back to the First Dynasty which was established by the Nubian Africans of Kush, demonstrates the high level of Philosophical, Spiritual and Scientifc Culture already achieved in Ancient Kemet circa 3 000 BC.

Furthermore, the Shabaka Stone demonstrates that Ancient Kemet (Egypt) was fundamentally a Scientifc Civilization built on a Religious Paradigm emphasising a Scientific understanding of the Universe through a process of Intuition and Philosophical speculation which would inspire Greek Philosophy and the evolution of modern Logic from the Renaissance period right up to the modern world.

It was this Scientific Method and Culture that had developed at Ancient Nubian Settlements like Nabta Playa which is recognised as the World’s First Astronomical site dating back 7000 BC when the the Nubian Africans of the Nile Valley Culture created a Rock Calendar tracking the movement of the Sirius Star so they could more accurately predict the Flooding of the Nile.

For these reasons, the Shabaka Stone which contains Ancient African Egyptian Knowledge known to the Egyptians since the days of the First Dynasty circa 3000 BC is the first and most Ancient version of Human speculation on the Mechanics Of Creation which is also consistent with and elaborates on the Physics Big Bang Theory, a Speculation on the origins of the Universe that was only expressed from the early 20th Century.