When I first saw the Trailer for the new Netflix Show ‘Queen Sono’, I wasn’t sure whether it was just an Africanised version of Charlie’s Angels, merely existing for the purpose of providing the novel experience of an African Spy TV Show with a female lead that lacks any real depth beyond providing well choreographed fight scenes and shootouts in Urbane African settings.

I was pleased to discover that I was completely wrong.

On the surface, Queen Sono appears to be an action packed Spy Thriller set in Post-Colonial Africa in which the main Actress, Queen Sono, played by Pearl Thusi carries out various missions as a Clandestine Operative for a Secret Government Agency called ‘SOG’.

In the course of her missions, she stumbles across evidence and information that suggests that the Agency, and by extension the Government itself is involved in some shady activities that may go back as far her own Mother’s assassination who was a well respected liberation fighter, and a member of what has now become South Africa’s Ruling Party.

Queen Sono, does well at sticking to the familiar tropes of the Spy Thriller genre we’ve seen in films like The Bourne Identity and shows like Jack Ryan. However, it goes a step further in using this as a setting for exploring the unique story of the hidden skeletons in Post-Colonial Africa’s closet.

We are given a refreshing look at the true motives and bitter internal rivalries within Africa’s Anti-Colonial Revolutionary Movements that have been glossed over by Post-Colonial Propaganda.

This is an important story that needs to be told, and is not covered in Africa’s History Books which all portray Africa’s Liberation Movements as unwavering Monolothic entities united by the single goal of overthrowing Colonial oppression.

It also goes further in demonstrating how in Post-Colonial Africa, Ruling Party rivalries can result in the abuse of Government Agencies for the personal gain of Politicians and their Benefactors.

Queen Sono therefore tackles the nature of the emerging African Deep State and its links to the Neo-Liberal agenda of Foreign Companies that seek to extract wealth from the Continent by corrupting the Political class.

The Black Rebel movement Watu Wema, appears to be a revolt against the African Deep State. 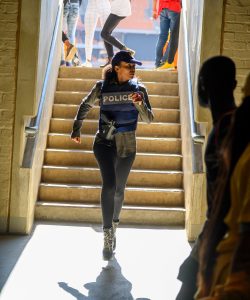 However, it remains to be seen whether its alliance with Western Capitalism represented by the Private Military Contractor, Superior Solutions will be its downfall.

Ultimately, Queen Sono is about the threats to democracy and self-determination in Africa, as well as the radical voices that recognise it, and the limited options they have to combat it.

The characters are also well developed including a complicated love interest for Queen. Its also great to see Africa’s cosmopolitan people and culture portrayed on screen.

The dialogue is irreverant, providing lots of comic relief along the way.

This shouldn’t come as a suprise, after all, Queen Sono is the brainchild of the same man who gave us the classic Pure Monate Show, and Kagiso brought his bag of tricks along for this one as well.

Really impressed by the evolution of African TV, especially after Ifalakhe, a modern rendition of the classic Heroes journey set in Pre-Colonial Africa with the same ambitions as Vikings.

We may be living through a renaissance era in African TV and Film, and it was certainly breathtaking to watch an African TV show with the technical wizardry and action sequences of Body Of Lies and narrative ambitions of Tinker, Tailor, Soldier, Spy applied to a uniquely African subject.

Queen Sono does a good job at showing that Africa’s Post-Colonial problems may have been birthed within its liberation movements during the process of its liberation, and we are presently experiencing the ramifications of this process with the emergence of the African Deep State and the sinister hidden alliances involving the new Black elite.

In the context of South Africa, Queen Sono provides a lens by which the History of the phenomenon of State Capture can be understood by pointing the finger at everyone involved.

Black, White and everything in-between…The real villain in Queen Sono is the Deep State.

Can’t wait for the next season.