Since Get Out, the Horror and Black Sci-fi genre has seen the release of Lovecraft Country, Us and Antebellum where the theme of repressed Black American violence and the Post Traumatic Slave Syndrome loom large.

In particular, the theme of repressed Black American violence seems to linger in almost every scene of these works of Black Science Fiction which is taut with the possibility that the repressed violence of Black Americans towards Whites as symbols of White Supremacy may spontaneously and unpredictably explode on Screen in the same way it threatens to combust in a seemingly ‘normal’ American Society.

Whilst Reviewers have expressed different sentiments as to the effectiveness of the violence Motif in each of these Black Science Fiction releases, its important to consider why the issue of repressed Black American and Black diaspora violence exists and where it comes from Historically.

According to Dr Joy DeGruy Leary On Post Traumatic Slave Syndrome (P.T.S.S.), is a theory that attempts to explain the behavior of African American communities in the United States and the diaspora.

Post Traumatic Slave Syndrome is treated as a Psychiatric condition that stems from the multi-generational oppression of Blacks and their descendants in America through Centuries of Slavery.

This form of Slavery was based on the idea that Blacks were inferior to Whites which was re-inforced by Institutionalized Racism in order to preserve White Supremacy which still has negative Psychological effects today. Historically

In short, the recognised symptoms of Post Traumatic Slave Syndrome are:

i) Low Self-Esteem;
ii) A Propensity for Anger and Violence;
iii) A distorted self-concept. 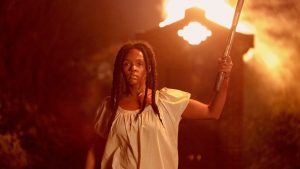 Slavery’s Racism and violence also resulted in the mental state of Blacks in America and the diaspora today that exhibits the symptoms of Post Traumatic Slave Syndrome.

As such, Get Out, Us, Lovecraft Country and Antebellumas Black Science Fiction works can be understood as expressions of the repressed violent angst felt by Black Americans and those Blacks in the diaspora still dominated by Whites who have not had the opportunity to openly express their repressed anger through outward violence towards Whites.

Africans and Black people in Africa already expressed their open violence towards the White Population as part of the Anti-Colonial Wars of liberation.

Other than the Haitian Revolution, Blacks in America and the diaspora have not violently confronted White Supremacy and purged the violence within them in the same way Africans did in the Anti-Colonial Wars.

Indeed the success of Martin Luther King’s Civil Rights Movement was predicated on its non-violent approach.

Nevertheless, it would seem that the Ghost of imminent racial violence continues to haunt America today and is now finding expression through the medium of Black Science Fiction.

In the final analysis, Get Out, Us, Lovecraft Country and Antebellum are admirable and welcome explorations of the largley ignored issue of repressed Black American and Black diaspora violence viewed through the lens of this new wave of Black Science Fiction.

The degree to which this type of Black Science Fiction succeeds in examining the issue critically and not emotionally remains to be seen.

Nevertheless at the core of each of these works of Black Science Fiction is the question of the repressed violence of Blacks in the diaspora while Blacks in Africa have already gone through the stage of open violence towards White Supremacy, and are in a different phase of Catharsis compared to Blacks in America and the diaspora who are yet to openly express their violence through open Warfare.