Playing Nintendo 80s classics like ‘Pacman’, ‘Galaga’ and off-course ‘Super Mario’ always helps with the stress. Depending on your Console preference, video games are always good fun, and they’ve now evolved into a Professional Sport.

Personally, my favourite Console will always be Nintendo because their approach to Gaming is mostly light-hearted and entertaining.

There have been ‘action’ games like ‘Double Dragon’ and ‘Mortal Kombat 1’ released on Nintendo, and I still enjoy playing these as much as I did back in the day.

Its safe to say with the advent of Sony’s Playstation, followed by Microsoft’s X-Box, the world of video games has changed dramatically with a heavy focus on what I can only describe as ‘reality simulation’.

As a result, games have become more violent and complex in their story-lines through taking advantage of the capabilities that modern computing power allows.

Games like ‘Grand Theft Auto’, ‘Halo’ and the most recent versions of ‘Mortal Kombat’ are good examples.

If you’re a Nintendo fan or a Gamer in general, then the good news is that Nintendo has re-issued its classic NES Console, and it comes preloaded with most of the classic games.

Its always a great pleasure revisiting them, and I can safely say its been one of my best purchases as far as home entertainment is concerned.

Get yourself this limited edition Console, because I’m sure it’ll also be a collector’s item in future. 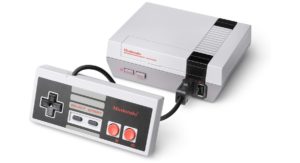 The Dark Side Of Gaming

As far as the dark side of today’s ‘virtual reality’ gaming is concerned, there’s the risk of people losing touch with reality as demonstrated by the recent story of a Korean couple who starved their infant child to death because they became too engrossed in the fantasy world of the  virtual reality game, Prius Online, a 3-D fantasy game.

There’s also been a recent match-fixing scandal in the world of Professional gaming which has affected E-Sport negatively.

Last but not least is the Gamergate scandal which brought to light questions of the treatment of women in the Gaming industry.

i also think the industry is yet to address the question of Race and Cultural representation particularly with regard to characters featured in most games.

There seems to be a long way to go here, and other players have seen the gap which probably accounts for the rise in Afrofuturist Mobile Games produced by African Companies like Ghana’s Leti Arts.

I’ll keep enjoying my old skool NES, but its safe to say Games have probably evolved into a modern literary artform.

I think Fallout is probably a good example of the power of videogames to produce valid and insightful Social Critique.

In the meantime, check out the Documentary below on the Gamergate scandal as well as our earlier interview with the people over at Leti Arts.