One of the tragedies of Colonialism was the looting of Pre-Colonial African cultural artifacts for private sale by Antique dealers and exhibition in European museums.

The Kingdom of Benin suffered this unfortunate fate following the conquest of the Kingdom by the British in 1897 in which the British pillaged the Kingdom’s Capital and made off with the immaculate Bronze statues kept at the Royal Palace.

The Kingdom of Benin thrived in modern day Nigeria dating back to the 11th Century CE.

Its Capital was located at Edo where it was ruled by a succession of Rulers or Obas until it was destroyed.

Before its conquest, Benin was an important and well developed Medieval State famous for its City Walls and recognised as a force in Global Trade. 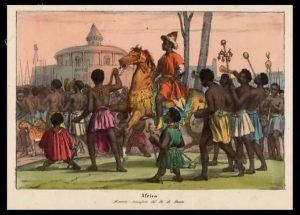 The Benin Bronzes decorated the Royal Palace and were created by the Edo people.

They are more than 1000 in number comprised of a collection of Brass, Bronze and Stone panels and sculptures

After the conquest of Benin, the collection was split amongst European Musuems and Private Collectors, and today the largest collection can be viewed at the British Museum in London.

Other Museums in Germany and the United States also possess a significant share of the Benin Kingdom’s priceless Artworks.

The Benin Bronzes caused a sensation in Europe, and were appreciated as works of Art.

They effectively changed the perception of Pre-Colonial African Art and Civilization.

With the end of Colonialism however, there have been repeated demands made to have the Benin Artworks returned to Nigeria due to their Cultural and artisitic significance, and these efforts have met with moderate success.

This ongoing saga is even reflected in the Black Panther Museum scene.

Ultimately, the Benin Bronzes dispel the myth of Pre-Colonial Africa as the Dark Continent.

They are evidence of the high culture, technology and Civilization that existed in Africa before Colonisation, and we hope one day the Bronzes will be returned to their rightful home.

In the meantime, enjoy the gallery of some of the majestic Benin Bronzes below…One!

0 replies on “The Missing Bronzes Of Benin”