Mapungubwe is an important Pre-Colonial African Kingdom because it was the first modern Iron Age Settlement which had an Aristocracy in Southern Africa. 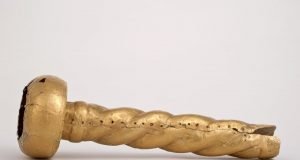 Origins Of The Kingdom Of Mapungubwe


Dating back circa 1075-1200 AD, Mapungubwe as thought to have begun as a Hunter gatherer settlement at the confluence of the Limpopo and Shashe Rivers.

With Mapungubwe’s earliest roots being traced to what is termed the Leopard Kopje K2 Culture, the Hunter-gatherer community would eventually evolve into Southern Africa’s first modern Iron Age Settlement State with the establishment of a settlement at Mapungubwe Hill.

Mapungubwe began with trade in Gold with Arab traders from the East African Coast which is thought to have provided the impetus for changes in the Hunter-gatherer Culture at Mapungubwe as traded goods like Gold and beads replaced Cattle as a measure or wealth.

This change in Mapungubwe resulted in the emergence of Southern Africa’s first Aristocracy which grew out of the class system that was borne out of the new trade-based economic system at Mapungubwe Hill.

For the first time in Southern Africa, Mapungubwe set up an Aristocracy that was separated from the general population by taking up residence on the sacred hill at Mapungubwe.

New skills in pottery and Goldsmiths which produced high value Golden objects like the famous Rhino and Gold Scepter also emerged in Mapungubwe. 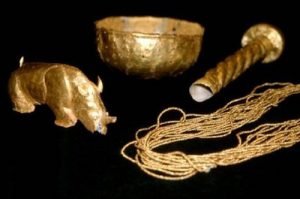 The African origin of the site of Mapungubwe has since been placed beyond dispute, and Mapungubwe  remains one of Africa’s most important sites because it was the first African Settlement in Southern Africa to develop an Aristocracy.

To date, the reasons for Mapungubwe’s decline are unclear as the site was abandoned around 1200.

All in all, it can be said that the reason Mapungubwe is important is because Mapungubwe established the first Aristocracy and model of a Proto-Culture for a class-based Society built on wealth obtained from trading in Southern Africa.

This new type of African Society that emerged in the Kingdom Of Mapungubwe was led by an emergent Aristocracy, and would be the model of subsequent Iron-Age African Settlements starting with Great Zimbabwe.