Although he is a recognised world resistance figure who even inspired Dr Martin Luther King’s Civil Rights movement, Gandhi’s resistance ideology during his time in South Africa was not based on a non-racial, all inclusive philosophy.

The youngest of four chidlren, he grew up in a very devout Religious Family to the extent that when he admitted to stealing as a young boy, his father’s response was to discipline him with love.

When he was 16 his sick father died alone during the brief time Gandhi had left his bedside to spend some time with his Wife.

This unfortunate incident would haunt Gandhi for the rest of his life.

He subsequently became a Legal Practitioner in England, but still an outsider, he could never satisfy the British criteria for acceptance as an English gentleman.

Consequently, in 1893 Gandhi relocated to Durban in South Africa, where he continued to suffer from racism and discrimination epitomised by a humiliating incident in which he was forcibly removed from a first class Train to Pretoria because he was Indian.

Until 1906, Gandhi had considered himself a faithful member of the British Empire.

However, his allegiance changed when he served as a stretch bearer during the Bambatha/ Zulu Rebellion and he witnessed the grotesque violence of British soldiers in their attempt to destroy the Zulu Nation in a succession of Zulu Wars.

His Political career began circa 1913 when South Africa’s Government decreed that all Indians be fingerprinted which included having their body marks registered. 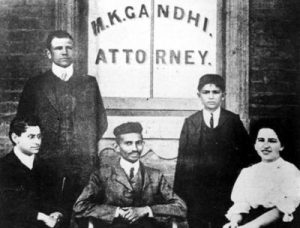 This required having indian women strip in front of  White police officers.

In addition, the Courts robbed Indian marriages of Legal recognition, a step which further infuriated Indians including Gandhi who was determined to go to prison if necessary to reverse the offensive Government decrees.

In the end, Ghandi’s non-violent resistance movement succeeded in getting the South African Government to change its position on the recognition of Indian marriages.

Although Gandhi confronted South Africa’s racist policies, he did not necessarily do so on the basis of a universal non-racial Political philosophy.

In particular, Gandhi like most other early African anti-colonial resistance movements including those led by the small African Black elite, he was primarily concerned with the privileges of his own Social class or group.

As such,  Gandhi focused on preserving the limited Economic priviliges and status held by Indians over the Native Africans within the broader racist South African State.

In describing the Indian struggle as a:

“struggle against a degradation sought to be inflicted upon us by the Europeans, who desire to degrade us to the level of the raw Kaffir whose occupation is hunting, and whose sole ambition is to collect a certain number of cattle to buy a wife with and then, pass his life in indolence and nakedness.”,  whether he intended to or not, Gandhi effectively presented Indian resistance in South Africa as motivated by a desire to prevent the decline of the more civilized Indians to the primitive low level of the Native Africans, rather than because of any notion of the intrinsic equality of all human beings.

To some degree, Gandhi’s resistance ideology actually rested on the very idea that Indians were superior to Africans, and that this state of affairs needed to be preserved at the time.

After the success of the Satyagraha campaign and aged 45, Gandhi returned to a Colonised India where he would spend the remainder of his life leading a well chronicled non-violent revolution against British colonial rule.

In the final analysis, Gandhi’s contribution to and influence on resistance movements across the world from Africa to Asia, and America cannot be denied.

Nevertheless, it must be remembered that like everyone else, his own Philosophy and views evolved over time, and so he did not emerge on the scene as the fully formed non-racial Utopian figure he is seen as today.

Regrettably, Gandhi was shot and killed by a Hindu fundamentalist on 30 January 1948.

Perhaps its a bit too easy and even slightly unfair to criticise Gandhi in hindsight, especially taking into account the fact that even early African led anti-colonial resistance began as the small enterprise of the Black elite concerned mainly with their own advancement within the Colonial system.

It was only in the face of the unyielding resistance of Colonial Governments that a Black mass resistance movement eventually emerged when the Lower Working Classes forming the majority were co-opted by the Black Elite.

Much of the Politics of Post-Colonial Africa centres on the unravelling of this alliance, as the working class demands what was promised by the Black elites during the struggle.

For this reason, it may be unfair to expect Gandhi to have developed a mass non-racial and all-inclusive resistance ideology during his time in South Africa.

It would not be until the 1940s that Africans themselves would be galvanised into creating such a movement due to the unrelenting pressures exerted by the Colonial system.

Check out the Gandhi Documentary below as well the Eps1-3 of the BBC Documentary End Of Empire on the end of British Colonial Rule in India revealing the role played by Gandhi in the independence of India.