For this reason, the Magna Carta Libertatum is an important document that changed world History.

Although it was initially annulled by the Pope, it served to demonstrate that the Powers of the Monarch with respect to Private Citizens could be limited by Civil Law.

First drafted by the Archbishop of Canterbury to make peace between the unpopular King and a group of rebel barons, it promised the protection of church rights, protection for the barons from illegal imprisonment, access to swift justice, and limitations on feudal payments to the Crown, to be implemented through a council of 25 barons. Neither side stood behind their commitments, and the charter was annulled by Pope Innocent III, leading to the First Barons’ War.

It was made an English Statute in 1297, and although it was initially passed to restrict the powers of the King with respect to other members of the Nobility, it eventually became a symbol for  Civil Rights and Liberty.

Despite the controversy around its true objectives, it nevertheless remains a significant document marking a shift in the powers of Monarch that would ultimately prove irreversible.

You can check out the full text below as well as an accompanying BBC documentary on the origins and controversy of the Magna Carta.

John, by the grace of God, king of England, lord of Ireland, duke of Normandy and Aquitaine, and count of Anjou, to the archbishop, bishops, abbots, earls, barons, justiciaries, foresters, sheriffs, stewards, servants, and to all his bailiffs and liege subjects, greetings. Know that, having regard to God and for the salvation of our soul, and those of all our ancestors and heirs, and unto the honor of God and the advancement of his holy Church and for the rectifying of our realm, we have granted as underwritten by advice of our venerable fathers, Stephen, archbishop of Canterbury, primate of all England and cardinal of the holy Roman Church, Henry, archbishop of Dublin, William of London, Peter of Winchester, Jocelyn of Bath and Glastonbury, Hugh of Lincoln, Walter of Worcester, William of Coventry, Benedict of Rochester, bishops; of Master Pandulf, subdeacon and member of the household of our lord the Pope, of brother Aymeric (master of the Knights of the Temple in England), and of the illustrious men William Marshal, earl of Pembroke, William, earl of Salisbury, William, earl of Warenne, William, earl of Arundel, Alan of Galloway (constable of Scotland), Waren Fitz Gerold, Peter Fitz Herbert, Hubert De Burgh (seneschal of Poitou), Hugh de Neville, Matthew Fitz Herbert, Thomas Basset, Alan Basset, Philip d’Aubigny, Robert of Roppesley, John Marshal, John Fitz Hugh, and others, our liegemen. 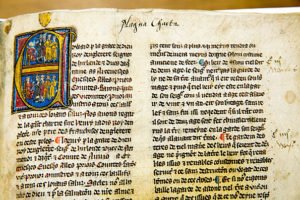