We continue with a summary of the remaining 7 Tablets from tThe Lost Book Of Enki Memoirs Of An Extraterrestrial Anunnaki Alien God (Part 2) as we in our reading of the Sumerian Anunnaki Lost Book Of Enki found buried in the deserts of modern day Iraq which is also related to the origins and history of Religion.

Parallels with the Book of Genesis continue in the Lost Book Of Enki, as the Tablets reveal the complete story of Cain and Abel as well as Noah’s Flood, coupled with a record of the first introduction of Religion and Kingship to Mankind by the Annunaki. These were introduced as ways of providing mediation and indirect control over the Human Population as the Annunaki began to exercise less direct influence, and move to control events from behind the shadows as part of the greater Cosmic Agenda that had initially brought them to Planet Ki, (Earth).

We begin our foray into the Lost Book Of Enki with a description of the progress made by Adapa, the Annunaki Lord Enki’s Son with a Human female, some thousands of years following the success of the Annunaki Genetic experiment that created the first Man or ‘Adamu’ by fusing Annunaki and Earth Hominid DNA. 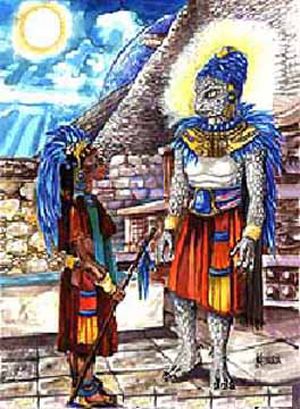 Adapa’s wide understanding amazes Nibiru’s savants
On Anu’s orders Adapa is brought to Nibiru
An Earthling’s first-ever space journey
Enki reveals Adapa’s parenting truth to Anu
Enki justifies his deed by the need for more food
Adapa is sent back to start farming and shepherding
Enlil and Enki create crop seeds and sheep lines
Ninurta teaches Ka-in crop cultivation
Marduk teaches Abael shepherding and toolmaking
Fighting over water, Ka-in strikes and kills Abael
Ka-in is tried for murder, sentenced to exile
Adapa and Titi have other offspring who intermarry
On his deathbed Adapa blesses his son Sati as his heir
A descendant, Enkime, is taken by Marduk to Lahmu.

Mankind proliferates; Adapa’s line serves as royalty
Defying Enlil, Marduk espouses an Earthling female
Celestial disturbances and climate changes affect Lahmu
The lgigi descend to Earth, seize Earthling females as wives
The promiscuous Enki begets a human son, Ziusudra
Droughts and pestilences cause suffering on Earth
Enlil sees it as fated retribution, wants to return home
Ninmah, aged by Earth’s cycles, also wants to return
A mystery emissary warns them not to defy their destiny
Signs increase of a coming calamitous Deluge
Most Anunnaki begin to depart back to Nibiru
Enlil enforces a plan to let Mankind perish
Enki and Ninmah start to preserve Earth’s Seeds of Life
The remaining Anunnaki prepare for the Day of the Deluge
Nergal, Lord of the Lower World, is to issue the warning.

The mystery emissary appears to Enki in a dream-vision
Enki is told to save Mankind through his son Ziusudra
By subterfuge Enki directs Ziusudra to build a submarine
A navigator comes aboard, bringing Earth’s seeds of life
Nibiru’s approach causes the Whiteland’s icesheet to slip
The resulting tidal wave engulfs the Earth with water
The remaining Anunnaki bewail the calamity from Earth orbit
The waters recede; Ziusudra’s boat rests on Mount Salvation
Descending in a Whirlwind, Enlil discovers Enki’s duplicity
Enki convinces Enlil it was destined by the Creator of All
They use the surviving Landing Platform as a temporary base
In a Creation Chamber there, crops and cattle are fashioned Abundant gold is discovered in the Lands Beyond the Seas
New space facilities are established in the olden lands
They include two artificial mounds and a lion-shaped carving
Ninmah offers a peace plan to resolve erupting rivalry.

The spaceport’s land, Tilmun, is declared a neutral zone
It is granted to Ninmah, who is renamed Ninharsag
Marduk gets the Dark Lands, the Enlilites the Olden Lands
Marduk’s grandsons quarrel, Satu murders Asar
Impregnating herself, Asar’s wife Asta bears Horon
In aerial battles over Tilmun, Horon vanquishes Satu
The Enlilites deem it prudent to prepare another spaceport
Enki’s son Dumuzi and Inanna, Enlil’s granddaughter, fall in love
Fearing the consequences, Marduk causes Dumuzi’s death
Seeking his body, Inanna is put to death, then resurrected
Inanna launches a war to seize and punish Marduk
The Enlilites break into his hideaway in the Great Mount
They seal the uppermost chamber to entomb Marduk alive
Marduk’s wife Sarpanit and his son Nabu plead for his life
Ningishzidda, knowing the Mount’s secrets, reaches Marduk
Marduk, his life spared, goes into exile
Enki and Enlil divide the Earth among their other sons.

The soil dries, plains and river valleys are resettled
Plentiful gold comes from the Lands Beyond the Seas
Anu and his spouse Antu arrive for a memorable visit
Reminiscing, the leaders realize they are Destiny’s pawns
They allocate three regions of civilization to Mankind
Pardoned by the departing Anu, Marduk remains rebellious
The First Region and space facilities are Enlilite lands
Man’s first civilization begins in the First Region (Sumer)
Marduk usurps a site to build an illicit launch tower
Frustrated by the Enlilites, Marduk seizes the Second Region
He deposes and exiles Ningishzidda (Thoth) to distant lands
He declares himself Ra, supreme god, in a new religion
He introduces Pharaonic reigns to mark a new civilization
Enlil assigns his son Ishkur to protect the metal sources
Inanna is granted dominion in the Third Region (Indus Valley).

Royal cities sprout with sacred precincts for the gods
Demigods serve as kings and priests in palaces and temples
Marduk promises his royal followers an eternal Afterlife
In Sumer, Inanna encourages belief in Resurrection
Celestial omens and foretelling oracles gain followings
Marduk proclaims the coming Age of the Ram as his sign
Ningishzidda builds stone observatories to show otherwise
Insurrections, wars, and invasions destabilize Enlilite lands
The mystery emissary appears to Enlil, foretells a calamity
Instructs Enlil to select a Worthy Man to lead survival
Enlil chooses Ibruum, scion of priestly royal family
Armies raised by Nabu attempt to seize the spaceport
Overruling Enki, the gods resort to Weapons of Terror
Ninurta and Nergal obliterate the spaceport and sinning cities
The drifting nuclear cloud brings death to all in Sumer.

Babili, Marduk’s chosen center, survives the calamity
Enki sees it as an omen of Marduk’s inevitable supremacy
Enlil ponders the past, Fate, and Destiny
Accepts Marduk’s supremacy, retreats to faraway lands
The brothers bid a sentimental good-bye
Enki sees the Past as a guide foretelling the Future
He decides to commit all as a record for posterity.

By the Seal of the Royal Scribe Endubsar