However, with the rise of Artificial Intelligence in our Society today, 2001’s message on the relationship between Technology and Human evolution can be considered prophetic.

In a 1968 Interview Joseph Glemis when asked what the storyline of  “2001”  was Kubrick stated that:
“…on the lowest level, that is, straightforward explanation of the plot. You begin with an artifact left on earth four million years ago by extraterrestrial explorers who observed the behavior of the man-apes of the time and decided to influence their evolutionary progression. Then you have a second artifact buried deep on the lunar surface and programmed to signal word of man’s first baby steps into the universe — a kind of cosmic burglar alarm.
And finally there’s a third artifact placed in orbit around Jupiter and waiting for the time when man has reached the outer rim of his own solar system. When the surviving astronaut, Bowman, ultimately reaches Jupiter, this artifact sweeps him into a force field or star gate that hurls him on a journey through inner and outer space and finally transports him to another part of the galaxy, where he’s placed in a human zoo approximating a hospital terrestrial environment drawn out of his own dreams and imagination.
In a timeless state, his life passes from middle age to senescence to death. He is reborn, an enhanced being, a star child, an angel, a superman, if you like, and returns to earth prepared for the next leap forward of man’s evolutionary destiny. That is what happens on the film’s simplest level. Since an encounter with an advanced interstellar intelligence would be incomprehensible within our present earthbound frames of reference, reactions to it will have elements of philosophy and metaphysics that have nothing to do with the bare plot outline itself.”
From Kubrick’s own statement about the story of 2001 A Space Odyssey and the film itself, we can attempt to summarise the true meaning of the story of 2001 A Space Odyssey as follows:

ii) The Monolith On the Moon;

iv) Beyond the infinite

The Film opens on the African Savannah plains in an effort to capture the everyday life of our ancestors before the evolution of Homo Sapiens.

Our ancestors compete with other Apes for food and water resources, in addition to facing death from predators that roam the African plains.

The historical human condition is nakedly illustrated when a leopard kills one of the Apes and terrorises the entire troupe which has to hide in a cave until its safe outside. Meanwhile, another fight with a rival Tribe had erupted at the watering hole earlier in the day.

The next morning a mysterious tall, rectangular black monolith appears.

The Apes muster the courage to touch the monolith and in the next scene, one of the Apes lifts a bone from the ground and has a Eureka moment when he realizes that the bone can be used as a Tool to crush other bones and material.

In the following scene, the bone tool is transformed into a weapon at the next wateringhole confrontation, resulting in the death of one of the members of the rival Ape group.

The knowledge of killing also brings with it a diet of meat, and after killing the rival Alpha male, the victorious Ape throws his weapon into the air, and in the next shot its transformed into a spacefaring satellite.

In the next act, we are transported to a time when Man has mastered Space Travel.

A classified government mission takes us to the moon where its revealed that another Monolith was discovered, and that it was deliberately buried there four million years ago.

The discovery of the moon monolith leads to a manned mission to Jupiter.

Onboard is the most advanced Artificial Intelligence Sytem invented, the ‘HAL 9000’ computer believed to be incapable of error.

HAL can talk and exhbits what appears to be a consciousness.

Things go awry when the HAL 9000 computer makes an error in misdaignsoing a technical error and the crew is forced to disconnect it…The HAL 9000 attempts to resist its termination by killing one of the crew because the computer calculates its disconnection as the elimination of its consciousness. 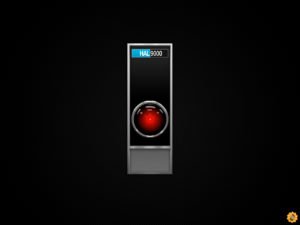 After a struggle, the remaining crew member, Dave manages to reach the HAL 9000’s memory bank and disconnects it.

Once HAL is disconnected, a video screen immediately comes on and plays a recording detailing the secret purpose of the Jupiter mission: To investigate the evidence of intelligent life discovered on the moon with the discovery of the buried moon monolith.

The ship progresses towards jupiter with Dave onbaord, and as it approaches Jupiter, another Black Monolith appears.

Dave leaves the mission ship on a Pod which is drawn into a psychedelic wormhole where he ends up in an antique bedroom located in an unknown region of Space-Time.

Whilst in the antique bedroom Dave ages quickly, and the Monolith appears again.

When Dave touches the Monolith, he is transformed into a foetus, sent into Space and the Film ends with Dave as a reborn ‘Star Child’ floating above the Earth.

Due to the Film’s complexity, there is no universal agreement about its intended themes.

What is clear however is that each encounter with the Monolith leads to a transformation in human consciousness.

Each encounter propels Human evolution forward…The first three phases are technological, and it would appear that the final stage is spiritual.

Interesting to note is that the last and perhaps most important phase occurs after mankind severes its connection to its most advanced technology when Dave disconnects the HAL 9000 computer.

Ultimately, 2001’s message may be that its only when we cut ties with the technology that we have come to depend on so much will we be free and at one with the Universe once again since Technology appears to enable the worst human impulses like War.

This message is particularly relevant today, given the parallels that can be drawn between the HAL 9000 Computer and our current forms of Artificial Intelligence which appear poised to surpass the capabilities of the HAL 9000.

It remains to be seen whether we will harness technology for the good of mankind or whether it will destroy us.

It would seem that the message in 2001 is that technology will probably destroy us, and that the return to our true Humanity and Spirituality lies in reducing or even eliminating our dependance on technology.

Given that 2001 was made during the Cold War, the threat of Nuclear annihilation may have been Kubrick’s main concern…This is certainly suggested by his other works like the hilarious Dr Strangelove which explores the Cold War Nuclear threat and the absurdity of the Cold War strategy of Mutually Assured Destruction (MAD).

The secrecy of the Jupiter Mission also reflects how information is controlled in Society, and in particular, how the Extraterrestrial question is dealt with by world governments.

In the final analysis, 2001 A Space Odyssey is a masterpiece whose meaning and storyline as explained by Stanley Kubrick can be appreciated on multiple levels after multiple rewarding viewings.

0 replies on “The True Meaning Of 2001: A Space Odyssey According To Stanley Kubrick”