King Piye, the Nubian King Of Kush from the age of African antiquity is probably the greatest and most powerful Black Pharaoh who conquered Egypt and founded the 25th Dynasty.

Piye as King of Kush and Ruler of Upper Egypt reigned from the Nubian Capital at Nappata.

During Piye’s reign, there was a period of rivalry and Religious division amongst the Rulers of Lower Egypt. To Piye this presented an opportunity for both territorrial expansion and Religious Revival.

As such, Piye the greatest and most powerful Black Nubian Pharaoh when initiated what he considered a Holy War in the name of Amun Ra, one the Founding Gods of Ancient Egypt in Pre-Historic Times with the objective of uniting Upper and Lower Egypt under the Worship of Amun based on the Memphite Theology recorded in the Shabaka Stone.

In the 20th year of his reign, the man who would become the greatest and most powerful Black Pharaoh began his expansion into Lower Egypt with Nubian power reaching as far as Thebes where he faced and defeated a coalition of Lower Egypt’s Kings after his army successfully invaded Middle and Lower Egypt.

In recognition of his status as King of both Upper and Lower Egypt, Piye attended the great Opet Festival at Thebes recording the details of His military conquest in the Piye Victory Stele: 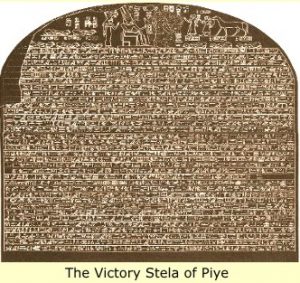 “Hear what I have done in exceeding the ancestors. I am the king, the representation of god, the living image of Atum, who issued from the womb marked as ruler, who is feared by those greater than he, [whose father] knew and whose mother perceived even in the egg that he would be ruler, the good god, beloved of the gods, the Son of Re, who acts with his two arms, Piye, beloved of Amon ….

Piye immediately returned to Nubia from where he Ruled as King of both Upper and Lower Egypt.

Ultimately, Piye’s conquest of Egypt was motivated by a Religious ideology which has been considered an African Renaissance because it was motivated by the desire to restore authentic Kemetic Civilization traditions of the Ta-Seti Culture.

Piye’s ideological stance may be understood from the Ancient Oral Tradition of the Greek Historian Theodore who suggests that the Nubians were the first to institute the worship of the Gods in Egypt.

As such, from its Capital at Nappata, Ancient Nubia remained the custodian of the original Egyptian Cult of Amun Ra.

Piye may have been driven by this Ancient narrative and saw his conquest as a means of returning all of Egypt to its most Ancient Tradition which had been lost in parts of Egypt.

The origins of the Cult of Amun Ra amongst the Kushites may possibly be explained from the Pyramid Texts at Saqqara which detail the Pre-History of Ancient Egypt from the era of the Gods.

From this History which some Historians regard as pure myth, we get a narrative that explains how the Ancient God Ptah arrived after the great flood and formed the land of Egypt which became the land of his descendants including his Sons Amun Ra (The Silent One) and Thoth who are said to have brought Civilization and Knowledge to the land and people of Khem.

From this perspective, Piye’s campaign can be understood as a Religious Crusade meant to return all of Egypt to the Ancient Religion of the Founding Gods of Egypt that was first taught to the people of Khem (Nubia) before it spread to the rest of Egypt.

Piye therefore regarded Nubia as the custodian of the true Egyptian Religion which had been first taught to the Africans of Khem.

When Piye died he was buried next to the largest Pyramid in the Royal cemetery in his Homeland of Kush which today is located in North Sudan.

Today Piye is recognized as the greatest and most powerful Black Pharaoh and ruler in Nubian history as the King that emphasised the importance of Kushite Culture to Ancient Egypt’s Traditions.

The 25th Dynasty Piye established would rejuvinate Egypt with new widespread Pyramid construction ensuring that even in its later years when Nubia no longer ruled Egypt, Piye’s influence on Ancient Egypt as the greatest Black Pharaoh would always echo across the desert sands.