Ifalakhe is a new wave Historical Fanstasy African TV series with a compelling cast of characters and storyline.

The Characters & Storyline In Ifalakhe

Ifalakhe is the name of the main character in the story told in the TV Series Ifalakhe which is set in Pre-Colonial Southern Africa.

The characters in the TV Series Ifalakhe begin their journey when an Ancestral Oracle of the Kingdom of Okuhle decrees that two of the King’s wives would each bear him a Son, but that one of them would bring destruction to the Kingdom if allowed to live.

The King is instructed to kill the last born of his Sons, but through the deception and trickery of his Principal Wife, the King is told that both were born at the same time.

As a result, the King cannot tell which of them was born first, and so the decision to allow both Sons to live which propels the drama in Ifalakhe is made.

The explosive drama is set against the background of the struggle for Power between the two main protagonist Characters in the TV Series Ifalakhe being Ifalakhe himself, who is the Legitimate King of Okuhle, and his Half-Brother Busani, the Usurper.

The Portrayal Of African Pre-Colonial Life In Ifalakhe

Ifalakhe revels in the personal and political intrigues of Pre-Colonial Africa as Ifalakhe’s cast of characters and storyline explore the drama of their African world with the same level of dexterity as classic Period Shows like Vikings and Rome.

Whilst comparisons have been made to Game Of Thrones, in my view, Ifalakhe is different because Ifalakhe’s cast of characters and storyline are more Society and History than fantasy.

Much like Vikings and Rome, in Ifalakhe, the cast of characters and storyline explore whats at stake for individuals and nations in a capitivating way without departing the realm of a core Historical reality as the contest for the Kingship unfolds, warring nations with vendettas clash and unexpected romances blossom.

In Ifalakhe, the cast of characters portray the African Psyche with depth in its Historical context with the result that the characters in Ifalakhe are completely believable as actual Africans that could have existed in an Africa now lost to the mists of time.

Furthermore, the attention to detail Ifalakhe gives to its characters in various social settings like funerals, conversations between Maidens and Suitors and Old Men of the Village sharing a Calabash of Brew at Sunset as they discuss the latest controversies in the Kingdom of Okuhle are all a sign of Ifalakhe’s committment to going beyond the typical ‘Native’ tropes that were all too common in Shaka Zulu. 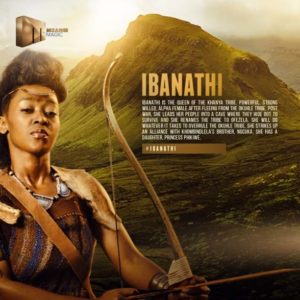 Whilst Show’s like Shaka Zulu have visited the same place before on a big Hollywood budget, in Ifalakhe the characters and storyline tackle the same subject matter more adeptly with what is a comparatively shoestring budget to create a world you will find irresistable.

The characters in Ifalakhe’s storyline are part of the re-telling of an epic African Hero’s journey like we have not seen on screen before, and my hope is that we can see more of these types of Productions.

I’m sure Mali’s Ancient Epic Of Sundiata would be equally thrilling.

Be sure to check out Ifalakhe on Showmax or on DSTV if you’re in Africa. It would be great if Netflix would also pick it up for circulation to a broader global audience.