The stories of Saartjie Baartman and Oto Benga demonstrate the inhumanity of Human Zoos.

In the later 19th to the mid 20th Century, Humans were publicly exhibited in Human Zoos throughout Europe and North America.

The ‘exhibits’ were from Colonial territories across the world and gave Europeans a window into the exotic world of Colonial adventures by purporting to show the ‘Savages’ in their natural environment.

Prior to the Human Zoos of the Colonial era, Human exhibition had been practiced throughout History particularly in the Roman Empire…An example would be Julius Caesar’s exhibition of the conquered Leader of the Gauls Vercingetorix at his famous Triumph celebration following his victory in the Gallic Wars.

Spanish and Portuguese explorers were also in the habit of bringing back plants, animals and people from the lands they traveled for exhibition at Royal Courts.

The main difference between earlier Human exhibition and the Human Zoos of the Colonial era was that the latter were for mass consumption and not restrictedÂ  to the Aristocracy.

Human Zoos were part of a broader agenda to demonstrate the success of Europe’s ‘Civilizing Mission’ as expressed in Imperialist expansion via Colonial conquest…A form of Mass Propaganda designed to legitimize Racism and Colonialism by ‘demonstrating’ both the success and necessity of the Colonial project throughout the World.

Human Zoos were by their very existence deplorable and they were some particularly notorious and scandalous exhibitions that reveal the real cruelty and tragedy of the phenomenon. 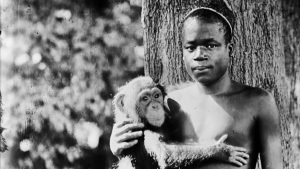 Most notably, the exhibitions of Saartjie Baartman also known as the Hottentot Venus in London and Paris from 1810-1815, and Oto Benga a Congo Pygmy featured in Human Zoos and exhibits in North America from 1904-1906.

Both lives ended in tragedy as Saartjie Baartman died sick and alone after a world famous exhibit which was popular amongst Europeans who were incredulous at the bodily features of an African woman…Eventually her remains were dissected and kept for ‘study’ in a French Museum.

Ota Benga ended up committing suicide because he simply could not be integrated into American Society and live a normal life at the end of his exhibition. His body still lies in an unmarked grave.

In the end, Human Zoos were an extension of the Racist Hegemony of the Colonial Project, and they allowed Europeans who had remained in Europe to vicariously enter the ‘Dark Continent’ and other similar places of dread and misadventure, at the same time legitimising the program of Colonial exploitation and discrimination.

The Africans that were exhibited in European and American Zoos had belonged some of the most glorious African Empires that were eventually destroyed by Colonial Conquest.