The thirst is real as the Coronavirus lockdown drags on.

In these lean times, traditional African Beer has come to the rescue, not only because it can be made at home during the lockdown, but because its always been one of the best brews out there for any beer drinker to appreciate.

Its my favourite kind of beer anyway, and I’m glad my Wife was able to whip up a batch to counter the Corona thirst.

Beer itself has always served an important Social function in African Culture where its called by many different names  like utshwala, umqombothi, masese, pito, doro, chibuku, mtamo and joala across a wide range of African Cultures.

Fermented Sorghum is the main ingredient, and the Beer is used as both food and an intoxicating beverage during important social, cultural and religious ceremonies.

Ceremonially Beer has been used as an Offering to the Ancestors and its social uses enhance family and community bonds. In addition, Beer has served as a currency for payment of goods and services within African communities.

The brewing of Traditional African Beer was the preserve of women who used a variety of specially designed Clay Pots for the fermentation process. 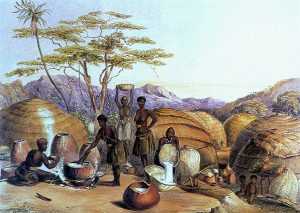 One large Main Clay Pot was traditionally used, supplemented by a variety of smaller sized Pots used for brewing, serving and drinking.

Baskets, Calabashes and reed grass strainers were also used in the preparation, storage and serving of Traditional African Beer.

In recent times, Commercially prepared Traditional Beers have for the most part replaced the traditional variety in urban areas, but its great to know that one can always make their own unique Brew at home and also get in the rural areas.

Today as in the past, there are many ways to make an African brew, and the video is an example of one method out of many.