The History of Erotica begins in the Ancient World.

Amongst the finds was the shocking statue of the Roman God Pan having intercouse with a female goat.

Subsequent discoveries continued to challenge Victorian notions and sensibilities about morality in antiquity.

Such discoveries were made in Mesopotamia, Greece, Egypt and off course India with the Kama Sutra.

In Mesopotamia votive figures showing sexual penetration were common and it is thought that a significant number of them were used in ritual Sex at the Temple of Inanna, the Goddess of Fertility.

Egyptian Erotica on the other hand did not reach the level of high art and was usually in the form of graffiti, mainly for pure entertainment and amusement.

Greek Erotica was quite advanced where it appeared on painted pottery and ceramics depicting sexual scenes from everyday life.

Erotica in the Ancient world was not regarded as subversive because sexuality was embraced as a normal element of everyday life which could be expressed in Art.

As such, Erotica in the Ancient world did not bear the stigma of the label ‘Pornography’ which was not a concept that existed at the time because sex was not treated as taboo.

The Victorian era invented the term ‘Pornography’ by banning or restricting access to Erotica which was treated as immoral presumably because it appealed to the more ‘base’ instincts of man.

This was the complete opposite in the Ancient world where sexual desire was regarded as a normal and necessary part of enjoying a fullfilling life, particularly in marriage.

For this reason, Erotica could be publicly displayed and its uses went beyond mere physical sexual gratification.

Erotica has thus been part of Civilization from the earliest Cultures, and its presence from the Ancient World has carried on.

It would be the invention of the Printing Press that would lead to a revolution in its distribution and social functions as Photography would become instrumental in the Enlightenment era, serving as a means to attack the Nobility and transform Society in the French Revolution.

The tradition and culture of Erotica from the Ancient world continued into the Middle Ages right up to the Renaissance.

The arrival of the printing press would make Erotica more widely available to the public, and this in turn would make it useful as Propaganda in the Renaissance wars against Europe’s Noble establishment.

In the Medieval period handmade books were extremely expensive.

For this reason, to get value for their money, people who commissioned Books endeavoured to make Books as engaging as possible which meant they would frequently request that sexual illustrations be included in the Books. 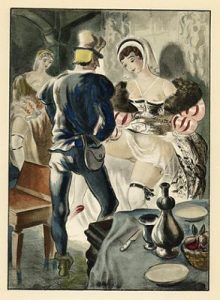 These sexual references were in the form of subtle illustrations embedded in the main text usually in the margins, and can even be found in the earliest Bibles.

With the invention of the Printing Press however, Pornographic Prints became widely available and popular in Europe, and during the Enlightenment, French free thinkers realised their potential to critique the Nobility and began using pornography as a medium of Political Satire.

The Catholic Church was frequently targeted as the drawings showed Priests, nuns and monks in uncompromising positions.

In the end, this type of Political Pornography robbed the Monarchy of its allure and mystique, causing a public psychological shift in the perception of the Monarchy that made the French Revolution as a Mass Movement possible.

120 Days of Sodom is a depraved novel set in the remote medieval castle, Château de Silling, at the end of King Louis XIV’s reign when 4 rich male Libertines, namely, the Bishop, Durcet, Blangis and Curval decide to seclude themselves for 4 weeks between November-March so they can experience the ultimate sexual pleasures engaging in unspeakable acts of sadism, torture and murder with thirty six teenage males and females.

The book was declared a National Treasure by the French Government in 2017, and remains a shocking example of sadistic Pornography which is perhaps now viewed as a form Libertine evil genius.

With the Priniting Press, the Middle Ages and Renaissance period demonstrated the impact technologyhad on the distribution of Pornography, and its potential to influence Human behaviour on a mass scale.

During this period, Pornography served simulatenously as a gateway to individual physical pleasure and a Social Revolution that ushered in the liberal era of today.

The camera lens had its own unique impact on Erotica.

In particular, pioneering Photographer Louis Daguerre developed a technique for producing what became known as daguerreotypes which were photographic prints with more lasting detail and quality.

Photographers quickly used this new technique in nude photography, developing the depiction of the female form from the idealised painted version of the renaissance to the grittier and more naturalistic portrayal photography allowed.

Although daguerreotypes enabled Pornography to break new ground, they were costly and time-consuming to produce.

As a result, they could not be made available on a mass scale.

This problem was solved by the development of the Calotype procedure which produced Photographs from a negative print.

In 1880, halftone printing arrived which made it easy to print photos in black and white.

In the 1940s “pinups” arrived with an initial focus on legs, followed by breasts in the 50s introducing pinup legends like Marilyn Monroe, one of the world’s first popular pin up girls.

In the late 1960s, magazines became more explicit by focusing on the buttocks.

In the final analysis, its safe to safe to say, Photography birthed Pornography as we understand it in its modern form.

Nevertheless, Video technology would also see Pornography exploring new territory including a brief stint as legitimate Cinema until VHS videotape technology allowed it to penetrate the privacy of the individual home. 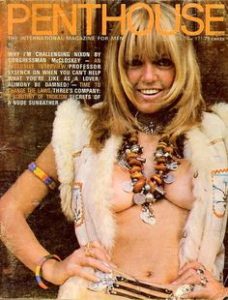 These films were deemed unlawful and censorship Laws meant that Stag films were an underground movement which continued well after World War 2 when the movies were exchanged privately and clandestine viewing events were held.

From the early 1980s, many pornographic films were being shot straight to video.

Although the industry initially tried to resist the shift to video because of its ambitions in Cinema, the affordability, privacy and revenued offered by Videotape resulted in a shift to video.

This moved Pornographic films from Theaters into people’s homes on a mass scale.

The industry enjoyed massive success during the video era, but changes in technology would once again impact the industry when digital technology arrived.

Today, we live in a world where digital Pornography is ubiquitous, and perhaps Porn’s constant presence in Culture and Civilization from the earliest Civilizations suggests that even though attitudes and conceptions of sexual mores may change with time, human sexual desire will always find an outlet.