The African origin of the Pre-Colonial monument Great Zimbabwe has been accepted since 1929 following the excavation of the site by Gertrude Caton-Thompson.

Nevertheless, there have been alternative  theories about Great Zimbabwe linking it to the Queen of Sheba, the Phoenicians (Arabs) and Ancient Alien Astronauts known as The Anunnaki.

Whilst I had no doubt that the mainstream view on this issue was probably based on good evidence, I decided to investigate for myself exactly why these alternative theories were raised in the first place.

Were they driven purely by Racism in a bid to deny Africans their rightful contribution to world civilization or was there something else behind these findings that does not fit in line with the mainstream perspective?

In search of answers, I visited Zimbabwe’s National Archives and reviewed the earliest archaeological findings, academic papers and discussions on the Great Zimbabwe site.

I also considered the arguments made in modern Alternative Theories like the Ancient Astronaut Theory applied to interpreting the Great Zimbabwe site, most notably by Erich Von Daniken and Michael Tellinger.

Background Of Research Into The Origins Of Great Zimbabwe

Some background into the history of the research on the origins of Great Zimbabwe shows that there has always been controversy regarding Great Zimbabwe.

Discovered first by Karl Mauch in 1867, he concluded that the Site was linked to the Queen of Sheba and King Solomon’s Mines.

This was followed by Theodore Bent’s “The Origins Of Great Zimbabwe And The Race That Built Them’ which I managed to read in its entirety.

In 1892 Bent concluded that the Site showed some Arab and Phoenician influences showing similarities with near Eastern Temples, particularly the Conical Tower which was a common feature in Temples of the Near East.

The 1929 excavation carried out by Gertrude Caton-Thompson dismissed the earlier conclusions about the site and determined conclusively that the Great Zimbabwe site was inhabited and built by Africans because evidence of African habitation was present in every layer.

Since then later research has found Chinese, Persian and Syrian artefacts dating back to the 12th and 15th Century.

There has also been a surge in modern alternative theories first proposed by Erich Von Daniken and Michael Tellinger suggesting that Great Zimbabwe is an Ancient Alien site, namely the Lost City of Enki in the Abzu referred to in the Sumerian Texts.

Its even been suggested that the Genetic engineering labs where mankind was created in the Sumerian Records were actually at Great Zimbabwe because that was Enki’s base, the Creator of Mankind.

Despite these alternative theories, it would seem that based on Archaeological evidence, the question of Great Zimbabwe’s African origins is already settled, but in my view, there are still some unanswered questions about the Great Zimbabwe site.

The main mysteries relate to the dimensions and purpose of the Great Temple as well as the mysterious Zimbabwe Soapstone Birds.

Both these mysteries suggest Great Zimbabwe’s links to another more Ancient Culture. 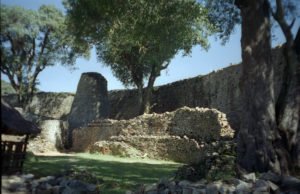 What is striking about the Great Temple is the use of Phi (3.14) in its construction as well as its astronomical alignment.

For instance, the ratio of Phi was used to proportion the Two towers, the Great Central Enclosure as well as the Outer and Curved Inner walls.

This ratio can be found by measuring the diameter of the Great Tower which is equally proportional to the circumference of the smaller Tower by a Ratio of 3.14.

This ratio provides a ‘key’ for decoding and understanding the construction of the entire site which follows this ratio in constructing the main structures of the site.

In addition, the Towers and the site are oriented to face and observe the Stars in the Northern Constellation.

This is intriguing because it mirrors the same technique based on Phi used in the construction of the Giza Pyramids, and which is responsible for their Architectural precision.

Thus the Soapstone Birds are similar to the Vulture or Bird symbol found in Egypt.

The enigma of the Zimbabwe Birds once again suggests Great Zimbabwe’s link to Egypt especially since it shows a River and a Crocodile below the Bird.

The crocodile is also a symbol of the Egyptian Kemetic Neter Deity Sobek.

Both these Deities were adopted as Totems by the African inhabitants of Great Zimbabwe.

Historically, the Mathematics used to build the Great Tower and the Iconography of the Zimbabwe Bird were both developed in Ancient Egypt (Kemet) when the Pyramids were built circa 2 500BCE.

As such, the knowledge of Phi used to build Great Zimbabwe as well as the Zimbabwe Bird may be proof of the Nile Valley Legacy and Egyptian Kemetic influence on the development of Civilization in the African interior.

The precedent for contact between Egyptians and other Africans is also demonstrated by Mali’s Dogon Tribe whose knowledge of the Sirius Star system can also be regarded as part of the legacy of the Nile Valley since these Star Religion teachings already existed in Ancient Egypt as shown by the Dendera Zodiac. 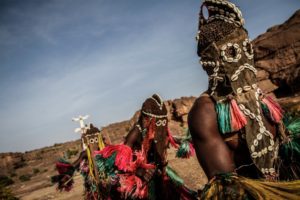 Ultimately, given the African character of Egyptian Kemetic Civilization from the earliest days of Ta-Seti circa 3 800 BCE, it may be worthwhile exploring the Egyptian origins of Great Zimbabwe by examining possible links to the more Ancient African Kemetic Nile Valley Civilization in Egypt (Kemet) and Nubia which historically filtered into the African interior and elsewhere around the world providing a model for world civilization that dates back to Africa’s forgotten history in Antiquity.

At the end of the day, my trip to the National Archives was very satisfying.

I’ve now also added a gallery of the photos I managed to get of some of the excavation findings.