“Glad you’re back Major!!” Dimpho greeted Tindo enthusiastically as he walked into the main Control Room at the Citadel.

‘Its definetely good to be back’, Tindo responded feigning enthusiasm as he took his seat at the Central Command Console in the Citadel Control Room.

After reviewing Dimpho’s Status reports which were immaculate, Tindo abruptly announced that he would be making his way to the Conference Chamber to update Timati and the Citadel Leadership on the outcome of his mission to Lamu.

Riddled with anxiety, He couldn’t even remember how he got to the Conference Chamber, but he was soon joined by Timati, Dzimba and the Juluka Lord Bindu via an Intergalactic feed.

‘Did you bring the Federation Planets in line so we can finally put a stop to this nonsense on the Outer Planets’, Timati began the proceedings with characteristic hubris.

Tindo thought it would be best to proceed in a diplomatic but firm tone.

‘Well it looks like we may have some problems out there. We received some genuine complaints that I think are worthy of your attention and critical to resolving the problem…”

‘Genuine Complaints! Did I hear you correctly?!”, Lord Bindu interjected before Tindo could even finish.

‘There are no ‘genuine complaints’, the problem lies solely with you as our Representative. You have failed us, and I can only conclude that you are a Traitor to the Federation.

Arrest him immediately!! We will find other ways of dealing with the disobedience on the Outer Planets”, Lord Bindu continued in a menacing and explosive tone.

Tindo stood non-plussed as he was swiftly arrested, taken into custody and led to the notorious El Mina Dungeon by the Citadel Guards in the room.

‘I am authorising a punitive force to be sent out to deal with the Rebels on the Federation Planets. You and Dzimba will be in charge of the operation, and I expect nothing less than total annihilation of the Federation Rebels, but firstly, we need to teach this Traitor a lesson.

He needs to understand the cost of betraying the Federation. Send a Termination Team to his Hive to deal with his Mate and Seed. In the meantime, I want a status report on the punitive force we are dispatching by the end of the day.’

Lord Bindu’s commands were swift, cold and unwavering, leaving Dzimba and Timati with no alternative except to expeditiously comply.

In that instant both knew that their own positions in the Citadel Leadership had just become precarious.

By the end of the day, Tindo had not come out of the Status Report meeting, and Juju was getting worried. In addition, he could observe the flurry of activity indicating that the Citadel Leadership was hurriedly preparing a Military Expedition.

There was no record of any planned expedition in the Citadel Records to which they had access , and Juju began to wonder whether these developments had anything to do with Tindo’s report to the Council.

Whilst on Lamu, Juju had held separate discussions with some of the leaders of the Federation Planets, and they had given a Comms Device with which he could make direct contact with Inoza on Lamu in the event that things didnt go as planned when they returned to Kingu.

Without further hesitation, Juju discreetly made contact with Inoza on Lamu and informed her of the disturbing turn of events on Kingu.

“So its come to this”, Tindo muttered to himself as he stood alone, dejected and confused in a corner of the notorious El Mina Dungeon. He never thought he would find himself here after so many Mbire Cycles of loyal service to the Kingu Federation.

The entire situation was surreal, and in that moment he understood why Juju was suspicious of the entire Lamu mission from the outset. His thoughts drifted to Sikhathele and Runya as he desprately wondered whether he would ever see them again.

Suddenly, a blinding light shone through as the entire Citadel Complex shook and then the Dungeon walls and part of the roof collapsed under the force of what seemed like a directed High Frequency Sonic beam.

The Citadel Complex was under attack.

As quickly as the attack came, a ladder was stretched out to him from what appeared to be a Ballistic Capsule hovering  above the rubble of the El Mina Dungeon Roof. Tindo climbed up the ladder and soon found himself sitting beside Inoza, Juju and the mysterious young woman he had just seen giving a rousing speech outside the Citadel Complex.

‘Set course for the Outer Badlands beyond the Zig Ore fields!’ The mysterious young woman yelled to Inoza and Juju in an impelling tone.

The Capsule rose above the Citadel Complex, and after releasing another High Frequency Sonic beam to ward off gathering Citadel Defence Forces, the Capsule made off into the distance after engaging the Nutrino Boost.

The Capsule soon arrived at the Mwari Cult Base where a landing a dock opened from beneath the ground and they were safely docked.

The mysterious young woman took on the responsibility of explaining things to a shell shocked Tindo.

‘Quick to the Stargate, there’s no time to explain. Understand that it is time to embrace your true destiny and to learn what you will need to do to deliver the entire Federation from the Yoke of the Juluka.

You are The Neta, the one elected to free our people and bring back the olden ways. But you will have to spend some time re-awakening yourself in the ways of Old, and that is why you will enter the Stargate which will take you to the past’.

‘But what about my family?! I can’t just leave!!!’, Tindo protested.

‘We are sorry to tell you but your Wife and daughter were killed by a Juluka Termination squad while you were in El Mina Dungeon. This may be hard for you to accept now, but I promise you that all will be revealed and explained.

The Ancestors do not leave injustices unpunished.‘

Tindo stood there even more incredulous as it dawned on him just exactly how bizarre and macabre things had become in the short space of time he had returned to Kingu from Lamu.

At that point, believing what he was being told by the strange young woman and stepping into the Stargate seemed like just another natural step in the phantasmagoric sequence of events that now seemed to make up his life.

He looked at both Juju and Inoza who both reciprocated with a sympathetic and reassuring gaze.

‘Here, hold my hand. We’ll walk through together’, the strange young woman attempted to reassure Tindo.

Tindo held the strange young Woman’s hand and walked into the Stargate which was inside the mouth of the Mwari Cult Statue at the Centre of the hidden Mwari Cult Complex.

In an instant, Tindo found himself in the middle of a City that seemed more advanced and resplendent than any of the Cities he had seen in the Kingu Federation.

‘Are you sure we’re in the past?’ Tindo turned to the strange young woman who had accompanied him in the crossing.

‘Yes we are, in fact, we are on Planet Kingu known as the land of Kem 10 000 Mbire Cycles before the arrival of the Juluka when the Anu built the first Civilization that would give birth to the Akan and all the other nations of the Federation Planets.

I am taking you to the Lodge where you will undergo your Initiation in the wisdom of the Metju Natcher’. 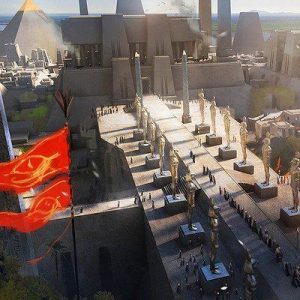 End Of Book 1: The Gods Of Juluka

Next Book 2: The Initiate.

The Bikini: A Brief History