At 12000 years, Gobekli Tepe is the oldest known stone ruins whose builders are unknown. Excavations at Gobekli Tepe point to the possibility that the builders of Gobekli Tepe may have been the Native inhabitants, the Denisovans or the Anunnaki Ancient Astronaut Aliens.

Located in Turkey, Gobekli Tepe is a vast Stone Temple building. However, unlike Sumerian or Ancient Egyptian Temples, there is no writing from where we can determine who built Gobekli Tepe or what the purpose of Gobekli Tepe may have been.

Instead, we have a Stone alignment and a series of symbolic inscriptions which suggest the existence of an Astronomy based Religion. In addition, Gobekli Tepe’s alignment to the Cygnus constellation as a means of marking the Precession of the Equinoxes in Ancient times has been proposed by Andrew Collins and Graham Hancock.

Stone inscriptions at Gobekli Tepe also bear a close resemblance to the symbols that would be used later in Sumerian, Indus Valley, Egyptian  and Mesoamerican Temples.

The Unknown Builders Of Gobekli Tepe


According to Andrew Collins and Graham Hancock, the builders of Gobekli Tepe were possibly the Denisovans, a now extinct Giant Humanoid hybrid species of superior size and intelligence.

On this view, the builders of Gobekli Tepe may have been the survivors of the great deluge, who established Gobekli Tepe in order to preserve and transmit pre-flood knowledge and culture.

It has also been argued that Gobekli Tepe was built by the local Native Tribes who built the site in Ancient times together with the NAZCA lines using stone tools.

The identity of the builders of Gobekli Tepe remains an enigma, and it is from its influence on later cultures that perhaps we may obtain some idea as to who is responsible for building Gobekli Tepe.


One of the clues as to who built Gobleki Tepe is the evidence from the symbols used at Gobekli Tepe that also show up in the later Civilizations of Sumeria, Egypt, the Indus Valley and Mesoamerica.

In particular, the symbols and astronomical alignments first seen at Gobleki Tepe are used in these same later Civilizations, forming the foundation of these Civilizations by introducing concepts like Time, Temple Construction and Religious worship of the Gods.

It would seem the Gobekli Tepe provided a kind of ancient template upon which later Civilizations were built.

As such, the Ancient Gods who built Gobekli Tepe and other later Civilizations in these various regions may in-fact be Giant Hybrid Denovisans rather than Ancient Astronauts as suggested by Zechariah Sitchin.

The earliest depictions of the builders of Gobleki Tepe may possibly be of the Serpent figures of the Ubaid Culture which may be seen as portrayals of Denivosan Giants rather than Alien beings.

Gobekli Tepe culture may have therefore spread and established itself in the Ubaid Region first, then onto Sumer, Egypt, the Indus Valley and Mesoamerica. 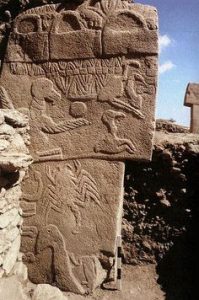 The Giant skeletons that have been unearthed throughout the world and remain unexplained by mainstream Archaeology may belong to the builders of Gobekli Tepe, a Race of Denovisan Hybrid Giants who initiated all subsequent Cultures into Civilization.

Excavation of the Gobekli Tepe site still continues, and perhaps more revelations will provide clarity as to its purpose, origins, builders and influence on later Civilizations.