Released in February 2000, I first listened to ‘Supreme Clientele’ in my Varsity days.

In my view, this album belongs in the Top 10 List of Hip Hop albums of all time.

A phenomenal classic thats definetely stood the test of time.

Its difficult to explain why this album deserves its cult classic status because on the surface this album’s lyrics sound meaningless.

No high minded Social awareness or even obvious punchline rapping is apparent. So listening to it for the first or even multiple times you can literally scratch your head.

“This is where Ghostface starting to get real poetic and say the most random stuff (but sounding so ill at it), lots of his rhymes don’t make much sense but he’s so confident with his rapping that he makes it look like he’s got his own language…..”

I couldn’t have said it any better, and therein lies the Genius of this album because it rewards the attentive listener.

To grasp the lyrical Wizardy Ghost is displaying here we need to go back to the literary concept of “Stream of Consciousness”.

In literary criticism, stream of consciousness, also known as interior monologue, is a narrative mode that depicts thoughts and feelings in realtime as they float in and out of the mind.

Stream of Consciousness was made famous by the Irish Author James Joyce in his masterpiece “Ulysses”.

“Supreme Clientele” is what Stream Of Consciousness feels and sounds like in Rap format.

At first blush, the rhymes seem incoherent but there’s actually a lot going on.

These rhymes taken from ‘Mighty Healthy can hopefully illustrate the genius of this album .

“Wooly Hair, eyes fiery red, feet made of brass/
12 Men following me, it be the God Staff..”

In a few words Ghost lets us know his lyrics represent the second coming of Christ. 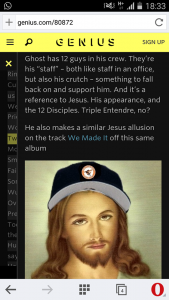 Next up is my  fav line off the album and possibly of all time:

Yes, thats Ghostface’s one-liner for breaking the ice with the ladies, and letting them know he wants to make babies.

The album is replete with such moments of incandescent lyrical brilliance, with the art of MCiing on full display.

Ghost invented a completely new style on this album because he wanted to be the best MC with a style Biters could not touch.

So once again he lets Vampire copycat Rappers know that stealing his lines is toxic :

“Rhymes is made of garlic”.

The Outro is also well placed as a Kungfu Master advises his Student that the secret to mastering your skills is breath control.

Again Ghost drops a gem for all MCees truly interested in the Art if they aspire to reach his level.

After the lyrical expo he’s just exhibited on the album, his advice should be taken seriously.

All in all, I really enjoyed this album, and it reminded me of why I fell in love with Hip Hop in the first place.

Creativity, originality and competitiveness through lyrical dexterity are all evident in abundance on ‘Supreme Clientele’ .

Its also no surprise that this album influenced Jay-Z and his cohort of Producers when they recorded the first “Blueprint”.

Both Kanye West and Just Blaze admitted to having Ghostface in mind as the man to beat when crafting the powerful sonic signature that became the Jay-Z classic we’ve all come to love.

“Supreme Clientele” is where it all started.

Give this album a spin, you wont regret it.

From the beats to the lyrics, its really an extravagant exhibition of Hip Hop as an Artform.