Cuties (Mignonnes in French) is a 2020 coming of age drama film by Maïmouna Doucouré.

It has sparked a lot  controversy and ignited uncomfortable conversations. This was largely fuelled by the marketing campaign strategy Netflix used to draw viewers.

Cuties(Mignonnes) is an African narrative, particularly that of an african immigrant family.

Fathia Youssouf who acts as the main character Amy, is an 11 year-old child from a Senegalese Muslim family.  She is living in France as a second generation immigrant, navigating two  cultures, Senegalese and French.

Identity and the Intersectionality of diverse cultures

In Cuties (Mignonnes), family dynamics are a source of unhappiness for Amy.

She begins to explore her angst as she buds towards young adulthood. Frustrated by an absent father and her mother’s apparent meekness.

Mariam, Amy’s mother unhappily  accepts a polygamous  marriage when her husband decides to take on a second wife without her consent. 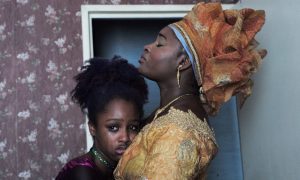 In search of her own identity, and rebelling from her conservative, oppressive culture in her view, Amy befriends an eccentric group of girls her age.

Maïmouna Doucouré’s nuanced complex narrative dramatically tranforms Amy from a shy, reserved and self-conscious girl into a radical, sexualised girl who uses social media to feed into the attention.

In formulating a sense of self Amy struggles in ‘fitting in’ with both her Senegalese Muslim and French cultures.

Doucouré s draws on her own experiences as an immigrant within a hegemonic French culture. She critics the toxicity found in both traditional african culture and the western culture.

Doucouré  also challenges dominating cultures like Europe-American to be more critical of their own narratives on issues of  freedom, individualist self-expression and the advancement of “civilisation”.

Dominating cultures naturally assume superiority over other cultures and usually believe it’s ways are ‘better’ . This often results in unintended consequences and or resistance/rejection to hegemonic ideals.

Amy is still a child irrespective of the adult behaviour she tries to exhibit. Society is filled with many Amy’s who are ill-equiped to deal with the complexities of being a young girl in today’s world of techonology at the intersection of diverse cultures.

The role models young girls look up to  are mostly based on superficial , sexualised aspirations which can be demeaning to women.  This is one of the difficult conversations the writer/director of Cuties is challenging parents, caregivers and the world to pay attention to.

How do young people build self-esteem in a social media dominated world?

Culture is fluid, for immigrants there are alot of unspoken gains and losses as one tries to assimilate into new hegemonic cultures whilst holding on to their own cultures, languages and belief systems. It can be an extremely alienating, lonely experience for both children and adults.

The world is quick to judge, lash out, without taking time to understand. Being an immigrant or a minority within a dominating culture we often experience disconnect and alienation.

The collective burden of the human condition is to try and understand first these diverse narratives without putting one own’s personal feelings at the centre.

They are  complexities of immigrants’  lived experiences situated in the homes they grieve and leave behind and the homes they build in new countries. Generations to come like Amy carry this legacy with them and the struggle within remains real.

I must say the  film Cuties had some parts I found difficult to watch.

My mind struggled to process the sexualisation of such young people. The idea that this is a possible reality in the world petrifies me!

l had to go beyond my own discomfort to understand.  In my personal view this is a brilliant film that is also very relevant today as more diverse cultures continue to intersect.

Netflix needs to apologise to Writer/Director Maïmouna Doucouré, not just for show and publicity.

In ending, below is an extract from an opinion piece written by the Writer/Director of Cuties (Mignonnes) explaining why she wrote, directed and produced this important film.

This film is my own story. All my life, I have juggled two cultures: Senegalese and French. As a result, people often ask me about the oppression of women in more traditional societies. And I always ask: But isn’t the objectification of women’s bodies in Western Europe and the United States another kind of oppression? When girls feel so judged at such a young age, how much freedom will they ever truly have in life?