Africa is important to the world because Africa has always played an important role throughout world History as the birthplace of mankind, the place from which mankind spread to populate the rest of the world, and finally in the establishment of the world’s first Civilization.

We will consider why Africa is important to the World by looking at the History of Africa in 3 periods:

i) Africa In Antiquity;

Desertification Of The Sahara

In understanding the importance of Africa to the world, it is important to appreciate the significance of the desertification of the Sahara Desert in world History.

The Sahara Desert once supported life when it was rich in vegetation and animal life.

The story of how the fertile green Sahara supported vegetation and animal life became a desert spans 40 million years.

In that time, the green Sahara lost its vegetation and animal life, transforming from Ocean to desert.

The history of how the fertile green Sahara lost its vegetation and animal life to become the barren Sahara Desert dates back to about 40 million years ago when the Northern tip of Africa was submerged in an Ocean.

Fossils of whales and seashells discovered in the Sahara Desert from this period suggest that the Sahara supported life when it formed part of a fertile green seabed full of vegetation and animal life.

Then about 3 million years ago, the Ocean water levels fell, and the Sahara Desert landscape emerged which lasted until 90 000 years ago when a shift in the Earth’s tilt would turn the Sahara green once again to enable it to support vegetation and animal life.

At this point, great lakes which would later form the great Lakes of East Africa like Lake Tanganyika were formed as the environment also shifted and a Savannah landscape that could support vegetation and animal life emerged from the fertile green Sahara.

This period also marked the establishment of a pattern in the Earth’s tilt that would shift the Sahara Climate from fertile green to desert every 20 000 years, and its also in this period that traces of Cave Paintings by early Hunter Gatherers whose lives were supported by the vegetation and animal life in the Sahara Desert region.

The rise of Grimaldi Man after the desertification of the Sahara is the next critical development that demonstrates the importance of Africa to the world.

Grimaldi Man refers to the Black Africans who first migrated to Europe and the rest of the world after the evolution of Modern Man on the African Plains according to the Out Of Africa Theory.

The story of mankind’s evolution in Africa before Grimaldi Man migrated to Europe and the rest of the world was illuminated during the 1920s following the discovery of the remains of the Hominid Australopithecus by Raymond Dart whose discovery suggested the presence of a distinct Bi-Pedal Hominid in Africa about 3 million Years ago.

Their discoveries suggested the existence of a gradual evolution of Hominids on the African Plains, most notably, Austrolopethicus, followed by Homo Erectus about 1.9 million years ago, and then to modern man, Homo Sapien who emerged approximately 40 000 years ago.

It was also established that Homo Sapiens (Grimaldi Man) had spread across the African Continent all the way to the African Savannah.

From The African Plains To Colonising The World

According to Dr. Stephen Oppenheimer, a geneticist at Oxford College, its clear that based on DNA evidence, modern Europeans all originate from Grimaldi Africans who existed in Pre-Colonial Africa.

This means that Africa is important to the world because the world’s Human Population originated from Grimaldi Man in Africa.

Evidence of Grimaldi Man’s life during the Stone Age on the African Plains has been found in Archaeological remains such as Bone Fragments, Stone Tools and Rock Art.

Grimaldi Man’s life was a life of Hunting and Gathering in which Stone Tools were forged and used.

In Africa, Grimaldi Man had already developed Artistic expression as evident in the Rock Paintings which also served a kind of Historical Record of the life and culture of the life of early Grimaldi Man on the African Plains.

However, between 70,000 and 100,000 years ago, Grimaldi Man began moving from the African continent into Europe and Asia, and  eventually, Grimaldi Man would reach as far as Australia.

About 10 000-12 000 years ago during the Pleistocene Ice Age, a land bridge also connected Asia and North America (Alaska), and its widely accepted that Grimaldi Khoisan Man crossed this land bridge from Asia into North and then South America. 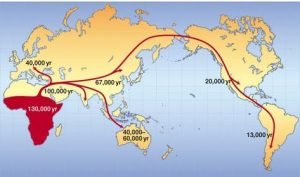 At some point about 45,000 B.C, the Glacial Ice Sheets that covered most of Europe, began to melt and groups of Grimaldi Khoisan African peoples crossed into Europe via the Gibraltar Straits where they reached as far as Siberia.

When Grimaldi Man entered Europe, he encountered Neanderthal man who had migrated to Europe thousands of years earlier, and had become physically adapted to the cold, and it is generally believed that there was some crossbreeding between them.

The Grimaldi African Man is recognised for developing a significant culture in Europe known as Paleolithic Cave Art which spread across Europe, from the Urals to the Iberian Peninsula, from 35,000 to 11,000 BC.

Grimaldi Man migrated out of the Sahara Desert to create the Nile Valley Civilization which also demonstrates the importance of Africa to the world because Africa is the place where Civilization started.

The Ta-Seti Civilization Of The Nile Valley

According to Egyptologist Dr Yosef Ben-Jochannan and Historians like Cheikh Anta Diop, and Dr Anthony Browder, the Nile Valley is the Cradle of Civilization because of its contributions to World Civilization by founding the Kemetic Civilization possibly going back to at least 5000 BC in Pre-Colonial Africa.

The area known as the Great Lakes region of East Africa contributed to world Civilization when it spawned what has been termed the Nile Valley Civilization.

Historically, it makes sense that the Nile Valley would be the Cradle of Civilization since the earliest traces of modern Man coupled with Agriculture and Iron have been found in East Africa’s Great Lakes Region.

Depending on the climatic conditions, either Crop Farming, Animal Husbandry or both were taken by the African or Bantu Peoples who had migrated from the Nile Valley and adapted to their new environment using techniques that had initially been developed in the Early African Nile Valley Civilization culture settlements. 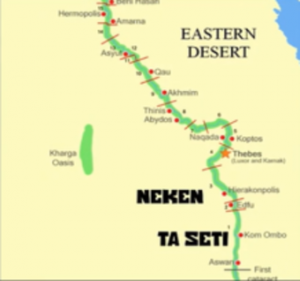 The importance of Africa to the world also comes from the fact that the Egyptian Civilization began in Africa.

The Historical origins of Egypt/Kemet lie in Ta-Seti  with its origins in the Nile Valley.

The Unification Of Upper and Lower Egypt That Created Kemet

Historical artefacts such as the Narmer Palette suggest that by 3300-3500 BC the Egyptian Kemetic Civilization with its beginnings at Ta-Seti had led to the creation of a Unified Northern and Southern Egypt called Kemet.

After the unification of Upper and Lower Egypt to form Kemet, the Nome of Memphis was established as the first Nome of Kemet to serve as a defensive colony to protect the interior from invasion.

Kemet then extended its Nomes (Provinces) into the Delta and all the way into the Meditterenean under Pharaoh Thutmose III in the period during when the Egyptian Kemetic Civilization reached its greatest territorial extent.

i)  Egyptian Kemetic Theology of Creation found in the Ennead of Heliopolis and the Memphite Theology;

iv) Funerary Texts such as the Egyptian Book of the Dead which spoke to the afterlife.

As a result, one of the most important Historical legacies of Egyptian Kemetic Civilization is Egyptian Kemetic Spirituality whose teachings such as the 42 Laws Of Maat have formed the ethical basis for Greek Philosophy and the world’s major Western Religions like Judaism, Christianity and Islam.

On the basis of the above, Africa is important to the world because it provided the basis for the world’s major religions.

The importance of Africa to the world is also evident in the fact that Africa interacted with and influenced the development of other Civilizations worldwide as shown by the Persian, Greek and Roman interactions and conquest of Egypt.

The History and importance of Ancient Roman Africa begins in 146 BC when the Roman territory of Africa Proconsularis was established on the North African Coast after the Roman conquest of Carthage in the Third Punic War.

The initial area of Roman Africa encompassed the region of East Algeria, present-day Tunisia and the Western Libyan coast.

In 27 BC, when the Roman Republic became an Empire, Roman Africa became an undisturbed Imperial possession until the Fifth Century when Roman Africa was invaded by Germanic Tribes who had infiltrated North Africa from Spain beginning in 429 AD.

Roman Africa thrived to such an extent that the Eastern Roman Empire once considered moving its Capital from Constantinople to Carthage.

However, in 698 Arab Umayyad forces from Egypt sacked Carthage and ended Roman control in North Africa. 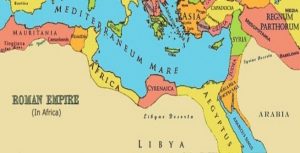 As a result, the Capital of Christianity was shifted to Eastern Europe, and the Church of the Hagia Sophia was built as the new Christian Base of the Eastern Roman Empire which included Roman Africa.

Roman Africa especially Egypt was central to the development of Christian Theological Doctrine because it was one of the Official Administrative and Theological Seats of the Eastern Roman Church with representatives at the Hagia Sophia.

Roman Africa is therefore important for its role in world History and civilization especially with regard to the survival of Christianity after the fall of the Western Roman Empire, the Crusades and the rise of Islam which were all forged in the crucible of the Byzantine Eastern Roman Empire which included Roman Africa.

Roman Africa is also important because it contributed to cultural diffusion in Ancient Times as Africans became part of the social and economic fabric of the Roman Empire.

The Arab Conquest Of North Africa

During the seventh century Arabs successfully conquered North Africa by displacing the Romans.

The collapse of Roman control in North Africa after the Arab conquest of Egypt led to a period of Arab-African Trade relations in Africa which included the Trans-Saharan Slave Trade and the East African Arab Slave Trade between African Kingdoms descended from the Nile Valley Civilization and the Muslim Arab conquerors who had displaced the Romans in Africa.

African Kingdoms that benefited from this Slave Trade included the Songhai (Mali) and the Asante Empire.

In addition, the Arab conquest of North Africa introduced Islam into Africa.

Based on the above, Africa is important to the world because Africa’s relationships and interactions with other Ancient world powers helped to shape the Ancient World.

Africa is important to the world because of its role in the Slave Trade and how it shaped the modern world.

The East African Arab Slave Trade, the Trans-Saharan Slave Trade and the Transatlantic Slave Trade were all conducted in Africa and have been important in shaping the modern world.

The Trade between Africans and Arabs in Africa after the end of Roman influence also shows the importance of Africa to the world because it led to the rise of a number of powerful independent African Empires that traded with other European powers such as the Portuguese.

Some of these important Africa Empires are:

i) The Songhai Empire;

ii) The Kingdom Of Mapungubwe;

The above demonstrates Africa’s importance to the world through the development of independent African Empires and Kingdoms that traded with the rest of the world before the establishment of Colonial rule in Africa.

Africa is important to the world because Africa was the place where a significant number of events that affected world history occured starting with the birth of mankind, the spread of mankind, the establishment of Civilization and ultimately independent Kingdoms that traded with the rest of the world on equal terms before the establishment of Colonial rule in Africa.

0 replies on “Why Africa Is Important To The World”