I decided to revisit the question of how Christianity was used to Colonise Africa after the net was abuzz this week with the controversial story of Michael Job , a White American who billed his trip to Kenya as the second coming of Jesus Christ, sparking alarm and outrage after photos and video showing him dressed as Jesus Christ, and ‘blessing’ people out of a car’s sunroof began circulating.

Michael has since been deported by the Kenyan authorities, and the Pastors of the local Kenyan Church that had invited him to Kenya have also been arrested.

Nevertheless, we are still left asking ourselves how could this even still happen in Africa today?

Christianity and Colonialism In Africa

Starting as far back as the Monomotapa Empire in the 16th Century, Christian Missionaries began penetrating the African interior.

The trend would however pick up in the late 19th Century as explorers like David Livingstone and Henry-Morton Stanley explored deeper into the African interior with the professed intention of spreading the ‘Gospel and ‘Civilization’.

Ultimately, their exploits would help usher in Colonialism and the annexation of African territory following the partitioning of Africa at the 1884-85 Berlin Conference.

Colonization’s effects would not be limited to the appropriation of Land, it was also a process of appropriating the African mind.

Missionaries were the chief Social agents of the Colonial system.

Industrious, brave and armed with technical skills in Medicine, Education, Building etc, they ingratiated themselves to Africans by making available the benefits of their useful technical skills.

However, this was coupled with the suggestion that these technical skills were the product of a superior Civilization and its Religion i.e. Christianity.

The conflation of Technology and Psychology would prove effective as Missionaries became firmly implanted in African Nations across the Continent until they were able to gather favour with the Royal Families converting them to Christianity.

This process was accompanied with a simultaneous denigration of African culture and spirituality branding it as ‘demonic’ and essentially characterising it as ‘witchcraft’.

Missionaries would become integral to the Colonial Project serving as ‘Advisors’ to African Kings enabling the conclusion of Treaties such as the Rudd Concession that facilitated the British Occupation of Southern Africa.

Faced with the Technical and apparent Cultural superiority of Western Civilization, Africans began a process of Cultural re-orientation based on the model of Western materialism.

Christianity In Colonial and Post-Colonial Africa

Ironically, Missionary education served as the very means by which Africans were able to achieve Independence.

The Black Elite that would form the vanguard of the African Nationalist movement had been largely educated at Missionary Schools.

Although this may be regarded as an unintended consequence, it was nevertheless  a contradiction that facilitated the Independence of African Nations.

Whilst Christianity and Missionary Education were instrumental in the rise of African Nationalism, their impact on African Culture and African self-esteem were the complete opposite.

Africans continued to be subjected to both subliminal and overt messaging in which their culture was regarded as evil and it was continually impressed upon them that ‘Salvation’ lay in a White Jesus Christ figure.

This rudimentary messaging has still not changed, and it appears firmly implanted in the African mind.

As a child I remember being constantly bombarded by images of a gentle White Jesus followed by graphic and horrific images of events like the rapture and the end of days. 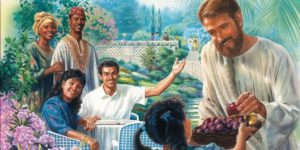 This primitive assault on the African mind has been heightened by Poverty which has also seen the emergence of the ‘Prosperity Gospel’, sparking a new Religious fervour reminiscent of the United States’ 19th Centry Baptist Revival.

Although Christianity as Religion forms part of what Richard Dawkins has termed the larger human ‘God Delusion’, the specific manner in which the delusion has played itself out in Africa is directly related to the Colonial and Post-Colonial experience.

Under these circumstances, its certainly embarassing and shocking but not inconceivable why some Africans would be duped into believing that a White Man from the United States is the second coming of Christ, just because he looks like the Jesus or Saviour they just saw in the last Church Book and have been taught to believe in all their lives.

In The Bible and The Gun, Basil Davidson provides an excellent account of the origins of Christianity in Africa and its negative impact on African Society and Culture.

Hopefully things will change otherwise Africa’s Political Independence is meaningless without independence of mind, pride in our own Culture and traditions.

For more on Pre-Colonial Africa, you can check out the archives here:

0 replies on “How Christianity Colonised Africa”