Mao Tse Tung was the founder of the People’s Republic Of China which was officially pronounced on 1 October 1949, following the success of the Chinese Revolution in which the Chinese people revered Mao Tse Tung as a Hero and not a Communist Villain.

Born out of the hardship of the Long March, the new nation of China under the leadership of Mao Tse Tung would also face dire domestic and international challenges especially in the Cold War era which would test Mao’s resilience and his reputation casting him in the role of both Hero and Villain.

The Chinese Revolution was a product of the the Chinese Communist Party, and following an internal struggle for Power with Chinese Nationalists under Sun Yet Sen, Mao retreated into the Chinese countryside to embark on what would become known as the ‘Long March’.

The Communists faced constant land and air attacks from Nationalist forces as well as starvation, but on October 20, 1935 the column reached the Province of Shaanxi and united with another Battalion of Red Army Troops marking an end to the Long March.

Mao emerged as the leader of the Communists and the War with the Nationalists was eventually won in 1949, and the Chinese Republic under the Leadership of the Revolution’s Hero, Mao Tse Tung was officially declared.

Mao Tse Tung’s eagerness to transform China into a Global Power would see him take a series of decisions that cast him in the role of a Villain.

Contributing to the transformation of Mao Tse Tung into what some considered a Villain was a series of reforms, the most famous of which are theGreat Leap Forward and the Cultural Revolution.

Both these policies created massive disruption in China and had a devastating effect on the people which resulted in diminished support for Mao Tse Tung as leader of the Communist Party.

In particular, the leadership in the Communist Party began to distrust Mao as selfish and inconsiderate because his policies of Agricultural Collectivization and Peasant Steel production led to massive famine and decline of the Industrial base as the steel that was produced was of very low quality.

The effect was to transform Mao from the Heroic Father of the Chinese Revolution to an Autocratic Villain.

The ‘Cultural Revolution’ also contributed to Mao Tse Tung’s image as a Villain because it resulted in Mass indoctrination and disrespect for Traditional Chinese values as children rebelled and persecuted their own Parents and elders in the name of Mao’s new Cultural ethos. 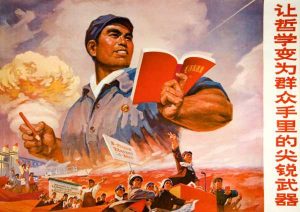 In the end, despite the upheaval caused by his policies, Mao Tse Tung was able to cling onto power until his death in 1976.

It would be left to his successor Deng Xiapong to transform China by reversing the effects of Mao’Tse Tung’s disastrous Policies.

Deng Xiapong reversed the economic damage to the Chinese Economy under Mao Tse Tung by introducing Capitalism with ‘Chinese Characteristics’ which began with the launch of Economic reforms in Free Economic Zones to encourage foreign investment.

Since the 1990s China adopted a very successful form of Centralised Capitalism which has seen it ascending to its status as a modern world power although the power and prestige of the Chinese Communist Party remain unchallenged.

In addition, China under Deng Xiapong was able to regain control of Hong Kong from the British, marking the end of British Colonial involvement in the region since the Opium Wars.

Mao Tse Tung has played the role of both Hero and Villain in the History of China.

His most heroic act was the founding of the People’s Republic Of China itself in 1949 after the Chinese Revolution. Nevertheless, some of his Policies were disastrous to the Chinese people and Economy and its safe to say he can be cast in the role of a villain particularly during the Cultural Revolution episode which succeeding in bolstering his control of China and the Communist Party through the youth.

In the final analysis China’s journey has been long, and perhaps illustrates Communism’s coming ‘full circle’ more than in any Country.

The Chinese Collectivist Experiment seems to have strengthened China since its now joined the ranks of the World’s Great Powers, but the cost remains etched in the collective memory of the Chinese people as Moa Tse Tung can be remembered as both the Hero that Liberated China and the Machiavellian Villain who did whatever he thought was necessary to retain his personal hold on power.