Fought on the Matebeleland and Mashonaland fronts against the British South Africa Company (BSAC), it represents an important chapter in Southern Africa’s responseÂ  to Colonialism.

The last straw was the misfortune of drought, rinderpest and locusts which was interpreted as a sign from the Ancestors to expel the British invaders. 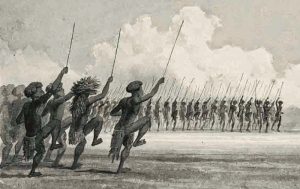 In Matebeleland, the Spiritual leader or Mlimo, encouraged the people to revolt against the British in March 1896 promising an end to the drought, locusts and rinderpest if the British were expelled from Matebeleland.

The Ndebele were particularly motivated to recover lands, cattle and wives that had been lost to British encroachment.

In Mashonaland, the resistance broke out in June 1896 under the leadership of two powerful Spirit Mediums, Mbuya Nehanda Nyakasikana and Sekuru Kaguvi.

After some sucsessful attacks on Farms, Mines and Colonial infrastructure by both the Shona and Matebele, the British were successful in putting down the Matebele rebellion first, and thereafter the Mashonaland revolt was also suppressed.

In 1898 Mbuya Nehanda and Sekuru Kaguvi were caught and executed, but Mukwati successfully avoidedÂ  capture, dying from natural causes some years afterwards.

Ultimately, the rebellious Shona and Matebele armies were no match for superior British firepower such as the Maxim Gun.

The Chimurenga resistance resulted in the consolidation of British control in what later became Rhodesia.

However, the leaders of the resistance like Nehanda and Kaguvi inspired future generations, and Zimbabwe would eventually obtain independence in 1980 after fighting a ‘2nd Chimurenga’ against the Rhodesian State.

The word Chimurenga has since been used to describe monumental shifts in Zimbabwe like the fast-track land reform program under Robert Mugabe in the 2000s dubbed the ‘3rd Chimurenga’.

Spells of Political and Economic volatility have characterised Post-Independence Zimbabwe, and perhaps Zimbabwe is on the path to a ‘final Chimurenga’.